The Pacific Northwest is the site of the Cascadia subduction zone, where an oceanic tectonic plate (the Juan de Fuca plate) is being pulled and driven (i.e., subducted) beneath a continental plate (the North American plate). Earthquakes along the fault that is the contact between the two plates, termed the interplate thrust or megathrust, may generate significant local tsunamis in the Pacific Northwest.

How do various parameters that describe an earthquake influence the resulting local tsunami? Such USGS research progressed in three phases.

Phase 2: A Stochastic Model for Potential Tsunamis in the Pacific Northwest - Effect on local tsunamis from spatial variations of slip during rupture

The nature of earthquake rupture is defined by many different parameters that can vary spatially and with time. Here we show how the following parameters affect local tsunamis:

During an earthquake, one side of the fault moves vertically and/or horizontally with respect to the other side. The distance the two sides move averaged over the rupture area is what we will call average slip. The relationship between fault slip and the permanent offset of the seafloor after earthquake rupture is linear. That is, if average slip for one earthquake (EQ 1) is twice that for another earthquake (EQ 2), the seafloor offset and the initial tsunami will be different also by a factor of two. Owing to propagation effects, however, there is a greater than linear relationship between the amplitude of the tsunami near shore and the amount of average slip. Therefore, the difference in the near-shore amplitude of the tsunamis generated by EQ 1 and EQ 2, for example, will be slightly greater than a factor of two. 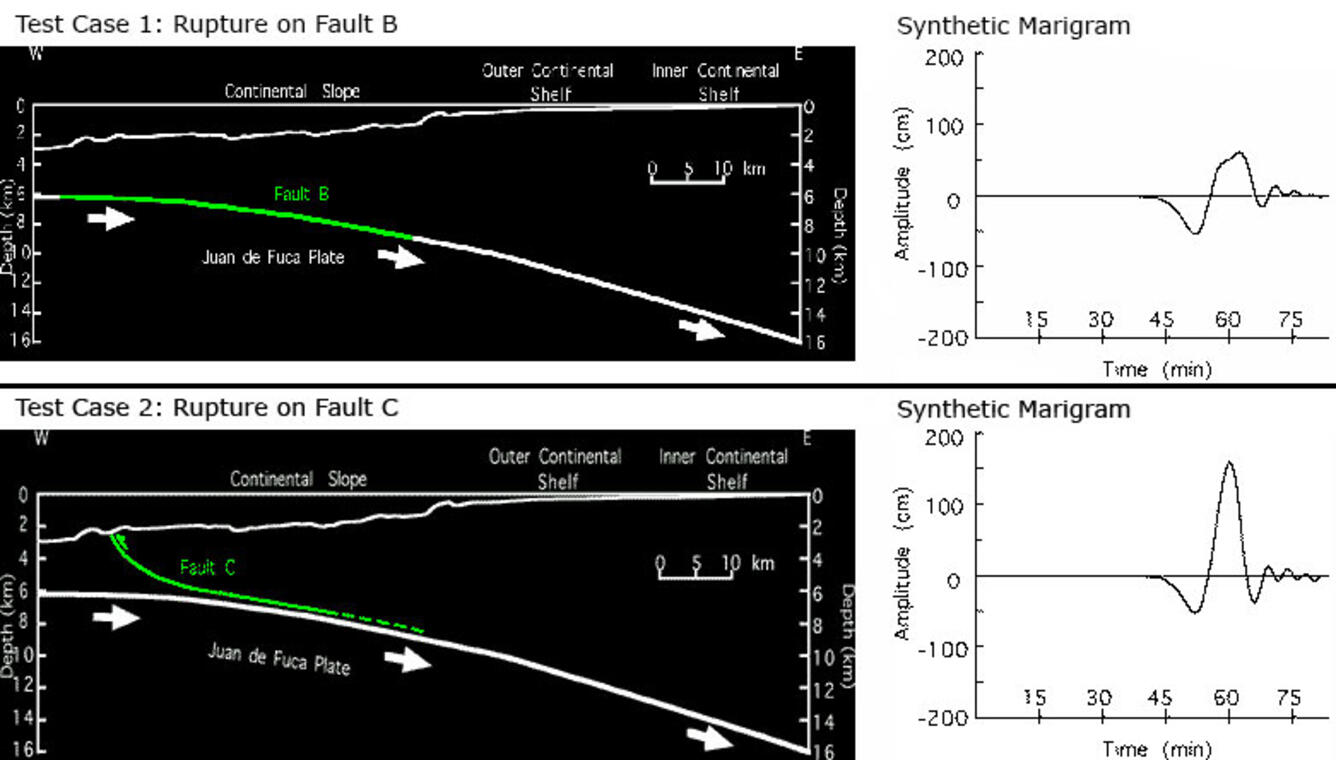 The size of the local tsunami also depends on how deep the earthquake ruptured within the earth. Shallow rupture will result in larger offset of the seafloor and hence, a larger initial tsunami, than a deep rupture earthquake. An example is shown below. The left part of the figure shows the portion of a fault that ruptures in green. The local tsunami that is generated from this rupture is shown below as a synthetic marigram (wave amplitude as a function of time). Fault C, shown in the second set of figures, ruptures much shallower in the earth and generates a substantially larger tsunami.

The figures above show a type of faulting known as thrust faulting, in which the overlying block moves upward and over the underlying block. Considered in 3 dimensions, however, the fault blocks could also move in-and-out of the page (screen) as shown by this perspective figure.

The parameters used to create this image are merely for illustrating the effect of oblique rupture on tsunami propagation. Certainly, variations in the chosen parameters would affect the amplitude of the tsunami and the physical location of coastal inundation.

Why would such details of rupture be important in terms of generating local tsunamis? When oblique faulting as described occurs, the vertical offset of the seafloor is considerably different than for the case of simple thrust faulting. The result is the generation of secondary tsunamis that initially travel in a different direction than the deep-ocean and local tsunamis shown in the rupture diagrams above. Let's look at an animation of a tsunami generated from oblique faulting to better understand the different waves generated by this type of earthquake.

These examples illustrate the complex relationship between the parameters that characterize earthquake rupture and the local tsunami that is generated. Presently, it is exceedingly difficult to devise likely scenarios of rupture along the Cascadia megathrust. Much work is presently under way by seismologists to determine the nature of earthquake rupture along major plate boundary faults. As more is learned about the nature of possible earthquakes in Cascadia, the hazards from local tsunamis can be better defined. See Phase 2 and Phase 3 (USGS Professional Paper 1661-B) of this research project.

#2. A Stochastic Model for Potential Tsunamis in the Pacific Northwest

Effect on local tsunamis from spatial variations of slip during rupture

In the first phase of research on potential tsunamis that may occur along the Pacific Northwest coast, we showed that the individual parameters of earthquake rupture (e.g., geometry of faulting, orientation of slip) have a significant effect on the local tsunami wavefield. For this reason, even though local tsunami runup generally increases with earthquake magnitude, there is substantial variation or scatter in this scaling relationship, as evidenced by average and maximum statistics of local observations.

Two observations are apparent in the figures shown here:

It is also important to note that these observations pertain to local tsunamis. There is considerably less scatter in the scaling relationship for distant tsunamis because of the smoothing effect of tsunami propagation on small-scale variations of the earthquake rupture process.

The observed scatter in the relationship between local runup and earthquake magnitude shown in the plot is caused by several different factors including water depth at the source, hypocentral depth, and rupture geometry (aspect ratio). In this study we focus on perhaps the largest source of this scatter: variation in the amount of slip throughout the rupture area.

We often think that during an earthquake, the fault slips a fixed amount. It serves not only as a common conception but also as a working assumption for many tsunami models (including models employed during the first phase of this study). An alternative and, perhaps, a more useful conception of earthquake rupture is that of a crack in which slip decreases to zero at the crack tip or at the edge of earthquake rupture. In Geist and Dmowska (1999) we demonstrate that incorporating "natural" slip variations into our tsunami generation model has a measurable effect on the local tsunami wavefield, in comparison to models that assume uniform slip throughout the rupture area. Moreover, we can use the slip distribution of an earthquake determined from global seismic observations to reconstruct the generated tsunami. Although reconstructing past tsunamis is a significantly worthwhile scientific endeavor for understanding the relationship between earthquakes and tsunamis (e.g., Geist and Zoback, 1999), an essential product of tsunami research is tsunami hazard assessments which we discuss next.

To determine the range of possible tsunami amplitudes for a given earthquake magnitude and location, a Monte Carlo-type simulation can be run, involving a large number of slip distributions. Statistics from the simulation could then be used for hazard planning. An example showing minimum, average, and maximum nearshore tsunami amplitude (not runup) for a section of the Pacific Northwest coastline is shown below. The horizontal gridpoint axis is distance measured parallel to the shoreline (approx. 3.5 km/gridpoint).

It is important to note that the technique described above only accounts for nearshore tsunami amplitude variations caused by different slip distributions. A complete hazard analysis would include variations in other source parameters, the effects of which are discussed in the first phase of our study of potential Pacific Northwest tsunamis.

The stochastic/Monte Carlo method provides the groundwork for an alternative way of forecasting local tsunami hazards. The third phase of our study focuses on forecasting tsunami hazards that also includes the probability of earthquake occurrence that would most likely involve methods similar to those used to formulate probabilistic estimates of ground shaking from earthquakes (see the USGS National Seismic Hazard Maps). Developing tsunami hazards maps in future will rely on the broad collaboration among the many scientific disciplines that are involved in tsunami research.

This chapter establishes the relationship among earthquake source parameters and the generation, propagation, and run-up of local tsunamis. In general terms, displacement of the seafloor during the earthquake rupture is modeled using the elastic dislocation theory for which the displacement field is dependent on the slip distribution, fault geometry, and the elastic response and properties of the

Local tsunamis and distributed slip at the source

Variations in the local tsunami wave field are examined in relation to heterogeneous slip distributions that are characteristic of many shallow subduction zone earthquakes. Assumptions inherent in calculating the coseismic vertical displacement field that defines the initial condition for tsunami propagation are examined. By comparing the seafloor displacement from uniform slip to that from an ide
January 1, 1996

The largest uncertainty in assessing hazards from local tsunamis along the Cascadia margin is estimating the possible earthquake source parameters. We investigate which source parameters exert the largest influence on tsunami generation and determine how each parameter affects the amplitude of the local tsunami. The following source parameters were analyzed: (1) type of faulting characteristic of
By
Pacific Coastal and Marine Science Center
January 1, 1996

The relationship between plate boundary forces and the observed stress field in the Pacific Northwest is established using numerical models of continental deformation. Because the orientation of the greatest horizontal principal stress throughout the Pacific Northwest differs considerably from the direction of convergence between the Juan de Fuca and North American plates, the relationship between
By
Pacific Coastal and Marine Science Center