There is a familiar saying that “good things come in small packages”, meaning that the size of something may not indicate its value or importance or quality. This is especially true for deep-sea biological communities at hydrothermal vents, including those at Escanaba trough.

Microbes, organisms that would fit in the tiniest of packages, are the foundation of these communities. They perform many key functions, not least of which is converting chemicals into energy, a process called chemosynthesis.

Hydrothermal vents often host tubeworms and clams, which rely on symbiotic microbes within their tissues, known as endosymbionts, to survive. These microbes transform hydrothermal chemicals to energy, providing food for these animals in exchange for a place to live.

Microbes also play key roles within sediments, influencing the biogeochemistry and availability of organic material that fuels animals that live in the mud, also known as infauna.

Previously published studies of the biological communities at Escanaba Trough from the 1980s revealed areas of active hydrothermal venting, surrounded by inactive sulfide areas and extensive sedimented seafloor. Characteristic vent fauna was found near the active venting, including chemosynthetic tubeworms and clams, along with limpets and various crustaceans.

Follow-up work in the early 2000s by Monterey Bay Aquarium Research Institute and partners revealed major changes in some of the previously explored areas. They noted a decline in vent activity in some areas, and consequently, a decline in vent-associated organisms. As hydrothermal activity declines, associated changes in the vent microbial communities can also occur, which can have cascading consequences to the types of animal communities that may be supported. This community gradient can span from symbiont-rich megafauna (e.g., tubeworms) to their subsequent decline and replacement due to lack of sufficient fluid flow.

A key aspect of the Escanaba Trough expedition was to visit and characterize areas that were previously mapped but never explored. In terms of biology and ecology studies, researchers wanted to understand how deep-sea communities change over the life cycle of hydrothermal systems, as active venting sites cool down or stop flowing, turning to inactive sulfide mounds and eventually becoming background, deep-sea environments.

Researchers wanted to address the following questions: Are inactive sites characterized by mostly active vent species, background species, or species unique to inactive sulfides, or some mixture? What are the community patterns along an inactive sulfide gradient? What geochemical drivers might be responsible for these patterns?

The Escanaba Trough expedition revisited some of the previously examined sites, as well as expanded to include several areas of possible inactive sulfides. By both revisiting historic sites and investigating new ones, researchers sought to understand how these communities change over space and time, linking those patterns to the underlying hydrothermal environment. 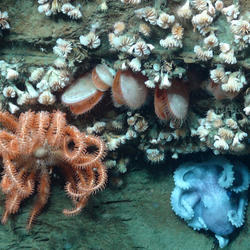 This project uses amplicon sequencing, and functional microarrays to examine the microbiomes of several deep-sea coral species, with priority given to species that are also of interest to the population genetics group: Desmophyllum dianthus, Lophelia pertusa, Enallopsammia sp., and Acanthogorgia sp. The project also uses metagenomics to survey benthic habitats including coral mounds, cold seeps...
Learn More
link
May 19, 2022