New Guinea is a seismically active region, the site of an arc-continent collision, where tectonic plates are converging and sliding past each other. The tectonic boundaries and faulting in this region are very complex.

A comprehensive discussion and listing of historical earthquakes and tsunamis in the region can be found at the Russian Academy of Sciences' Tsunami Laboratory and in an article by Everingham (1974).

The source mechanisms for previous shallow earthquakes in the region display a remarkable diversity in the type of faulting. (Read an explanation of "beachball" diagrams.) Near the July 17, 1998 event, however, most of the events are along steeply dipping reverse faults. Note the similarity in mechanism between the 5/14/82 event and the 7/17/98 event. Mechanisms to the south and east are mostly strike-slip events, whereas mechanisms to the west are mostly normal faulting events.

The bathymetry indicates that just offshore of the northern coast of New Guinea there is very steep and linear slope. It is possible that the relatively deep water near shore contributed to the unusual height of this tsunami. Shown here is the bathymetry in the region contoured at 200 m intervals from the 2-minute bathymetric data of Smith and Sandwell (1997) (Copyright).

In this figure, black circles indicate locations for the earthquake determined by the NEIC, Harvard, and the Earthquake Research Institute (ERI) at the University of Tokyo.

At present, too little is known about the July 17, 1998 earthquake and about the distribution of runup to formulate a quantitative model of the tsunami. The reported runups are unusually large for an earthquake of magnitude 7.1 (cf. Geist, 1998). Below, a descriptive or qualitative simulation of the tsunami is computed by making several assumptions about the source parameters of the earthquake. The model is for descriptive purposes only—a quantitative model awaits more information on the exact location of the earthquake and accurate measurements of runup. Of equal importance, the grid size used in this simulation is quite large and does not capture the nearshore behavior of the tsunami (cf. Titov and Synolakis, 1997). A full description of the assumptions and specifications of this model is listed below.

The animation shows how the July 17 tsunami might have looked from a vantage point above Papua New Guinea. The coastline shown in the animation is about 550 kilometers (340 miles) long.

The animation begins with the initial wave—which formed almost simultaneously with the earthquake that triggered the event—and shows how the initial wave was reflected from the island. Note other waves traveling east and west along the coast.

This animation does not show runup—the maximum elevation the water reached as it rose above the shoreline. Based on very preliminary data, this animation is a "descriptive model" of the tsunami. A more accurate simulation, or "quantitative model", can be developed when accurate measurements of the runup and more information about the earthquake that triggered the tsunami become available.

Please note that for display purposes, the tsunami wave heights in the animation are greatly exaggerated with respect to the bathymetry.

Although this animation graphically indicates the evolution of this tsunami, the simulated offshore wave heights are much less than the reported runups. Among international scientists, more highly refined models will be developed on the basis of higher resolution bathymetry, measured runup and inundation distributions, seismic source models, and more accurate representation of the hydrodynamics. As these models are developed and come online, links will be reported here.

Waveform modeling and comparison with observed records of the tsunami (NOAA)

Assumptions and Specifications for Animations

Please note that some U.S. Geological Survey (USGS) information accessed through this page may be preliminary in nature and presented prior to final review and approval by the Director of the USGS. This information is provided with the understanding that it is not guaranteed to be correct or complete and conclusions drawn from such information are the sole responsibility of the user.

Please copy and use these digital topography files for your applications. We are not responsible for errors in the depths. The depths have limited accuracy and should not be used for navigation.

The data contained in this digital file should not be used in any product sold for profit without the written consent of the authors.

Consent is not required for non-profit research use or for creating graphics for oral or poster presentations.

This copyright text must be copied and placed in the same directory as the digital data file. In addition, the copyright must be attached to any derivative digital topography grids that are intended for re-distribution. Our objective is to have the data distributed as widely as possible, but not sold.

This copyright also applies to the Land Elevation data.

Purpose: These data and information are intended for science researchers, students from elementary through college, policy makers, and general public. Figure intended both to illustrate bathymetric relief just offshore of the northern coast of New Guinea and to supplement discussion of the 1998 New Guinea tsunami.

Use_Constraints: Please recognize the U.S. Geological Survey (USGS) as the source of this information. Some USGS information accessed through this means may be preliminary in nature and presented without the approval of the Director of the USGS. This information is provided with the understanding that it is not guaranteed to be correct or complete and conclusions drawn from such information are the responsibility of the user. This information is not intended for navigational purposes. Any use of trade, firm, or product names is for descriptive purposes only and does not imply endorsement by the U.S. Government.

Below is a link to the USGS field study following the Papua New Guinea tsunami. 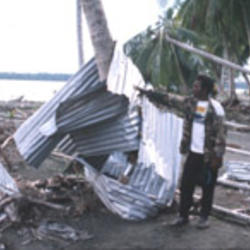 Erosion and sedimentation from the 17 July, 1998 Papua New Guinea tsunami

This paper describes erosion and sedimentation associated with the 17 July 1998 Papua New Guinea tsunami. Observed within two months of the tsunami, distinct deposits of a layer averaging 8-cm thick of gray sand rested on a brown muddy soil. In most cases the sand is normally graded, with more coarse sand near the base and fine sand at the top. In some cases the deposit contains rip-up clasts of m
January 1, 2000

The tsunami that struck Papua New Guinea on 17 July 1998 shortly after a Mw 7.0 earthquake (Figure 1) was one of the deadliest tsunamis in this century. At least 2,200 people died from this event, essentially destroying an entire generation in some communities. In the months following the tsunami, several international survey teams collected data in an attempt to better understand the cause of thi
By
Natural Hazards, Landslide Hazards, Geologic Hazards Science Center, Pacific Coastal and Marine Science Center
January 1, 1999

This chapter establishes the relationship among earthquake source parameters and the generation, propagation, and run-up of local tsunamis. In general terms, displacement of the seafloor during the earthquake rupture is modeled using the elastic dislocation theory for which the displacement field is dependent on the slip distribution, fault geometry, and the elastic response and properties of the