The Pacific Coastal and Marine Science Center geotechnical group investigates the causes of ground deformation and ground failure as a result of earthquakes, storms, and wave action 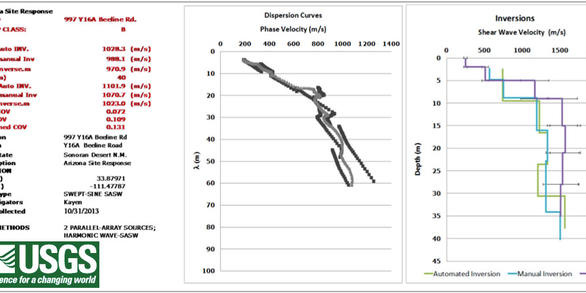 Prediction of the severity of ground failure in Quaternary deposits is a critical component of hazard studies. 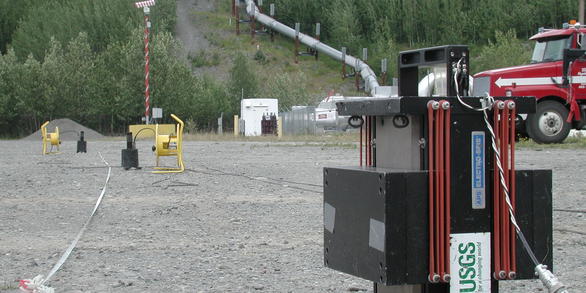 Learn about our field methods in geoengineering research around the world. 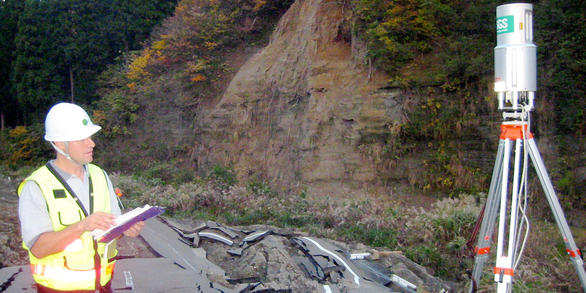 A collection of presentations on site-specific studies including Alaska, Japan, California, and more.

The Coastal and Marine Geology geotechnical group investigates the causes of ground deformation and ground failure as a result of earthquakes, storms, and wave action. The coastal urban regions of the Pacific margin of the United States are growing rapidly, putting increasing demands on coastal infrastructure and lifelines, such as highways, utilities and community services. These structures and services, as well as the general population that are located in the coastal zone, are at risk from ground deformation and landslides which are triggered by a variety of phenomena including episodic disastrous earthquakes and storms, long-term and seasonal changes in water table as a result of changing land use, and coastal erosion caused by natural response to changes in sea level and changes in sediment transport patterns caused by construction of dams, breakwaters and other coastal structures. Coastal ground failures can be significant contributors to longshore sediment load. Hence, increase in the frequency of landslides can in some cases also contribute to environmental degradation through local amplification of sedimentation in nearshore habitats.

Our coastal ground failures study group focuses on characterization of

These models are intended for scientists, engineers, and urban planners.

Ground failure is a general term which encompasses all types of downward movement of material. Ground failures occur in every state of our country and are annually responsible for an estimated 25 to 50 deaths and $1 to $2 billion in property damage (FEMA 1995). Researchers suggest that approximately 40 percent of the United States' population is either directly or indirectly affected by landslide events. Ground deformation and failure of liquefied ground can be severely damaging to buried utilities, fire-suppression water mains, and foundations and has a major contributor to urban conflagration following earthquakes.

What Are the Characteristics of Ground Failures?

The west coast of the United States is particularly susceptible to ground failure due to the significant amount of precipitation and the earthquake potential. These two natural agents act as triggering events for landslides.

The principal natural factors, which play a role in ground failure potential, are topography, geology, and precipitation. Areas with steep slopes are more susceptible to landslides than flat areas, whereas, liquefaction of soil during earthquakes has typically occurred in relatively flat coastal plain areas. In general the more precipitation an area experiences, and the higher the ground water table, the greater the potential for ground failures. Anthropogenic (human) factors also influence landslide potential. The major human induced factors are development of hilly terrain, irrigation, construction of highways, buildings, and railroads, mining activity, and forestry practices.

Landslides also can be grouped by the way in which they move and divided into four general types:

Slides: Slides are characterized by the downward displacement movement of material along one or more failure surfaces.

Flows: Flows are similar to slides but differ in that they are characterized by high water content and the disintegration of the failure into fluid-like movement.

Falls and topples: Falls and topples are movements in which masses of rock or other material fall from cliffs or other steep slopes. Earthquakes commonly trigger this final type of movement.

When large faults rupture and produce earthquakes, they generally deform the ground surface. Primary surface faulting, such as the 340 kilometer-long surface rupture associated with the 2002 Denali Fault earthquake, is the direct effect of movement on a seismogenic, or earthquake-producing fault. Rupture on nearby faults induced by the primary event (sympathetic rupture) may also produce surface faulting. Away from a surface fault rupture, ground deformations in soil and rock can produce secondary damage features that extend for tens and even hundreds of kilometers from the seismogenic fault. Ground failure and ground deformation associated with dynamic movements can form by a variety of mechanisms:

Liquefaction is a phenomenon associated with earthquakes in which sandy to silty, water-saturated soils behave like fluids. As seismic waves pass through saturated soil layers, the structure of the soil distorts and void spaces between soil particles (pores) collapse, causing deformation and ground failure. In general, young, loose sediment and areas with high water tables are the most susceptible to liquefaction. Sand boils and fissures are a common sign of liquefaction. Sand boils and fissures form when saturated sediment below the surface is ejected to the surface by elevated pore water pressure. Lateral spreads involves the movement of a relatively coherent surface crust of soil due to the liquefaction of underlying sediment. Horizontal movements of up to several meters is commonly observed after earthquakes in fills, coastal alluvium and river embankments. These deformations are a major contributor to economic loss and loss of services during earthquakes. Flow failure is another type of liquefaction-related ground failure and the most destructive. Flow failures occur when liquefied soils completely disintegrate during deformation and flow long distances down-slope, sometimes at high speed. Liquefied ground looses its capacity to support structure. The loss of bearing strength may result in the settlement, tilting or collapse of building.

Impacts to Ports and Harbors

Permanent seismic deformation can occur in any soil or rock when driving stresses exceed the mobilized capacity of the ground to resist shearing. During earthquake motions, permanent displacements accumulate in the ground for each cycle that induces slip along the failure surface. It is common for the shear strength of the ground to dramatically fall during this type of loading, causing increased displacements with subsequent cycles. In the most damaging case, the shear strength can fall below the down-slope stress, so that even when earthquake shaking stops the landslides continues to displace and even disintegrate into a high speed flow. All earthquake-induced landslides are caused by a combination of dynamic displacements during shaking and deformations associated with the interaction between the local sloping ground and changes in the internal properties of the slide material.

Landslides are common geohazards associated with natural drivers such as precipitation, land degradation, toe erosion by rivers and wave attack, and ground shaking. On the other hand, human alterations such as inundation by water impoundment or rapid drawdown may also destabilize the surrounding slopes. The Guobu slope is an ancient rockslide on the banks of the Laxiwa hydropower station reservoir
By
Natural Hazards, Coastal and Marine Hazards and Resources Program, Pacific Coastal and Marine Science Center
October 12, 2018

This study serves as an update to the Cetin et al. (2000, 2004) [1,2] databases and presents new liquefaction triggering curves. Compared with these studies from over a decade ago, the resulting new Standard Penetration Test (SPT)-based triggering curves have shifted to slightly higher CSR-levels for a given N1,60,CS for values of N1,60,CS greater than 15 blows/ft, but the correlation curves remai
By
Natural Hazards, Coastal and Marine Hazards and Resources Program, Pacific Coastal and Marine Science Center
October 1, 2018

The preceding companion paper presented the updating of the seismic soil liquefactiontriggering relationship of Cetin et al. [1], and compared the resulting updated relationship with the earlier version. In this second paper, a detailed cross-comparison is made between three triggering relationships: (1) Seed et al. [2], as slightly updated by the NCEER Working Group (Youd et al. [3]), (2) Boulang
By
Natural Hazards, Coastal and Marine Hazards and Resources Program, Pacific Coastal and Marine Science Center
October 19, 2017

Vertical one-dimensional shear wave velocity (VS) profiles are presented for strong-motion sites in Arizona for a suite of stations surrounding the Palo Verde Nuclear Generating Station. The purpose of the study is to determine the detailed site velocity profile, the average velocity in the upper 30 meters of the profile (VS30), the average velocity for the entire profile (VSZ), and the National E
By
Pacific Coastal and Marine Science Center
April 5, 2017

Surface wave method was used for the estimation of Vs vs depth profile at 10 strong motion stations in Greece. The dispersion data were obtained by SASW method, utilizing a pair of electromechanical harmonic-wave source (shakers) or a random source (drop weight). In this study, three inversion techniques were used a) a recently proposed Simplified Inversion Method (SIM), b) an inversion technique
By
Pacific Coastal and Marine Science Center
July 1, 2015

Vertical one-dimensional shear wave velocity (Vs) profiles are presented for 25 strong-motion instrument sites along the Mid-Atlantic eastern seaboard, Piedmont region, and Appalachian region, which surround the epicenter of the M5.8 Mineral, Virginia, Earthquake of August 23, 2011. Testing was performed at sites in Pennsylvania, Maryland, West Virginia, Virginia, the District of Columbia, North C
By
Pacific Coastal and Marine Science Center
January 23, 2015

One-dimensional shear-wave velocity (VS ) profiles are presented at 50 strong motion sites in New South Wales and Victoria, Australia. The VS profiles are estimated with the spectral analysis of surface waves (SASW) method. The SASW method is a noninvasive method that indirectly estimates the VS at depth from variations in the Rayleigh wave phase velocity at the surface.
By
Pacific Coastal and Marine Science Center
September 10, 2013

Shear-wave velocity (Vs) offers a means to determine the seismic resistance of soil to liquefaction by a fundamental soil property. This paper presents the results of an 11-year international project to gather new Vs site data and develop probabilistic correlations for seismic soil liquefaction occurrence. Toward that objective, shear-wave velocity test sites were identified, and measurements made
By
Pacific Coastal and Marine Science Center
August 30, 2013

Human occupation in Grand Canyon, Arizona, dates from at least 11,000 years before present to the modern era. For most of this period, the only evidence of human occupation in this iconic landscape is provided by archeological sites. Because of the dynamic nature of this environment, many archeological sites are subject to relatively rapid topographic change. Quantifying the extent, magnitude, and
By
Energy and Minerals, Energy Resources Program, Mineral Resources Program, National Laboratories Program, Science and Decisions Center, Groundwater and Streamflow Information Program, Geology, Minerals, Energy, and Geophysics Science Center