This effort focused on understanding the patterns and scalability of roughness and topographic complexity of marine habitats, such as coral reefs.

For coral reefs, TC influences a wide range of biological, chemical, and physical aspects, such as water flow and, consequently, nutrient uptake and mass transfer rates, species richness and biomass, and both refuge and larval-settlement space. Because of these impacts, quantifying and mapping the spatial variability in TC is important to understanding the functioning of a coral reef ecosystem.

Effort was focused on developing algorithms for quantifying TC, with emphasis on fractal geometry principles. Studies have been completed for portions of Biscayne National Park and the island of Navassa.

Within sight of Miami, Biscayne National Park lies at the northern extent of the Florida reef tract and occupies a carbonate platform seaward of Hawk Channel. The park encompasses approximately 700 km2, roughly 95% of which is underwater habitat, including numerous patch reefs and a discontinuous series of shelf-edge, bank-barrier reefs along the seaward boundary. Information about this study is available in the Journal of Coastal Research article "A Multiscale Analysis of Coral Reef Topographic Complexity Using Lidar-Derived Bathymetry."

Navassa Island is located approximately 50 km west of the southwestern tip of Haiti, and is an uninhabited, pear-shaped island 4.64 km2 in area. In 1999, Navassa Island and a 12-mile radius of marine territory were designated as a National Wildlife Refuge under the jurisdiction of the U.S. Fish and Wildlife Service. Information about this study is available in the Geophysical Research Letters article "Topographic complexity and roughness of a tropical benthic seascape" and related USGS Data Series "Fractal Analysis of the Navassa Island Seascape."

Below are research tasks and science projects associated with this research. 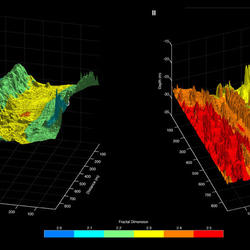 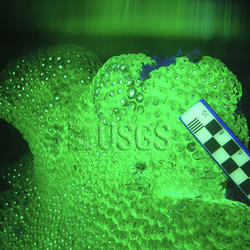 Fluorescence is an often overlooked property of reef-building corals that can improve the classification of reef habitats from imagery and provide diagnostic information on corals.
By
St. Petersburg Coastal and Marine Science Center
link
March 5, 2018

Fluorescence is an often overlooked property of reef-building corals that can improve the classification of reef habitats from imagery and provide diagnostic information on corals.
Learn More
link 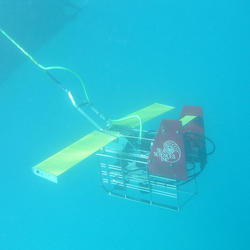 This release provides the numerical results of the fractal analyses discussed in Zawada and others (2010) for the Navassa Island reefscape. The project represents the continuation of a U.S. Geological Survey (USGS) research effort begun in 2006 (Zawada and others, 2006) to understand the patterns and scalability of roughness and topographic complexity from individual corals to complete reefscapes.
By
St. Petersburg Coastal and Marine Science Center
December 29, 2010

Topographic complexity and roughness of a tropical benthic seascape

Topographic complexity is a fundamental structural property of benthic marine ecosystems that exists across all scales and affects a multitude of processes. Coral reefs are a prime example, for which this complexity has been found to impact water flow, species diversity, nutrient uptake, and wave-energy dissipation, among other properties. Despite its importance, only limited assessments are avail
By
St. Petersburg Coastal and Marine Science Center
January 1, 2009

Coral reefs represent one of the most irregular substrates in the marine environment. This roughness or topographic complexity is an important structural characteristic of reef habitats that affects a number of ecological and environmental attributes, including species diversity and water circulation. Little is known about the range of topographic complexity exhibited within a reef or between diff