Birds as Indicators of Contaminant Exposure in the Great Lakes Completed

Story Map: Utilizing Tree Swallows as Indicators for Contaminants in the Great …

Objectives 1 and 2 - Exposure data will concentrate on several classes of new and emerging contaminants, such as the now ubiquitous flame retardants (polybrominated diphenyl ethers [PBDCs]) and stain repellents (perfluorinated compounds [PFCs]).These data will be important in understanding the distribution of these relatively-little studied chemicals in birds. We will be gathering data on several well-studied chemical classes (PCBs, mercury, dioxins) as well because these can still be present in the environment at possible levels of concern.

Objective 3 - Effects of environmental contaminants on birds were first brought to the nation’s attention by Rachel Carson in her seminal book Silent Spring. Since then birds have been used effectively in contaminant effect assessments. Project 80 will be measuring numerous different types of endpoints ranging from genetic up to population-level endpoints.

Objective 4 - Cleaning up contaminated areas is an important component of the GLRI program. Equally important is assessing how effective those remedies have been.Project 80 will provide important documentation of remedy effectiveness.

A particular emphasis of GLRI as a whole is to make physical improvements to locations that result in a cleaner, safer, and better environment. One measure of this progress is the de-listing of Areas of Concern by removing Beneficial Use Impairments (BUIs). Project 80 provides data specific for two important BUIs: 'Degradation of Fish and Wildlife Populations' and 'Bird or Animal Deformities or Reproduction Problems'.

Tree swallows nest across the northern half of the U.S. and because they nest in artificial nest boxes can be attracted to specific areas of interest. Tree swallows are very numerous so they are not as difficult to find and study as other avian species.

Swallows will nest in more diverse aquatic habitats within their breeding range than most other avian species - including highly industrial and urban locations where other species are often rare.

Greater than 85% of swallow’s diet are benthic aquatic insects and they feed within ~ 1 km of their nest box so contamination in their tissues are closely tied to sediment contamination and the cleanup of those sediments. The short, consistent food chain makes data interpretation easier and more direct.

The level of clean-up achieved can be readily quantified by the swallows. They integrate over appropriate time and spatial scales. Tree swallows are relatively easy and efficient to study. Because they nest in boxes, swallows can be attracted to almost any area where data are needed. By putting up many (20 – 50) nest boxes adequate sample sizes can be generated which results in strong statistical power to detect trends through time and to quantify adverse effects. 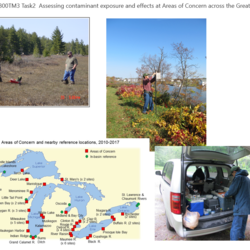 The Great Lakes Water Quality Agreement designated 31 Areas of Concern (AOCs) across the Great Lakes. The AOCs are geographical areas where significant beneficial use impairment has occurred as a result of human activities. A beneficial use impairment (BUI) relates to a change in the chemical, physical, or biological integrity of the Great Lakes system sufficient to cause any of the 14 conditions...
By
Upper Midwest Environmental Sciences Center
link
December 10, 2019 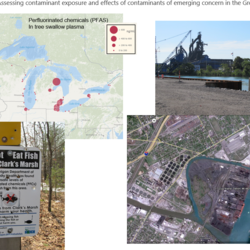 The Great Lakes Water Quality Agreement, in addition to designating 31 Areas of Concern (AOCs) across the Great Lakes, also identified contaminants of emerging (CECs) and mutual concern (CMCs) that warranted additional work not only at AOCs but elsewhere within the Great Lakes Basin.
By
Upper Midwest Environmental Sciences Center
link
December 9, 2019

The Great Lakes Water Quality Agreement, in addition to designating 31 Areas of Concern (AOCs) across the Great Lakes, also identified contaminants of emerging (CECs) and mutual concern (CMCs) that warranted additional work not only at AOCs but elsewhere within the Great Lakes Basin.
Learn More

Tree swallow, Tachycineta bicolor, nestlings were collected from 60 sites in the Great Lakes, which included multiple sites within 27 Areas of Concern (AOCs) and six sites not listed as AOCs from 2010 to 2014. Nestlings, approximately 12 days-of-age, were evaluated for ethoxyresorufin-O-dealkylase (EROD) activity, chromosomal damage, and six measures of oxidative stress. Data on each of these biom
By
Ecosystems, Contaminant Biology, Upper Midwest Environmental Sciences Center
December 15, 2016

Contaminant exposure of tree swallows, Tachycineta bicolor, nesting in 27 Areas of Concern (AOCs) in the Great Lakes basin was assessed from 2010 to 2014 to assist managers and regulators in their assessments of Great Lakes AOCs. Contaminant concentrations in nestlings from AOCs were compared with those in nestlings from nearby non-AOC sites. Polychlorinated biphenyl (PCB) and polybrominated diphe
By
Ecosystems, National Wildlife Health Center, Upper Midwest Environmental Sciences Center
July 22, 2016

Tree swallows, Tachycineta bicolor, were sampled across the Great Lakes basin in 2010 through 2015 to provide a system-wide assessment of current exposure to organic contaminants. The results provide information identified as critical by regulators to assess the “bird or animal deformity or reproductive problems” beneficial use impairment. Eggs were collected from 69 sites across all 5 Great Lakes
By
Ecosystems, Contaminant Biology, Environmental Health Program, National Wildlife Health Center, Upper Midwest Environmental Sciences Center