Groundwater is a heavily used source of water in the Virginia Coastal Plain. Long term and widespread groundwater withdrawals have resulted in regional water-level declines, and created the potential for saltwater intrusion. Sound management of this vital resource relies on continual improvement of the scientific understanding of the aquifer system.

To gain knowledge of hydrogeologic conditions and processes in the Virginia Coastal Plain that will facilitate sound water-resource management.

Knowledge is advanced of the regionally extensive groundwater system of the Coastal Plain of Virginia and adjacent states. Ongoing needs are addressed for understanding changing groundwater conditions and associated hydrologic processes of this increasingly developed, multi-state water resource. Hydrologic data and information are critical to insuring sound management and continued viability of a major water supply to millions of citizens.

The Atlantic Coastal Plain spans nearly the entire U.S. east coast, and in Virginia occupies an area of 13,000 square miles. The Coastal Plain is underlain by a wedge of regionally extensive, eastward dipping strata of generally unconsolidated sediments, most of which were deposited over basement bedrock by streams and deltas during the Cretaceous Period, and by the Atlantic Ocean during the Tertiary Period. Also during the Tertiary Period, impact of an asteroid or comet created a 50-mile wide crater containing a unique assemblage of materials, now buried 1,000 feet below the surface.

Virginia Coastal Plain sediments form a series of hydrogeologic units. Permeable sediments through which most groundwater flows are designated as aquifers, and less permeable sediments that restrict flow are designated as confining units or zones. The aquifers have been a heavily and increasingly used water resource in Virginia for many decades, with a current withdrawal rate of nearly 140 million gallons per day. As a result, groundwater levels have declined by as much as 200 feet, and flow gradients have been altered to create the potential for saltwater intrusion.

In order to manage the groundwater resource, State and local agencies have maintained a sound scientific understanding of Virginia Coastal Plain hydrogeology through a cooperative program of investigation with the U.S. Geological Survey (USGS). A hydrogeologic framework and computer model of the aquifer system developed by the USGS during the 1980s was adapted by the agencies to evaluate the potential effects of existing and proposed withdrawals. With discovery of the Chesapeake Bay impact crater and other newly emerged geologic relations, and further stress on the flow system imposed by ongoing groundwater withdrawal, a revised hydrogeologic framework and two computer models have since been developed to provide resource-management efforts with a contemporary analysis of groundwater conditions. In addition, the chemical quality of groundwater in the Virginia Coastal Plain has been described based on the revised hydrogeologic framework.

Currently, other poorly known aspects of the aquifer system are being investigated that pose significant implications for continuance of the water supply. All results are tailored toward meeting the ongoing needs of water-resource management. 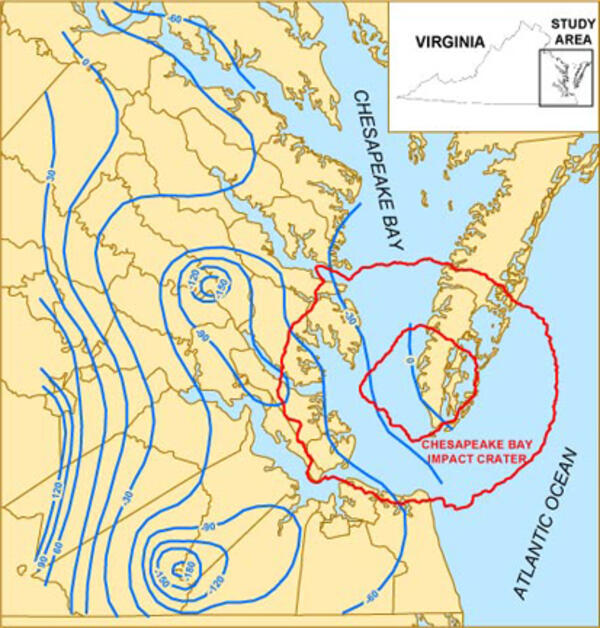 Groundwater-quality data and regional trends in the Virginia Coastal Plain, 1906-2007

Simulation of Groundwater-Level and Salinity Changes in the Eastern Shore, Virginia

Groundwater-level and salinity changes have been simulated with a groundwater model developed and calibrated for the Eastern Shore of Virginia. The Eastern Shore is the southern part of the Delmarva Peninsula that is occupied by Accomack and Northampton Counties in Virginia. Groundwater is the sole source of freshwater to the Eastern Shore, and demands for water have been increasing from domestic,
By
Water Resources, Virginia and West Virginia Water Science Center
March 6, 2008