Ecology and Conservation of Amphibians in Northern California Active

This project improves our understanding of the ecology of amphibians in northern California and evaluates methods of managing landscapes and these imperiled species. In particular, Dr. Brian Halstead examines the distribution and demography of amphibians to understand factors that affect where amphibians are found and how populations change. He further explores the relationships of amphibians with their abiotic and biotic environments to understand important components of habitats for amphibians, how they interact with competitors and predators in the environment, and how disease and individual characteristics affect vital rates.

Amphibians are declining worldwide, and although many factors have been proposed as causative agents of declines, none has been identified as the smoking gun. Indeed, recent research suggests that different agents are responsible for declines in different regions of North America. The variety of factors affecting amphibian populations is facilitated by the biphasic life cycle of many species, which exposes them to many different stressors as they progress from aquatic eggs and tadpoles to terrestrial juveniles and adults. Amphibians are therefore not only of conservation concern themselves, but they also serve as sentinel species that could be early indicators of ecosystem change and stress.

Occupancy: To estimate the probability of occurrence of amphibians, we typically use replicated surveys at multiple sites to account for the imperfect detectability of amphibians. Shorelines of ponds, streams, or meadow pools are carefully surveyed for all life stages of all amphibian species.  If necessary, observed amphibians are captured by hand or with a dip net to verify species. Observers keep a tally of each life stage of each species. Alternative survey methods, such as detecting amphibian DNA in water samples (eDNA) are also used in some circumstances.

Abundance and Demography: Estimation of abundance and demographic rates of amphibians is typically accomplished with capture-mark-recapture (CMR) methods. Like occupancy surveys, CMR surveys consist of visual encounter surveys of pond, stream, and pool margins; unlike occupancy surveys, however, an attempt is made to capture by hand or dip net each observed amphibian of the target species.  Captured individuals are implanted with a unique passive integrated transponder (PIT) tag, measured, examined to determine sex, and released at the location of capture. The location of each capture is determined with handheld global positioning system (GPS) receivers.

In some cases, we use counts of egg masses as an index of abundance. The advantages of egg mass counts are that egg masses have higher detection probabilities than individual adult amphibians, surveys require less time and expense, and because they are stationary and persistent, they can be surveyed under ideal conditions for detection. The disadvantages of egg mass counts are that individual survival probabilities of adults cannot be estimated and they assume that each individual female deposits one egg mass per year, which is difficult to verify.

Egg mass counts are conducted throughout the breeding season of the target amphibian species, and consist of a single observer systematically searching an entire body of water (pond or pool) or section of stream for egg masses.  Each observed egg mass is given a unique identifying number with a flag, measured for volume (cm3), and the number and Gosner stage of developing embryos is estimated. Visual surveys are repeated throughout the breeding period to document the deposition of new egg masses and the disappearance or hatching of previously observed egg masses.

Amphibian Habitat Relationships: Amphibian-habitat relationships will be evaluated using the occupancy and demographic studies outlined above when habitat characteristics are used as predictor variables for occurrence or demographic rates. In addition to these studies, we examine amphibian-habitat relationships in more detail using radio telemetry. To estimate habitat use and selection, we estimate the percent cover of structural microhabitats and specific vegetation types or species within an individual’s location, with exact microhabitats and vegetation types recorded depending on the species and site.  We then collect the same data at a nearby random site to estimate the microhabitats and vegetation types available to that individual in a paired case (amphibian location)-control (random location) design. In many cases, these microhabitat analyses are supplemented with GIS-based habitat selection studies at larger spatial scales.

In the lab we analyze radio telemetry data by several different methods, depending on the response variable. Movement distances and rates are examined to evaluate the influence of individual characteristics, date, and environmental characteristics on amphibian movements.  We also estimate activity centers and home ranges, selection of microhabitats, and survival rates with the data we collect.

Species Interactions: Amphibian interactions with other species are typically evaluated as part of other studies, including occupancy, demography, and radio telemetry studies.  In these cases, we often use the presence or abundance of an interacting species to evaluate their effects on amphibian occurrence or demography.  Examples of this approach would be to evaluate whether the presence of predators, such as fish or snakes, affects the probability of occurrence of amphibians or their demographic rates.  In other cases, we employ additional methods to examine species interactions.  For example, we often swab amphibians to test for the presence of pathogens such as Batrachochytrium dendrobatidis.  The presence or quantity of pathogens can then be used as predictor variables for survival probabilities.  We submit dead or dying amphibians to the U.S. Geological Survey National Wildlife Health Center for necropsy and culture to evaluate potential pathogens, and provide information to national databases on the occurrence of amphibian diseases. 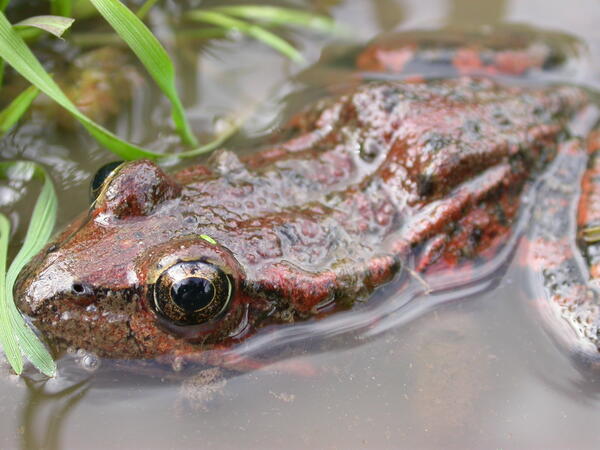 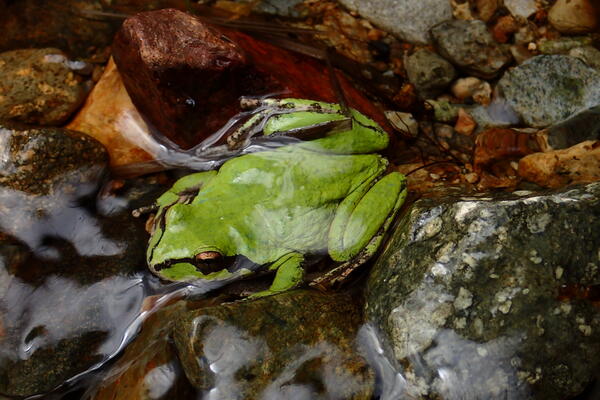 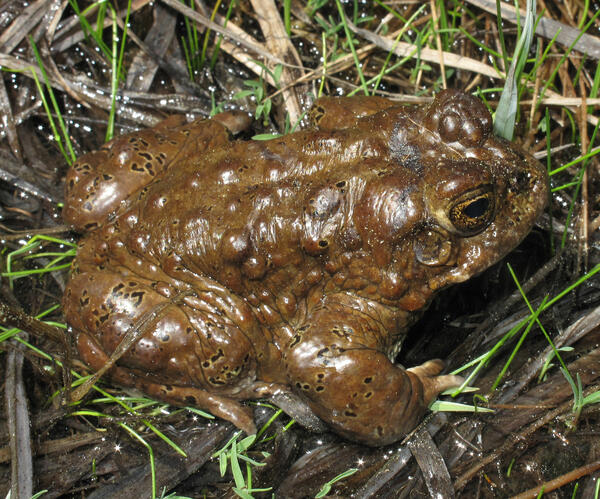