Dr. Kathleen Longshore’s goal is to understand how predator/prey relationships, disease and human-caused disturbance work separately and synergistically to impact bighorn sheep populations under variable ecological stress. Information from this project will provide managers with an understanding of specific and regional impacting factors that contribute to impact variation in population trends. 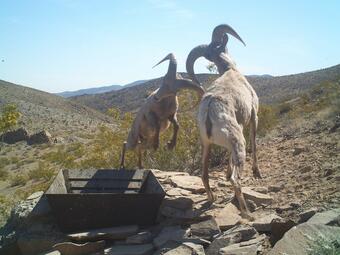 Desert bighorn sheep (Ovis canadensis) are charismatic ungulates that continue to provide valued experiences for wildlife enthusiasts, photographers, hunters, and native peoples. In the early 1800s, estimates of bighorn sheep numbers in North America were greater than 500,000. By the 1960s, numbers had declined to less than 10,000. These declines were attributed to competition and diseases from domestic livestock, excessive hunting, usurpation of watering areas, and human-caused habitat changes. Due to conservation measures, since the 1960s, total numbers increased close to 20,000. However, compared with estimates of pre-European numbers, population levels today remain low. Present day sheep populations continue to be impacted by a number of factors that cause population declines. Most important are disease, predation, and changes in habitat conditions due to direct and indirect direct human activity (e.g., urbanization, recreation, and military activities). Research under this program is designed to provide scientific information on how multiple factors may interact to bring about ecological changes in bighorn sheep populations and to provide tools for resource managers to use in adaptive management that is designed to preserve these populations.

Disease: Bighorn sheep are susceptible to a number of diseases that are caused by parasites, viruses and bacteria. The most common include, Infectious Bovine Rhinotracheitis (IBR), Bovine Respiratory Syncytial Virus (BRSV), Parainfluenza 3 (PI-3), Leptospirosis, Epizootic Hemorrhagic Disease (EHD), Bluetongue (BTV), Anaplasmosis, contagious ecthyma, or sore mouth, scabies (caused by infestations of Psorpotes mites), sinusitis (infestations of nasal bot fly larvae), epizootic hemorrhagic disease (EHD), blue tongue (viral infection), Malignant Catarrhal fever (MCF) and pneumonia (from a bacterial complex, including, Bibersteinia trehalosi, Mannheimia haemolytica, and Mycoplasma ovipneumonia, etc.). Of these, respiratory disease remains the biggest impediment to sustaining bighorn sheep populations. One hundred and seventy five die-off incidents occurred from the 1970s through 2014, resulting in the loss of over 14,000 adult bighorn. Over 75 herds have experienced three or more years of poor lamb recruitment post disease event. Bacteria known as Mycoplasma ovipneumoniae (M. ovi) is recognized as a primary causative agent driving epidemic respiratory disease (i.e. pneumonia) in bighorn sheep. Additional bacteria, including Pasteurellaceae, as well as respiratory viruses, and other emerging factors (e.g., paranasal sinus tumors) likely contribute to the severity of disease in individuals or herds. Bighorn sheep do not have immunity to the types of pneumonia-causing bacteria found in domestic sheep, thus exposure to these bacteria can be catastrophic. Initial spillover of M. ovi may occur via contact with domestic sheep or goats, and if established, can subsequently be circulated within and between populations of wild sheep or mountain goats.  Following pathogen spillover several herd outcomes are documented, ranging from little to no impact on health and recruitment, to all age pneumonia die-offs, followed by years of pneumonia deaths in lambs. Determining what impacting factors on a herd contribute to this variation in herd response to respiratory disease, and how management actions can improve post-disease herd performance is a key goal for bighorn sheep managers across North America.

Predation: Bighorn sheep die from a variety of causes other than disease, including predation, and accidents. Various predators, including mountain lions (Puma concolar), coyotes (canis latrans), bobcats (Lynx rufus), and golden eagles (Aquila chrysaetos) kill wild sheep in the Mojave Desert. Mountain lions are usually the primary predator of bighorn sheep and can be the single largest source of mortality in areas where bighorn range overlaps or is immediately adjacent to higher density mule deer or elk populations. Studies have shown that in some cases, significant losses of bighorn sheep can be attributable to relatively few mountain lions that may have shifted their prey selection to concentrate more on bighorn sheep. Desert bighorn sheep occupy mountainous terrain, due to the nature of this habitat  (their populations are generally small. Consequently, one or a few mountain lions can have a potentially large influence on population dynamics, even if bighorn sheep are a relatively small proportion of their prey. This predation can be periodic, and can be viewed as a stochastic influence because it can greatly depress annual adult survivorship. Mountain lion predation can act as a population destabilizing factor because it can overpower the influences of other factors on desert bighorn sheep population dynamics and cause rapid population declines. 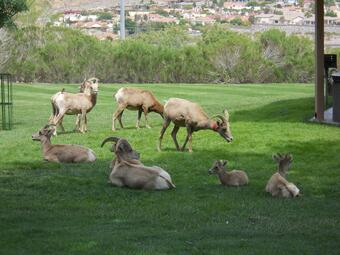 Human disturbance: Both urban development and outdoor recreation can have significant consequences for wildlife, making it increasingly important to expand our understanding of how these disturbances impact sheep populations. Both can be a major contributor to habitat loss, and have been suggested as significant causes for population declines. Human disturbance was also a primary factor prompting the listing of the California peninsular population of desert bighorn sheep (O. c. cremnobates) as an endangered population by the U.S. Fish and Wildlife Service in 1999. Roads and highways can stop movement between neighboring populations and result in habitat fragmentation and loss of connectivity between populations. Under some circumstances however, sheep may grow accustom to predictable human activity, including highway traffic, hiking, and aircraft. Additionally, some disturbed areas such as parks, golf courses, suburban lawns, etc., can serve as strong attractants to bighorn sheep. However, sheep have been known to abandon otherwise optimum habitat, either temporarily or permanently, when the limit of their tolerance to disturbance is exceeded. A significant loss of habitat can result in a reduction in the population’s carrying capacity. Less directly, energetic losses due to flight, loss of foraging time, and an increase in cortisol levels, can cause deleterious effects on physiology, behavior and the accumulation of fat reserves, thus leading to a reduction in survival and reproductive success of individuals.

Predicting the reaction of bighorn sheep to human-caused disturbance has been difficult. Responses can range from habitat abandonment and eventual extirpation of the population, to habituation and attraction of sheep to resources located in areas subject to disturbance. A theoretical framework for making predictions and for understanding why particular responses occur has not been available until recently, when economic models of antipredator behavior were applied to disturbance studies. Using this framework, the following hypotheses can be used to predict responses of sheep to human disturbance. When disturbed, individuals will evaluate the costs and benefits of relocating to a less disturbed location based on factors such as: (1) the quality of the area currently being occupied; (2) the distance, quality, and availability of alternative sites; and (3) the relative predation risk and density of competitors and associates or allies. Our goal is to develop a predictive model of bighorn sheep response to anthropogenic disturbance that can be used by resource managers to detect conditions under which sheep populations may be under risk due to urban development and human recreation activities. However, simple models do not capture the complexity of natural systems, particularly when studying animal behavior. Tolerance to disturbance can vary among populations and among individuals. Development of a predictive model using data from sheep that are subject to a variety of environmental conditions and differing types and intensities of human activity can provide an important tool designed to detect thresholds of tolerance to disturbance and allow for adaptive management of the co-existence of bighorn sheep and humans in wildland settings.

Goals for this program are to:

2) Provide tools and techniques for science based management 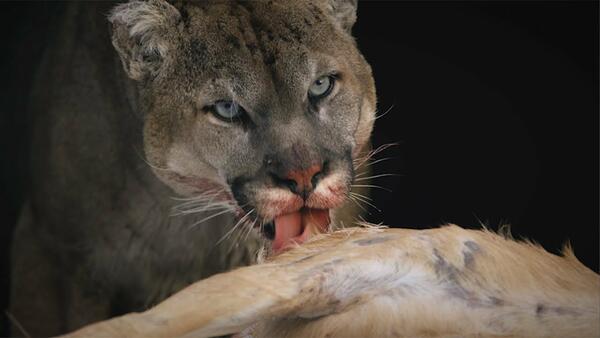