Ecology and Conservation of Golden Eagles in the Mojave Desert Active

Dr. Kathleen Longshore, in collaboration with Dr. Todd Esque, provides information to project the possible conflict between losses of habitat for foraging involved in the proposed development of alternative energy installations in the Mojave Desert and help develop advanced conservation efforts for the golden eagle. Information from this project will also inform California’s Desert Renewable Energy Conservation Plan within the Mojave Desert.

Eagles are a public trust resource and are protected federally by the Bald and Golden Eagle Protection Act (16 U.S.C. § 668) and by the Federal Migratory Bird Treaty Act (16 U.S.C §703-711). Golden eagles are listed by the California Department of Fish and Game (CDFG) as Fully Protected. In Nevada, golden eagles are protected under Revised Statutes 503.610 and are listed in the Nevada Comprehensive Bird Conservation Plan as a Conservation Priority species (GBBO 2010). Designation of the golden eagle in California and Nevada highlights the potential vulnerability within this region and need for increased monitoring and conservation attention by Federal, State, and private organizations.

Renewable energy is important for a clean energy and an energy-independent strategy. Today wind and solar energy industries are growing rapidly and large-scale installations are being constructed, with more proposed in the Mojave and Colorado Deserts of the US. The Bureau of Land Management (BLM) is currently drafting an Environmental Impact Statement for a six-state solar energy program which identifies priority areas, Solar Energy Zones (SEZ), for solar development on BLM-administered lands. Currently, two SEZs are proposed on public lands for California and five for Nevada, totaling 210,000 acres within the Mojave Desert. These areas are slated for 80% industrial development (168,000 acres).  In southern California, BLM is developing the Desert Renewable Energy Conservation Plan (DRECP) to provide long-term protection and perpetuation of biological diversity while facilitating the review and approval of renewable energy projects in the Mojave and Colorado deserts in California.

Renewable energy will have the potential to impact golden eagles at all stages of their life history if not undertaken with careful consideration for the species and for the health of the ecosystem. Wind energy plants impact golden eagles through direct mortality from collisions as well as possible displacement. Potential risk from the solar industry is mostly unknown, but likely indirect, occurring through loss of foraging habitat. Currently, there is little information about how eagles in the Mojave Desert, including BLM’s proposed SEZs, are impacted by loss of foraging habitat and prey base from development of these large areas. To develop conservation plans that will lessen the potential losses associated with solar energy development, and to reach a “no net loss” or population-increasing standard. Resource managers are in need of spatially explicit demographic analyses, models of golden eagle populations, and models linking variability in environmental conditions (e.g. habitat, prey availability and/or abundance climate change) with eagle vital rates and the rate of population change.

A preliminary examination of monitoring and survey data from the California and Nevada deserts reveals that estimates of key parameters to construct stage based demographic models are not available for golden eagle populations in the Mojave Desert. Information on distribution of nest sites, nest occupancy, and number of nestlings is available for many areas, but estimates of reproduction (number of fledglings), numbers of floaters, migrants, and sub-adults, are unknown, as are survival rates and territory size of reproducing adults. The available data can, however, be used provide spatial/temporal patterns of nest occupancy and numbers of young produced (nestlings), and where data are available, may allow us to explore how these correlate with multi-year cycles of prey driven by natural cycles of available forage and predation, and their relation to climate. 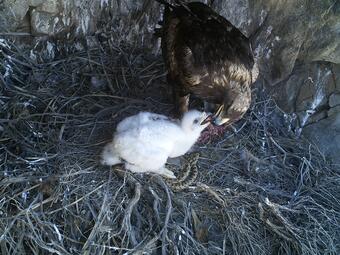 Abundance of prey has been correlated with golden eagle reproductive parameters and with habitat use by non-breeding eagles, such as juveniles, subadults, and floaters. Information about the availability and abundance of prey and those factors (weather, climate, disease, predators) that affect availability and abundance, both spatially and temporally, can provide insight into golden eagle habitat quality and management. Golden eagles are generalists and prey on a number of species of mammals, birds, and reptiles, but black-tailed jackrabbits are the primary prey in many areas of the western U.S. Although there are a number of studies that have examined golden eagle food habits, little or no published information exists for food habits of golden eagles in the Mojave Desert. Additionally, data for spatial and temporal abundance of black-tailed jackrabbits (and other prey species) across the Mojave Desert are scarce, although historic survey data may be available through state wildlife agencies. Jackrabbits are thought to follow 8 to 10 year population cycles considered to be controlled by predation and disease, but little is known about how ENSO events and variability in weather affect predation rates by coyotes and their prey choices in the Mojave Desert. Knowledge about prey and habitat use of golden eagles in this region is critical for understanding how variability in prey availability and/or abundance affects vital rates of golden eagle and ultimately, to assess how potential loss of habitat for foraging due to the proposed SEZs may affect population change in the Mojave Desert.

Digital cameras have been installed near active nests to record food habits and nest success. Also, pellet examination can be used to add to this data. During the spring and winter months visual surveys are conducted to asses prey availability and distribution and to explore spatial patterns of distribution, density and abundance of prey. Collection of other predators can be applied to models to achieve and accurate picture of total habitat of prey species in relation to spatial patterns of abundance across the landscape. This data will help assess food habits, reproductive success and prey availability of nesting golden eagles in the DRECP.  And will inform California’s DRECP conservation strategy within the Mojave Desert by providing information to prevent possible conflicts between the loss of important foraging habitat and siting of proposed alternative energy developments. Results can also inform mitigation efforts by identifying areas of high and/or low prey availability. Data collected on food habits and nest success, and on prey species distribution and abundance will help to construct predictive models of prey availability based on prey dynamics influenced by vegetation, weather, and climate. Which can then be used to develop models linking prey availability/abundance to eagle productivity and survival.

In the California DRECP, Dr. Todd Katzner and his research team have deployed GPS-GSM telemetry transmitters to obtain home range and movement data. Preliminary results from their research suggest that home ranges and core areas of golden eagles in the Mojave Desert, are relatively large compared to other regions in the western U.S., most likely due to lower resource availability. We are collaborating with Dr. Katzner and have deployed GPS-GSM telemetry transmitters on golden eagles in southern Nevada to determine correlates of home range, including size, seasonal use, habitat use and quality, and breeding biology of golden eagles. Telemetry data obtained from this project can also inform research questions (e.g., productivity, dispersal behavior, trends in territory and nest occupancy and causes of eagle mortality) linked to eagle demography of all age classes.  Because eagle trapping is so difficult and expensive, where appropriate, data will be analyzed concordantly, to make sample sizes larger for both studies.

Goals for this program are to:

1) Provide scientific foundation for the conservation of golden eagles and their habitat;

2) Provide tools and techniques for science based management;

3) Identify factors that contribute or limit conservation for golden eagle populations at risk;

4) Initiate an adaptive science approach to support the adaptive management of golden eagles and provide technical assistance to natural resource managers, and; 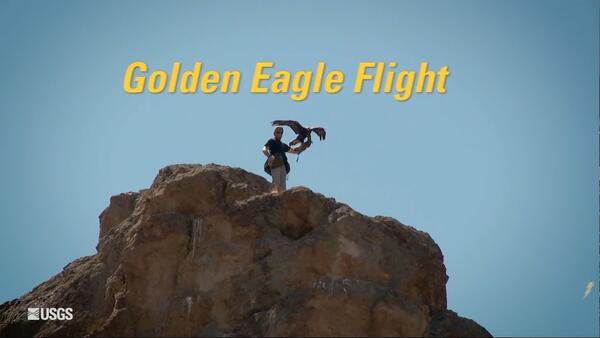 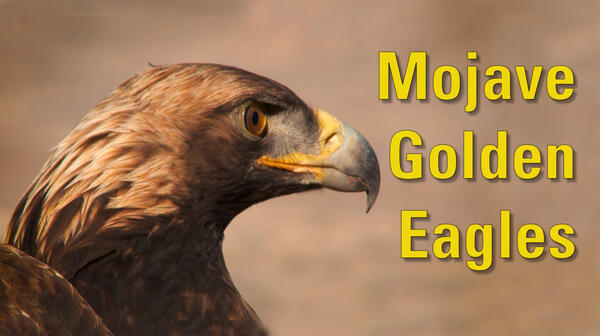