Life on the Edge: Can Corals in Mangroves Provide Insights into Climate Change and Recovery following Severe Hurricane Damage? Active

WARC is collaborating with USGS scientists from the St. Petersburg Coastal and Marine Science Center and other scientists outside USGS to better understand the role of Hurricane Hole as a refuge from changing climate and ocean acidification.

The Science Issue and Relevance:  Climate change is expected to bring stronger and more frequent storms. Hurricanes Irma and Maria hit the U.S. Virgin Islands (USVI) less than two weeks apart in September 2017. Damage was particularly severe in a unique mangrove/coral ecosystem in Hurricane Hole, within the Virgin Islands Coral Reef National Monument, a National Park Service marine protected area, on St. John.  Before the storms, over 30 species of scleractinian (stony) corals were growing on or near red mangrove prop roots in Hurricane Hole, a portion of Virgin Islands Coral Reef National Monument, St. John. This high diversity of corals in the shallow, mangrove-lined bays of Hurricane Hole appeared to be unique within mangrove ecosystems in the Caribbean.

During the 2017 hurricanes, many red mangrove (Rhizophora mangle) trees were uprooted and tossed into the sea, and the prop roots of others were stripped of corals, sponges and other marine life. Although many corals were overturned or buried in rubble, colonies of most of the species, including four that are listed as threatened under the U.S. Endangered Species Act, survived. Recovery of this ecosystem will depend on red mangrove propagules becoming established and producing prop roots to support rich marine life along with a canopy to provide the shade that was critical to the biodiversity present before the storms. Unlike in many situations after disturbances, the substrate that must be restored for full recovery to occur is a living substrate—the prop roots of the mangroves. Larvae of corals and sponges will need to recruit on to the roots. Future storms could hinder this process. The project focus has now shifted to examining ecosystem recovery from these 2017 storms. As of June 2021, little recovery was evident. Red mangrove prop roots that once supported a rich diversity of corals and other sealife are now bare.

Methodology for Addressing the Issue: Previously, USGS scientists from the St. Petersburg Coastal and Marine Science Center and WARC collaborated with partners to better understand the unusual coral/mangrove habitat within Hurricane Hole. They hypothesized that hydrodynamic conditions in Hurricane Hole partially isolate bay waters from open ocean waters, allowing the system to remain out of equilibrium with the open ocean, creating refuge conditions. Whether or not this area is a source of coral larvae to nearby reefs also depends on water mass residence time in refuge bays and transport conditions from bays to open water.

A quantitative assessment of corals and mangroves around the perimeter of Otter Creek, within Hurricane Hole, was conducted before (July 2017) and after (June 2019) the hurricanes.

Future Steps: USGS WARC scientists are working with partners to prepare a manuscript for publication, focused on changes caused by the hurricanes. In addition, USGS scientists will continue to look for indications of the stony coral tissue loss disease that has rapidly spread through Florida and Caribbean reefs, and has now been seen around most of St John but not to date within Hurricane Hole. Dr. Rogers will also be looking for any signs of recovery of mangroves or corals and documenting conditions with underwater video and still photographs. She is also advising on a pilot project involving transplanting of red mangrove seedlings into the Hurricane Hole bays. 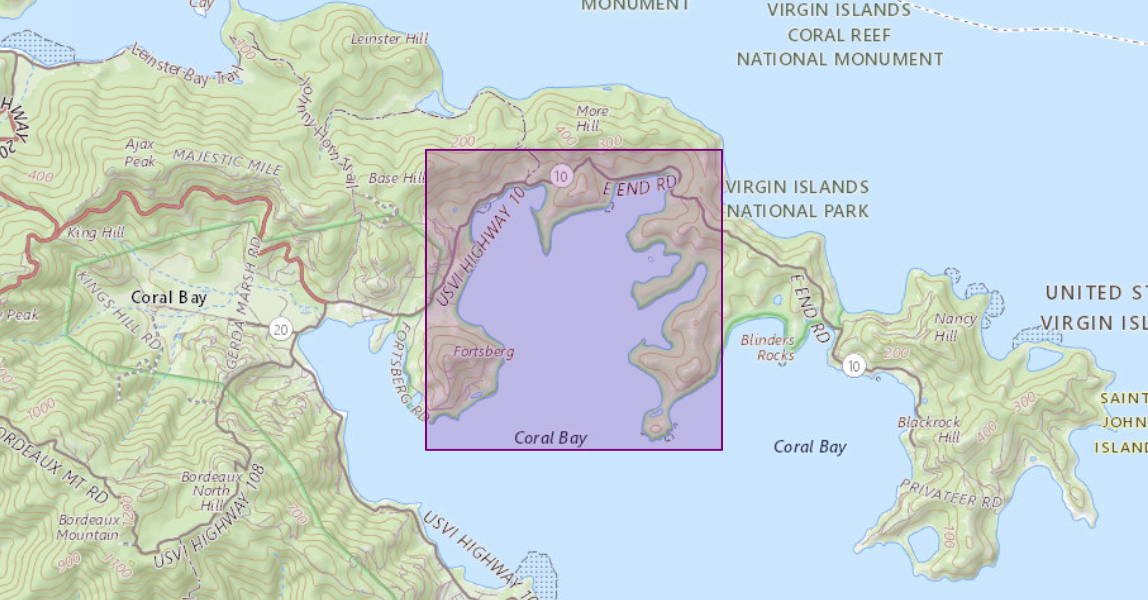 Immediate effects of hurricanes on a diverse coral/mangrove ecosystem in the U.S. Virgin Islands and the potential for recovery

A unique coral community in the mangroves of Hurricane Hole, St. John, US Virgin Islands

Corals do not typically thrive in mangrove environments. However, corals are growing on and near the prop roots of red mangrove trees in Hurricane Hole, an area within the Virgin Islands Coral Reef National Monument under the protection of the US National Park Service in St. John, US Virgin Islands. This review summarizes current knowledge of the remarkable biodiversity of this area. Over 30 scler
By
Ecosystems, Wetland and Aquatic Research Center
November 1, 2014

Risk analyses indicate that more than 90% of the world's reefs will be threatened by climate change and local anthropogenic impacts by the year 2030 under "business-as-usual" climate scenarios. Increasing temperatures and solar radiation cause coral bleaching that has resulted in extensive coral mortality. Increasing carbon dioxide reduces seawater pH, slows coral growth, and may cause loss of ree
By
Ecosystems, Coastal and Marine Hazards and Resources Program, St. Petersburg Coastal and Marine Science Center, Wetland and Aquatic Research Center
July 13, 2012

Life on the edge: corals in mangroves and climate change

Coral diseases have played a major role in the degradation of coral reefs in the Caribbean, including those in the US Virgin Islands (USVI). In 2005, bleaching affected reefs throughout the Caribbean, and was especially severe on USVI reefs. Some corals began to regain their color as water temperatures cooled, but an outbreak of disease (primarily white plague) led to losses of over 60% of the tot
By
Ecosystems, Wetland and Aquatic Research Center

Coral reef expert Caroline Rogers was the only USGS employee in the Virgin Islands when the Category 5 storm hit.