USGS scientists are using a spatially-explicit Bayesian network model to predict the difference between energetic value and energetic demand for stopover habitats for migrating landbirds.

The Science Issue and Relevance: The majority of landbirds breeding in temperate North America migrate through the Gulf of Mexico (GOM) region in spring and autumn. Instead of making one nonstop flight, migratory landbirds typically land at sites along the route (also known as stopover habitat) to rest and forage on fruits, flowers, and invertebrates. In fact, landbirds spend most of migration at stopover sites and the outcome from events during this period can carry-over to influence other phases of the annual cycle (e.g., breeding or non-breeding phases). Stopover habitats in the GOM region are critical for populations of migratory landbirds, yet much has been lost or degraded due to development, land use change, invasive species, natural and anthropogenic disturbances, and other factors. The Gulf Coast Joint Venture (GCJV) focuses on bird habitat conservation along the GOM from Texas to Alabama and is interested in setting population and habitat objectives for landbirds stopping-over in their region. The GCJV has used bio-energetics models to establish habitat objectives for waterfowl and this approach may be applicable to landbirds. This type of model estimates the energetic value of habitat, the energetic demand from birds using the habitat, and identifies areas with an energetic surplus or deficit. This information can be used to set habitat conservation priorities.

Methodology for Addressing the Issue: Does the wooded habitat within the GCJV’s region of interest have sufficient food resources to sustain landbirds during migratory stopover? We will answer this question by using a spatially-explicit Bayesian network model to predict the difference between energetic value and energetic demand for stopover habitats within the Chenier Plain Initiative Area of the GCJV. The energetic value of habitat, represented as total realized energy, will be calculated from field-based measures of food availability and use (see Figure 3 and 4 for specific sites), and lab-based measures of the energetic content of food resources. Bird density as estimated by weather surveillance radar will be combined with published data on the energetic requirements of landbirds to determine total energy demand. Calculating the difference between energy supply and demand will identify habitats that have a food surplus or deficit, and the spatial component of the model will allow the GCJV to target management and conservation efforts within their region.

Future Steps: The developed bioenergetic model will be presented to the GCJV landbird technical working group and eventually the GCJV board for approval. If approved by the GCJV board, the modeling effort will provide a decision support tool for funding habitat initiative projects, determine population objectives for landbird migrants, and identify areas along the northern GOM that lack the resources to support migrant needs during stopover. The concept of the bioenergetic model can be expanded beyond the GOM coast to benefit migrant landbirds across North America. Additionally, the results of the model will be used by other federal and state partners, conservation organizations, and the Gulf of Mexico Avian Monitoring Network to tangibly benefit migratory landbirds. 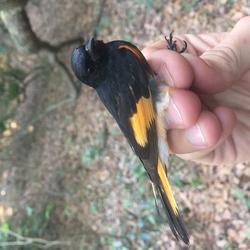 Adapting to Climate Change: Trends and Severe Storm Responses by Migratory Landbirds and Their Habitats

Adapting to Climate Change: Trends and Severe Storm Responses by Migratory Landbirds and Their Habitats