Is this flooding in South Carolina truly a 1000-year flood?

While this certainly was a catastrophic flood with lots of damage and tragic loss of life, USGS provisional data and preliminary analysis show NO indication that a 1000-year flood discharge occurred at any USGS streamgages. However, based on that analysis, it does appear that the USGS streamgage on the Black River at Kingstree, SC and the one on the Smith Branch at Columbia, SC both measured peak floods in the neighborhood of a 500-year flood. Currently, there appear to be a few more streamgages experiencing a 25-year to 50-year flood, but the majority of USGS streamgages had flood peaks that were less than 10-year floods. USGS will have more accurate estimates of the flood probabilities out in the coming months, as the engineers and scientists in South Carolina take time to do more careful analysis of the statistics.

I heard that the river flow through downtown Columbia was 4 times the historic maximum; maybe that was close to the 1000-year flood?

The provisional peak flood flow that USGS measured for the Congaree River in Columbia was 185,000 cubic feet per second (cfs) on Sunday, October 4, 2015. The maximum recorded in history was 364,000 cfs in 1908, which is almost double what was experienced in this current flood.

In the 1930s, though, reservoirs were built in certain parts of the Congaree watershed upstream of Columbia, which makes a flood of 364,000 cfs unlikely. However, even in the 75 years since the construction of those reservoirs (see the peak record here), there have been floods that approach the 2015 flood. For example, in 1964 the peak discharge was 142,000 cfs, and in 1977 the peak discharge was 155,000 cfs.

So, if only the data from last 75 years are considered, this flood is the largest in that period, but not four times the historic maximum.

Why do you think people have been calling it a 1000-year flood?

Although the USGS streamgage data in South Carolina does not seem to indicate a 1000 year flood, the amount of rainfall that fell over a 2 to 3 day period (greater than 16 to 20 inches in some locations) had, according to the National Oceanic and Atmospheric Administration (NOAA), a statistical probability of occurrence of 0.1% or 1 in 1000 chance. So, rather than someone saying this was a 1000-year flood, it is more accurate to say that “statistically speaking”, the rainfall that fell was a 1000-year rain storm, although it did not result in a 1000-year flood.

It comes down to a number of factors, including the pattern of movement of the rain storm in each particular watershed, the conditions of the soil and plant matter on the ground in the watershed, and the timing of rain storm in one watershed versus other watersheds, among other things. An example would be that ground that is saturated before 1 inch of rain fell would result in more water going into the stream that if the ground was dry and could soak up more of the rain. Also, less water will runoff into streams from 1 inch of rain falling in the summer with the trees full of leaves versus the winter when there are no leaves to intercept the rain. This is all the science of hydrology, which is the study of the movement and distribution of water on the earth. Of course, in South Carolina, many of the watersheds have streams that are regulated by dams.

Is this flood due to climate change?

USGS research has shown no linkage between flooding (either increases or decreases) and the increase in greenhouse gases. Essentially, from USGS long-term streamgage data for sites across the country with no regulation or other changes to the watershed that could influence the streamflow, the data shows no systematic increases in flooding through time.

A much bigger impact on flooding, though, is land use change. Without proper mitigation, urbanization of watersheds increases flooding. Moreover, encroachment into the floodplain by homes and businesses leads to greater economic losses and potential loss of life, with more encroachment leading to greater losses.

As more years of data become available, the estimates become more refined, which can result in the quantiles changing. An example in the Southeast United States is the Broad River at Carlton, GA. That watershed had a wet period, with larger annual peak floods, from the late 1800’s to 1920, followed by a drier period since that time (at least in terms of flood peaks). The statistical analysis for the entire period (late 1800s to 2014), which includes the wet years prior to 1920, results in an estimate of a 100-year quantile that is 40 % higher than the one using the data from just 1920-2014.

But it seems like the 100-year flood is getting larger through time at a site near me, so you are saying that this is not necessarily from climate or land-use change?

Climate variability (dry cycles to wet cycles) plays a large role. There is a large amount of uncertainty around the flood quantile estimates (the value of discharge corresponding to the 100-year flood), particularly if there isn’t a long record of observed data at a stream location. For example, if there is only 25 years of data and a statistical analysis was done on that data to estimate the 100-year flood, uncertainty around the estimate would be quite large. It can look like flooding at that particular location is getting worse if there are 2 or 3 floods in a short period that exceed that estimate of the 100-year flood. However, if there were 700 years of data, it might show that what had been called a 100-year flood when there was only 25 years of data was really only a 10-year flood.

I would like to dig a little deeper into the meaning of 100-year flood, can you tell me more?

Instead of me doing that here, let me point you to something on the web that I prepared several years ago on this very subject. I titled it “100-Year Flood—It’s All About Chance”. You can see what I have said by going to http://pubs.usgs.gov/gip/106/.

Below are other science projects associated with this interview. 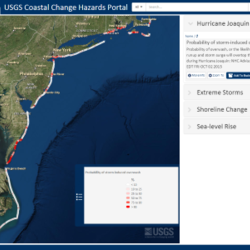 Learn more about USGS flood activities related to the 2015 Appalachian Floods and Hurrican Joaquin. An upper atmospheric low-pressure system over the Southeast combined with moisture from Hurricane Joaquin off the Atlantic coast to create historic rainfall in early October, 2015, across South Carolina.
By
Water Resources
link
February 27, 2019

Learn more about USGS flood activities related to the 2015 Appalachian Floods and Hurrican Joaquin. An upper atmospheric low-pressure system over the Southeast combined with moisture from Hurricane Joaquin off the Atlantic coast to create historic rainfall in early October, 2015, across South Carolina.
Learn More
link 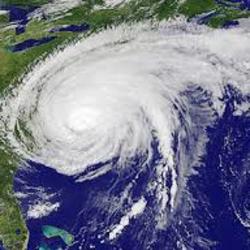 The USGS provides practical, unbiased information about the Nation's rivers and streams that is crucial in mitigating hazards associated with floods. This site provides information about the USGS activities, data, and services provided during regional high-flow events, such as hurricanes or multi-state flooding events. The USGS response to these events is typically managed by the National Flood...
By
Water Resources
link
February 28, 2019

The USGS provides practical, unbiased information about the Nation's rivers and streams that is crucial in mitigating hazards associated with floods. This site provides information about the USGS activities, data, and services provided during regional high-flow events, such as hurricanes or multi-state flooding events. The USGS response to these events is typically managed by the National Flood...
Learn More