This article is part of the Fall 2019 issue of the Earth Science Matters Newsletter.

Historically unprecedented changes in Arctic weather, sea ice, glaciers, and temperature have led to concerns about coastal erosion, ecosystem changes, and sea-level rise. Climate changes in the Arctic are “amplified” in that the cryosphere (glaciers, ice sheets, sea ice), experiences changes that are larger in magnitude than those in lower latitudes. Furthermore, changes in the Arctic affect the rest of the earth. Decreasing summer sea-ice cover in the Arctic Ocean affects weather patterns in heavily populated mid-latitude regions. Melting of Arctic glaciers and of parts of the Greenland Ice Sheet is increasingly recognized as a major contributor to present and future global sea-level rise. Additionally, the resulting increase in fresh water influx to the oceans from this melt has the potential to alter patterns of ocean circulation that affect temperature regimes throughout the globe.

The USGS Climate Research and Development Program (along with other programs within the bureau) conducts Arctic research to better understand the drivers and impacts of change on glaciers, sea ice, permafrost, and hydrology. One of these research projects, Land-Sea Linkages in the Arctic, is investigating the climatic history of the Arctic Ocean and its adjacent seas and land areas using marine sediment cores collected throughout the region. These cores capture sediments deposited up to 500,000 years ago and allow scientists to reconstruct the distribution of sea ice over time scales ranging from the past centuries to millennia and even longer time scales.

Recently, two members of the project, Thomas M. Cronin and Laura Gemery, participated in the Ryder 2019 Expedition of the Swedish icebreaker Oden to northern Greenland to collect sediment cores in a previously unstudied part of the Arctic. The Expedition conducted multidisciplinary research on glacial history of the remote Ryder Glacier, which extends into the ocean from the northern portion of the Greenland Ice Sheet. Research focused on the relationship between the Greenland Ice Sheet, Ryder Glacier, and the ocean during climate changes of the Holocene, which covers the last 10,000 years. Understanding Holocene cryosphere-ocean history is critical as it provides baseline information on pre-Anthropogenic natural variability and sensitivity of the ice sheet to early Holocene warming and its contribution to sea-level changes.

Ryder 2019 took place from August 5 to September 12, 2019 and was led by co-chief scientists Dr. Martin Jakobsson of Stockholm University and Dr. Larry Mayer, Director of the Center for Coastal and Ocean Mapping, University of New Hampshire. The expedition explored remote regions of northwest Greenland including Ryder Glacier, which terminates in the Sherard-Osborn Fjord, the Nares Strait, the Lincoln Sea, and the Petermann Glacier and Fjord. The international team of scientists on the expedition conducted multidisciplinary studies in the fields of atmospheric chemistry and physics, biology, climatology, ecology, genomics, glaciology, oceanography, marine geology, geophysics and geochemistry.

One primary goal of USGS scientists and their Swedish collaborators while onboard was to investigate the dynamics and history of the marine cryosphere, which includes glaciers extending into fjords from the Greenland Ice Sheet and Arctic Ocean sea ice. Greenland ice tongues (floating ice shelves) extend from glaciers on the land into the ocean (Fig. 3). The stability of these features is influenced by both air temperatures, which affect melt rates on the glacier surface, and ocean temperatures, which affect the bottom, submarine portion of the glacier. The potential instability of ice tongues, glaciers, and ice sheets under a warming climate is of concern because of the potential contribution of melting ice to sea-level rise. Decreasing Arctic Ocean sea ice is also a major concern due to its impacts on ecosystems, weather patterns, and ocean circulation.

Research on Oden by Drs. Martin Jakobsson and Larry Mayer involved geophysical mapping of underwater glacial landforms, which was used by USGS scientists to select sites for coring of seafloor sediments deposited during the last 10,000 years. These long-term paleoceanographic records from sediment cores are needed because instrumental records extend back only a few decades and glaciers, sea ice, and climate vary over longer time scales. By combining geologic data from the new cores with instrumental records, USGS researchers and colleagues aim to improve understanding of how the Arctic Ocean and adjacent land masses have been influenced by a range of natural and anthropogenic factors.

While on the ship, USGS scientists began analyzing samples from new cores they collected. They measured the physical properties of the sediments and analyzed calcareous microfossils [foraminifera, ostracodes] that were buried in the sediments. These on-board analyses included using the ecology of the microfossil species in the cores to develop a preliminary reconstruction of sea-ice history to complement previous work elsewhere in the Arctic. In addition, scientists prepared samples for radiocarbon dating and other shell geochemical analyses to be conducted upon return to USGS. The radiocarbon chronology and paleoceanographic reconstructions from the microfauna fossils will provide an unprecedented history of the Ryder Glacier in Northern Greenland.

The Ryder 2019 Expedition allowed USGS scientists to gather much needed data for their project and to collaborate with an array of international scientists that aim to improve understanding of the Arctic and its role in Earth’s climate. This research will help increase our understanding of how Arctic glaciers and ice responded to a warming climate in the past and thus provide insight into how they may respond to similar warming today and into the future.

We gratefully acknowledge the support of the Swedish Polar Research Secretariat, the captain and crew of Oden, Stockholm University and co-chief scientists Drs. Martin Jakobsson and Larry Mayer. Any use of trade, firm, or product names is for descriptive purposes only and does not imply endorsement by the U.S. Government. 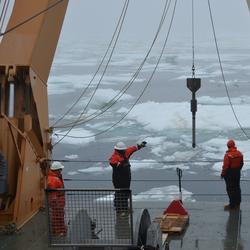 Land-Sea Linkages in the Arctic

The Arctic is undergoing historically unprecedented changes in weather, sea ice, temperature and ecosystems. These changes have led to greater coastal erosion, greater export of freshwater, and changes to marine and terrestrial ecosystems, habitats, and productivity, among other trends. Meanwhile, many believe the Arctic “amplifies” large climate changes during both warm periods and ice ages and...
By
Climate Research and Development Program, Florence Bascom Geoscience Center
link
October 31, 2018

Land-Sea Linkages in the Arctic

The Arctic is undergoing historically unprecedented changes in weather, sea ice, temperature and ecosystems. These changes have led to greater coastal erosion, greater export of freshwater, and changes to marine and terrestrial ecosystems, habitats, and productivity, among other trends. Meanwhile, many believe the Arctic “amplifies” large climate changes during both warm periods and ice ages and...
Learn More