Kyle Douglas-Mankin wants to know where the raindrops go when they fall on the arid and semi-arid landscapes of the Upper Rio Grande Basin.

Are they providing enough water to the farm fields? How much is being re-sprinkled on yards across Las Cruces or El Paso? And just how much rain is really needed for rural developments east of Albuquerque to sprout and grow?

Douglas-Mankin’s job is to help resolve those questions as a supervisory research hydrologist with the U.S. Geological Survey (USGS) on the Upper Rio Grande Basin Focus Area Study. To accomplish that, he has been looking in part to the evapotranspiration (ET) modeling of Gabriel Senay and the Earth Resources Observation and Science (EROS) Center for answers.

Water is crucial to agricultural, municipal, industrial, and recreational users throughout the Upper Rio Grande Basin. And because evaporation from soil and transpiration from plants accounts for the biggest loss of that water, “it becomes really important to understand how much evaporates, when it evaporates, and where it evaporates, so we can better manage what’s left of our surface water for our streamflow and for our groundwater,” Douglas-Mankin said. “Gabriel’s work helps us do that.”

With changes in climate and ongoing drought reducing reservoir water supplies, groundwater has become a crucial component to water availability in the basin. That means an increased use of groundwater by agriculture, towns and cities, and for downriver delivery under the Rio Grande Compact involving Colorado, New Mexico, and Texas. As a result of that increase, groundwater withdrawals now exceed recharge rates in many parts of the Upper Rio Grande Basin, meaning new sources of available groundwater must be identified.

That’s the kind of challenge that was envisioned when Congress enacted the Science and Engineering to Comprehensively Understand and Responsibly Enhance (SECURE) Water Act in March 2009, giving rise to a research program within the USGS called the National Water Census (NWC). Focusing on water availability and use, the NWC was implemented in February 2010 through an initiative within the Department of Interior called WaterSMART (Sustain and Manage America’s Resources for Tomorrow).

A key part of WaterSMART is the focus area studies. One of the first of those studies to be launched was the one involving the Upper Rio Grande Basin. The Rio Grande runs 670 miles from its headwaters in Colorado through New Mexico and northern Mexico to Ft. Quitman, TX. Along its river corridor, it is a primary source of irrigation water for food, fiber, and feed production, and it also supplies municipal water to the cities of Albuquerque, Las Cruces, El Paso, and Ciudad Juarez.

Douglas-Mankin is working to develop a watershed model for the entire upper basin that not only captures water balance throughout the basin at a fairly fine resolution, but also looks at streamflows. He knows that some of the rain that falls will recharge the groundwater, and some will impact streamflows. But what Douglas-Mankin hopes to get from Senay and his ET modeling is a better understanding of how much of the rainfall ends up evaporating or transpiring into the air.

“How much water is left that we can use for whatever we want to use it for?” Douglas-Mankin said. “Maybe that’s drinking water, or for new agricultural development, or for maintaining streamflow for native fish. The data Gabriel provides lets us make sure we’re accounting for … what happens to the water in evapotranspiration so that we have a better chance of estimating what goes to the streams and what goes to the groundwater.”

Senay uses remotely sensed data scaled to Landsat 30-meter resolution and energy-balance principles to model the rates of evaporation and transpiration on fields in the upper basin. Energy balance involves an understanding that plants regulate their tissue temperatures by balancing energy inputs and outputs. As water and nutrients are transported from the soil to the plant’s leaves, ET plays a major role in regulating leaf temperature through evaporative cooling, which balances incoming energy from sunlight and outgoing energy from evaporation.

An important part of Senay’s work then is the knowledge that through expended energy, a fully transpiring vegetated area can appear up to 40 degrees Fahrenheit cooler than bare areas with little evaporation. When used in combination with local weather datasets for irrigated lands, Senay’s model can provide increasingly accurate and repeatable estimates of actual ET—the amount of combined water that either evaporates from the soil and vegetation surfaces, or is transpired by plants.

“In the modeling of moisture allocation, plants are allowed to take precedence first. They take the water; the maximum they can extract from the rootzone” before it eventually seeps into groundwater or makes its way to streams, Senay explained. So understanding how much of that water is used by plants, especially in drier areas where the amount of available precipitation is limited, is at the core of the Operational Simplified Surface Energy Balance (SSEBop) model that Senay employs in his ET work.

“If the landscape is very dry, there is no adequate moisture in the soil, so the plants are thirsty and cannot transpire,” Senay said. “If they don’t transpire, they heat up. So SSEBop is just simply a computer model that converts this temperature signal of the landscape pixel by pixel into the amount of water used by the landscape, mainly vegetation. That’s really what we’re talking about.”

Here are just a few examples of how that information is going to help him, Douglas-Mankin said. Senay’s monthly and seasonal ET maps at Landsat scale will help improve the measurement of water consumption on farm fields, especially those that are irrigated. It will assist in a similar fashion in quantifying water consumption through evaporation and transpiration in wetlands and other riparian ecosystems as well.

Senay’s ET work has an application in urban settings like Albuquerque, NM, as well, Douglas-Mankin said. In particular, using Landsat data back to 1984 can help reveal what impact urbanization has had on water consumption and climate in New Mexico’s largest city.

“When we start paving over things, or we start irrigating lawns, how is that going to affect the climate of the city?” Douglas-Mankin said. “This gives us a new tool to look at that. With Gabriel’s work getting down to finer spatial and temporal resolutions, we can observe smaller lots and objects … from city blocks to back yard garden plots … with a revisit frequency of about a couple weeks.”

As he collects evaporation rates from the ground, Senay can tell where lawns are being irrigated, or where water isn’t evaporating from ground surfaces because they’ve been paved over. Urban heating then can be addressed by planting more trees that transpire to help cool the air and that shade homes, thus reducing air conditioning costs to homeowners and businesses. In fact, in Albuquerque, property owners are already reducing their lawns to save on watering.

Another area of interest in Senay’s work is east of Albuquerque, where rural developments are growing and expanding. As that happens, city and county officials need to know how much water is available to support wells and other water needs in that area.

“One of the first things you need to understand in terms of how much groundwater is going to be able to recharge the subsurface groundwater aquifer … is how much water is lost to evaporation before it makes it too far into the soil,” Douglas-Mankin said. “We’re using Gabriel’s data to help the county understand how much of the rainfall is evaporated, and where this happens within that area.”

Could that information and assistance for all the existing and potential elements of the Upper Rio Grande Basin Focus Area Study be found elsewhere? Certainly, there are a number of research groups that do remote-sensing ET modeling. But Douglas-Mankin insisted that being able to tap into another USGS scientist already established in the ET field made the most sense for him. It certainly saved him from having to develop the ET data himself.

“I’ve been with the USGS now for a little over two years,” Douglas-Mankin said. “Almost as soon as I got here, I got started with these projects. A couple of them, we were using the SSEBop data, and I found out fairly quickly that Gabriel was the USGS guy doing these data. We’ve been able to work together ever since. So, for me, for this project, it just made sense. It really has worked out very well.” 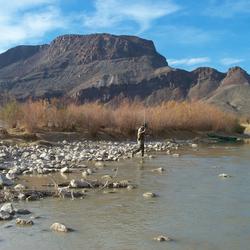 USGS is undertaking a 3-year study of water use, availability, and change in the Upper Rio Grande Basin in one of several national “Focus Area Studies” in the Department of Interior’s WaterSMART initiative. The Upper Rio Grande study area runs 670 miles from its headwaters in Colorado through New Mexico and northern Mexico to Ft. Quitman, Texas. Along its river corridor, it is a primary source of...
By
Oklahoma-Texas Water Science Center
link
May 29, 2018

USGS is undertaking a 3-year study of water use, availability, and change in the Upper Rio Grande Basin in one of several national “Focus Area Studies” in the Department of Interior’s WaterSMART initiative. The Upper Rio Grande study area runs 670 miles from its headwaters in Colorado through New Mexico and northern Mexico to Ft. Quitman, Texas. Along its river corridor, it is a primary source of...
Learn More
link 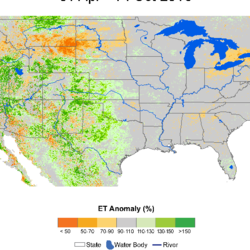 The USGS EROS approach to ET estimation allows the quantification of ET at two important scales: (1) field and (2) hydrologic basin. Field-scale ET is used for water use estimation to understand and quantify where, by whom, and how much water is being used in the landscape. On the other hand, basin-scale ET assists in understanding basin water balance and water availability.
link
November 1, 2016

The USGS EROS approach to ET estimation allows the quantification of ET at two important scales: (1) field and (2) hydrologic basin. Field-scale ET is used for water use estimation to understand and quantify where, by whom, and how much water is being used in the landscape. On the other hand, basin-scale ET assists in understanding basin water balance and water availability.
Learn More