The EROS Center could very well end up playing several significant roles in dealing with the monstrous hurricane called Florence now barreling down on the Carolinas and American’s Eastern Seaboard.

The International Charter on Space and Major Disasters was activated on Sept. 11 in response to Florence. That means Federal, state, and local agencies will be able to access images from Landsat and other remote-sensing systems through the Hazard Data Distribution System(link is external)(HDDS) housed at EROS.

That data, and the maps and images produced from them, will be valuable to organizations like the Federal Emergency Management Agency (FEMA) as it identifies roads and infrastructure under water and unavailable for rescue efforts after Hurricane Florence makes landfall.

A second EROS project with potential to play a role with Florence is the Coastal National Elevation Database, an initiative where topography (land elevation) and near-shore bathymetry (water depth) datasets are integrated into what are called Topobathymetric Digital Elevation Models, or TBDEMs. Those coastal elevation models are often used by government agencies to project the impacts of flood inundation from sea level rise and storm surges. As it turns out, CoNED has produced a TBDEM of the Outer Banks and Pamlico Sound in North Carolina, which at one point lay right in the path of Hurricane Florence.

“The CoNED TBDEMs have been used extensively for storm surge modeling in other areas, so we could guess that somebody might be doing that (with Florence),” Dean Gesch, a research physical scientist at EROS, said, though he didn’t have direct evidence of that at this point.

Accurate elevation datasets are crucial for projecting where and how massive amounts of Florence’s storm surges will propagate onto the land surface, and the flooding that will occur afterward. Knowing those projections ahead of the hurricane’s impacts is critical for evacuation efforts, Gesch said.

“You get these maps generated from the storm surge model itself that says, ‘OK, this is the projected area that’s going to be inundated at these depths, and it’s going to potentially endure for ‘X’ amount of time,’ ” Gesch said. “So then it’s like, ‘Yeah, you’ve got to get people out of these areas.’ ”

Though the National Weather Service had downgraded Florence from a Category 4 storm to a still dangerous Category 2 hurricane by late Wednesday, forecasters were still predicting storm surges as high as 13 feet. Parts of North Carolina are forecast to see maximum sustained winds of up to 110 miles per hour and to receive as much as 40 inches of rain, which could lead to historic flooding.

Past Storm Inputs Can Help with Future Projections

Gesch said post-storm modelers will look at maps produced by the USGS Water Mission Area of the extent and magnitude of past hurricane storm surges and use those to calibrate or improve their models for future storms like Florence. Then based on input conditions of those past storms, such as the strength of those hurricanes, their direction, where they made landfall, and atmospheric conditions, “they’ll take that and apply that to a TBDEM and come out with a projection of where that (current) storm surge (with Florence) should fall,” he said.

The National Oceanic and Atmospheric Administration (NOAA) puts out storm surge projections under a program it calls Sea, Lake, and Overland Surges from Hurricanes (SLOSH).(link is external) Gesch calls it “a very tried and true, very well used storm surge model.” It’s a model that uses topographic and bathymetric data, Gesch said, adding, “I don’t know for certain, but I would be surprised if it doesn’t use our DEMs in some cases.”

With SLOSH, NOAA can project where and how various categories of storms will likely cause inundation, and to what levels. “So as the category of storm changes, and the corresponding storm surge changes, it shows that. Then it’s like, ‘OK, these areas have to be evacuated in a Category 1 storm. These in a Category 2. These in a 3, and so forth,” Gesch said.

FEMA Will Have Interest in Elevation Datasets

FEMA could end up using the CoNED TBDEMs and DEMs after Florence as it does its damage assessments, Gesch said. And not just because of potential storm surges, but because of the prediction that up to 40 inches of rain could fall as Florence stalls over land.

USGS has been installing 160 storm-tide sensors along the coasts of North Carolina and South Carolina to measure the depth and duration of inundation events with Florence. Those are point measurements, and they can be interpolated into a measurement of how much additional water ends up on the land’s surface, Gesch said.

Digital Elevation Models that are well done, such as the CoNED models, will capture where water from that heavy rain precipitation will flow. That means by using those DEMs, officials can project where flooding will occur even in areas that are not affected by storm surge.

“If they are in a flood plain along one of the major rivers flowing into, say, the Pamlico or Albermarle sounds in North Carolina, the DEM will show you the areas most prone to flooding,” Gesch said. 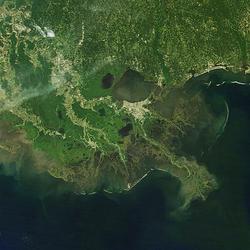 The importance of sea-level rise in shaping coastal landscapes is well recognized within the earth science community, but as with many natural hazards, communicating the risks associated with sea-level rise remains a challenge.
Learn More