Critical Minerals in the EEZ

For centuries, people have crossed oceans in search of valuable minerals. In recent times, though, increasing attention has been paid to the oceans themselves for their mineral potential, especially rock formations on the seafloor.

As part of the President’s 2018 Executive Order on critical minerals, marine mineral information is key to helping the federal government understand its potential mineral wealth; helping industry determine which regions and deposits might be worth exploring; and helping stakeholders understand the effects of mining on the marine environment.

“The ocean seafloor really is one of the frontier areas of mineral resource science,” she explains. “We know a lot about how minerals form and where deposits occur on land, and even in the nearshore areas, but out in the deep ocean, there are huge areas that are completely unsampled, so we can only hypothesize about what is there.”

Currently, there is no large-scale mining of marine mineral resources anywhere in the world. However, a number of countries and companies are actively pushing forward with studies of resource potential, economic and environmental requirements for resource development, and pilot projects to evaluate deep-sea mining technologies.

The USGS has been investigating marine mineral potential since the 1970s, focusing primarily on the U.S. Exclusive Economic Zone, or EEZ. This region extends 200 miles from a country’s shoreline and gives the country control over the exploration and exploitation of marine resources in that area.

"The minerals that the USGS has studied have fluctuated throughout the years, but in 2018, as part of President Trump's Federal Strategy on Critical Minerals, the Department of the Interior published a list of 35 mineral commodities deemed critical to the economy and security of the United States. That list and strategy have given focus to which mineral resources the USGS will prioritize in its marine research and its partnerships with agencies like the Bureau of Ocean Energy Management and National Oceanic and Atmospheric Administration."

Understanding how minerals form has always been a priority for the USGS, because that process is foundational both for locating resources that can be produced as well as anticipating what potential effects extracting them can have on the nearby environment.

“Marine minerals are unique because they precipitate slowly from seawater over millions of years,” Gartman observed. “That gives ocean chemistry, and the minerals’ environmental context, a huge role in determining how these minerals form.”

Deep on the ocean floor, iron and manganese gather to form metallic crusts on rocks and sediments. The crusts grow slowly, taking up to millions of years to form millimeters of crust. However, these crusts also act like a deep-sea sponge for elements dissolved in the saltwater. That makes them an attractive potential source for valuable and critical commodities like cobalt, manganese, rare earth elements, and tellurium.

In addition to making crusts on rocks, in some deep, quiet environments manganese and iron will accumulate in metal-rich masses scattered across the seafloor. Just like a pearl, these nodules start with something tiny at the center, such as small rocks, fragments of older nodules and even shark teeth.

Like the ferromanganese crusts, these nodules can pull other elements out of the saltwater and are known to contain critical commodities like nickel, copper, cobalt, lithium, and, of course, manganese.

Marine Phosphorites: Fertilizer from the Depths

Occurring alongside ferromanganese crusts near the margins of continents, marine phosphorites are deposits of phosphate rock. Phosphate is a key fertilizer as well as a source for phosphoric acid which is important to the food and beverage industry. Marine phosphorites have an extra benefit-- they concentrate fluorine, which is important to refrigeration, as well as heavy rare earth elements.

Seafloor Massive Sulfides are mineral-laden mounds and chimneys that form when hot water from beneath the ocean floor escapes and mixes with cold seawater. The hot water travels through various rock layers and pulls elements like copper, zinc, iron, gold and silver along with it, so when it cools, these elements become concentrated in the mounds and chimneys. These sulfides are most common near tectonic plate boundaries like the mid-ocean ridge that runs along the Atlantic Ocean’s seafloor.

“A fascinating thing about these systems,” said Gartman, “is unlike their ancient analogues on land, you can actually watch these vents as they are building. The focus of our research is to understand how long it takes them to form, the process by which they concentrate metals or lose them to the ocean basin, and what happens when they eventually collapse and get buried.”

Much like on land, marine geologic formations do not respect international boundaries, so the USGS has partnered with other agencies and international organizations to learn lessons that can be applied to domestic resources.

“For instance, in 2017 our team published a study that showed the ferromanganese crusts of the Arctic Ocean seafloor were unusually high in the rare earth element scandium,” said Gartman. “Even though many of our samples come from outside the U.S. EEZ, we can take the information we gathered and use it to better understand our own Arctic EEZ.”

The USGS partners with agencies like the Bureau of Ocean Energy Management and the National Oceanic and Atmospheric Administration, as well as academic institutions to better leverage resources.

Upcoming research for the USGS Global Ocean Mineral Resources Project includes a joint research cruise to the Escanaba Trough of Gorda Ridge, a seafloor formation off the coasts of Oregon and California. Escanaba Trough is home to seafloor massive sulfides that may contain high grades of gold, silver, copper and zinc, as well as lesser amounts of metals such as antimony, bismuth, lead, cobalt and tin.

For the USGS, it’s a bit like a homecoming.

“The program did quite a bit of offshore research in that area in the 1980s, anticipating that there would eventually be interest in its mineral resources,” Gartman explains. “A lot of what we learned there has guided further research and now it’s time for us to go back and apply what we have learned in the decades since.”

The marine mineral data that Gartman and her USGS and external collaborators will collect in Escanaba Trough, much like that from the Arctic Ocean and other locations, will contribute to a better understanding of the United States’ critical mineral wealth. The USGS will continue to investigate the origins and distribution of marine minerals to form a strong foundation of knowledge about these potentially valuable resources. 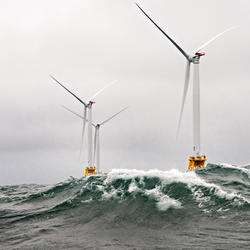 Along the U.S. west coast, the Pacific Ocean, ocean floor, and winds above contain potentially vast energy and mineral resources. Developing these resources safely and wisely requires detailed information for each area of interest. One goal of EXPRESS is to inform ocean energy and mineral resource decisions.
By
Coastal and Marine Hazards and Resources Program, Pacific Coastal and Marine Science Center
link
August 23, 2021

This Research Opportunity will be filled depending on the availability of funds. All application materials must be submitted through USAJobs by 11:59 pm, US Eastern Standard Time, on the closing date.

This Research Opportunity will be filled depending on the availability of funds. All application materials must be submitted through USAJobs by 11:59 pm, US Eastern Standard Time, on the closing date.

Ferromanganese crust samples were collected via dredge during four oceanographic research cruises to the western equatorial Pacific Ocean. The location (latitude, longitude, depth) and concentrations of 27 major and trace elements in the most recent growth layers of ferromanganese crusts from 57 dredge sites are presented here, as well as select seawater chemistry at each location. These data were
By
Coastal and Marine Hazards and Resources Program, Pacific Coastal and Marine Science Center