Between January 14-15, 2022, volcanic explosions destroyed much of Hunga Tonga-Hunga Ha'apai, an uninhabited island in the Tonga archipelago in the southern Pacific Ocean. A plume of ash rising 36 miles into the atmosphere blanketed the neighboring Tongan islands.

The eruption also displaced an enormous volume of water, creating waves that reached as high as 65 feet above sea level on nearby inhabited islands, causing loss of life and major damage.

Not since the 1883 eruption of the Indonesian volcano Krakatoa have scientists had the opportunity to study, in real time, an event so large that it literally sent shock waves across the globe. Since the beginning of the Hunga Tonga-Hunga Ha'apai eruption on January 14, 2022, scientists worldwide, including many at the U.S. Geological Survey, recorded and researched the effects of the powerful and deadly volcanic event.

Felt and seen around the world

The eruption and tsunami were immediate hazards to the island nation of Tonga, but their effects were felt on a much larger scale, unleashing sound and pressure waves detected around the world.

The event generated a large acoustic-gravity wave, known as a Lamb wave, that traveled around the Earth four times, creating sounds heard in Alaska, 6,200 miles away. Scientists analyzed data recorded from a variety of ground-based and spaceborne sensors across the globe to investigate this event.

The tsunami spread from the volcano and traveled across the Pacific Ocean at the speed of an airliner—approximately 450 miles per hour, typical of ocean-spanning tsunamis.  A tsunami advisory was issued across much of the Pacific Rim: for parts of New Zealand, Japan, and South America to coastal British Columbia and parts of Alaska, California, Hawaii, Oregon, and Washington.

A pressure wave released by the eruption traveled even faster—about 700 miles per hour— raising smaller tsunamis in bodies of water as far away as the Caribbean and Mediterranean seas. Where the pressure wave passed the deep water at trenches it moved water at about the same speed as it travelled creating a larger tsunami by an effect known as Proudman resonance.

“Volcanic tsunamis are interesting because there are several different mechanisms that can cause a tsunami, including caldera collapse, flank failure, pyroclastic flow, fast-moving atmospheric waves, and volcanic earthquakes or explosions,” said Eric Geist, a USGS research geophysicist. “Most of the tsunamis in recorded history—about 70 to 80 percent—are generated by earthquakes.”

The collective research by scientists from this worldwide event will lead to a better understanding of the hazards posed by volcanos and tsunamis. Using oceanographic and meteorological data, post-event field survey observations, and hydrodynamic modeling, researchers continue to piece together this complex event. Several journal articles with USGS authorship have already been published, including ones in Science and Nature.

“An event of this type last occurred 139 years ago, during the eruption of Krakatoa,” said Bruce Jaffe, a USGS Research Oceanographer who studied the event. “These are the first observations of a tsunami from a large, emergent volcanic eruption ever captured with modern instrumentation.”

“Not only was this event a good opportunity to practice a post-tsunami survey in our backyard, but it also provided scientists who model how tsunamis form and impact coastlines a way to validate those models,” said SeanPaul La Selle, a USGS geologist who led one of the research teams.

Planning for the next tsunami

“We at the USGS and our partners can provide information on how big the waves are going to be, and how fast the currents will be, so coastal communities know what to plan for,” said Stephanie Ross, USGS Tsunami Scenario Coordinator. “With distant events such as the recent Tonga eruption, there's some time to act before the waves arrive on our coast, but not a lot of time to plan. So, the more planning coastal communities have done ahead of time, the better off they are to have plans in place and be able to respond.”

The USGS helps communities by mobilizing staff to collect data and then produce both a snapshot and an elevation model of the coastal change after a tsunami reaches our coasts. This contributes actionable information for communities to use.

“Organizing and executing these quick responses improves our capability to do the next one,” said Andy Ritchie, USGS Geologist. “This event is consistent with the USGS’s mission of regular monitoring on the coast, as well as being good practice for responding to larger-scale events.”

An analogy to sea level rise

The tsunami made landfall on the continental U.S. Pacific coast on January 15, 2022, bringing with it multiple damaging ocean waves. The waves, between 3 to 4 feet high, caused infrastructure damage and prompted officials to close beaches and harbors due to dangerous surf and currents.

Near a USGS office in Santa Cruz, California, the tsunami’s arrival coincided with high tide, with waves pushing water levels in Santa Cruz Harbor about 7 feet above the high tide that day of 6.7 feet. USGS tsunami researchers rushed to the harbor afterwards to collect elevation data and map the high-water extent.

Rather than forming distinct, crashing waves in the harbor, the water rose steadily and evenly—“almost like sped-up sea-level rise,” said Amy Foxgrover, a USGS Geographer.  At the tsunami’s peak, the extent of inundation in Santa Cruz Harbor mimicked scenarios of future sea-level rise projected by the USGS Coastal Storm Modeling System.

“We can use the type of information collected in Santa Cruz Harbor on how far the water reached and compare it with the coastal storm and sea-level rise models we've already developed for the West Coast of California,” said Foxgrover. 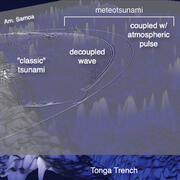 In depth: Surprising tsunamis caused by explosive eruption in Tonga

A volcanic eruption in Tonga on 15 January 2022 surprised scientists by triggering two types of tsunamis: “classic” tsunamis caused by the displacement of large volumes of water, and meteotsunamis caused by fast-moving pressure disturbances in the atmosphere.