Hardware began arriving at EROS in mid-November for the backup center, which will play an integral role in the operations of Landsat 9—scheduled for launch in September 2021—and with a storied Landsat program that has helped humankind study Earth for almost 50 years now.

The terminals, racks, servers, firewalls, and security equipment comprising the backup center located at EROS will ultimately help to ensure important mission operations and safety. A Mission Operations Center (MOC)—like the primary LMOC at NASA’s Goddard Space Flight Center in Greenbelt, MD, or the backup center at EROS—is where a Flight Operations Team (FOT) decides on a daily basis which set of scenes to collect while commanding and controlling the satellite. It also monitors the health and status of the satellite and its ground system.

Flight operators control the maneuvers of the satellite so it stays in the correct orbit and can nimbly dodge space junk. They handle troubleshooting when there are spacecraft and instrument anomalies. They also tell the instruments what parts of the Earth to image day and night. Basically, the success and durability of the mission depends on the role of the LMOC and the FOT.

Landsat Engineering and Development Manager Brian Sauer said he’s not aware of that kind of space flight operations capability anywhere else in South Dakota. “I think it’s pretty cool,” Sauer said. “It’s only a backup capability, but still, it’s a capability. That’s a big deal for us.”

NASA develops, builds, and launches the spacecraft and instruments aboard it. The USGS develops and builds the ground system to acquire, process, and archive data, and then is in charge of mission operations. As far as flight operations are concerned, the primary and backup LMOC will be used initially to operate Landsat 9. Sometime after Landsat 9 is launched in September 2021 and later commissioned, the operations of the 8-year-old Landsat 8 satellite will be added to LMOC operations as well.

For the first time in Landsat’s history, EROS was chosen for the backup operations center because the Center is one of the Department of Interior’s primary data centers and now has the necessary power infrastructure and networks necessary to ensure redundancy in the operations of the high-valued Landsat satellites.

Network connectivity between Maryland and EROS now enables high-speed replication across the two mission operation centers, Sauer said.  In addition, the bLMOC will be closely connected to the ground station at EROS—one of Landsat’s five primary satellite ground stations. And, because the Landsat Mission Operations Project is managed from EROS, hosting emergency backup operations at the Center makes sense, Sauer said.

Where the bLMOC becomes vitally important is in emergency situations, when the LMOC at Goddard is unable to handle the operations of the Landsat satellites for whatever reason, Sauer said. In that case, the bLMOC at EROS would be used—either remotely, or with staff actually at the Center—to send commands to or receive data and telemetry from the satellites.

The backup is also periodically used to ensure readiness, and when maintenance is required at the primary facility. When operations are running smoothly at Goddard after the launch of Landsat 9, the bLMOC at EROS should remain relatively quiet.

Sauer said there has been an initial discussion about using the bLMOC at EROS as a launch support room when Landsat 9 blasts into space. That would allow a few select people at the Center to listen to launch operations of Landsat 9 in near real time as the launch takes place.

Despite the delay of Landsat 9’s launch until Sept. 16, 2021, by NASA, Sauer said the status of the spacecraft and instruments being assembled by Northrup Grumman “is in a very positive spot right now.” Electromagnetic Interference Testing is complete. They are now moving on to additional environmental tests, including vibration and acoustics testing. And there will be thermal vacuum assessments as well, testing how well Landsat 9 holds up as it goes through extreme heat and cold.

“Really, our confidence level in this system being ready to ship goes up significantly once we get past thermal vac testing,” Sauer said. “There’s a launch window that we have for us getting to that pad, and we’re on plan to be there for the September launch readiness date.”

That includes the ground system that USGS and EROS has developed and are building. “We’re in good shape on the ground,” Sauer said. “We are definitely getting there.” 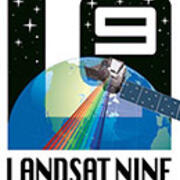