County offices list ownership details and building permits, showing the dates of additions, fences and the like. If the house is old enough, local historical societies may even have archived photographs of the home’s exterior at various points in time.

Documents like those can be used to piece together how a home has changed and when, but certain details are lost to time. When was the bathroom tiling replaced? The carpet? When did the home get its green paint job?

Imagine if, instead of disparate records marked by distinct and distant points in time, a homeowner could travel through time to see their home as it appeared for each of the last 32 years. What if they had a way to not only know the year the paint appeared, but to know approximately when it was applied within the year?

With that information at their disposal, how might a homeowner plan their next renovation or maintenance project? What might they learn about the stability or vulnerability of their foundation, about the impact of the elements on their property and how well previous renovations held up against them?

In a sense, that kind of year-to-year detail is what the USGS Earth Resources Observation and Science (EROS) Center’s Land Change Assessment, Monitoring, and Projection (LCMAP) initiative promises to offer. Not for homes, of course, but for the land: A virtual time machine that sorts each 30-meter plot of ground in the United States into land cover classes for every year from 1985 through the present, as well as identifying what’s changed and when.

To highlight LCMAP’s capabilities, LCMAP has produced a "Story of Change" to show how the products captured damage from a series of tornadoes in the spring of 2011.

The recent releases represent the public’s first opportunity to see the results from the yearslong collaborative effort, led by an LCMAP research team and supported by partners at Boson University and the University of Connecticut.

Change, captured in near real time

The notion of reaching into history with satellite data isn’t novel, of course. The USGS Landsat series of satellites, the world’s longest continuously-collected record of moderate resolution land surface imagery, have long offered the capability of looking backward in time for the entire earth.

But using that data to map land cover on a wide scale has always been a more complex endeavor. Snapshots in time have formed the backbone of land cover and land use mapping at the USGS for decades, and detailed datasets like the National Land Cover Database remain important tools for remote sensing studies.

But LCMAP digs deeper, leveraging every cloud-free Landsat observation to create a land cover record of unparalleled temporal depth. Instead of then and now, LCMAP is then, now, and hopefully much of everything in between and will even project into the future.

The foundation of LCMAP are 10 datasets - five for land cover and five for spectral change – created using Landsat Analysis Ready Data (ARD) and a modified version of the Continuous Change Detection and Classification (CCDC) algorithm.

Among the products are Change Day and Change Magnitude. Those products identify the approximate day of the year on which a change occurred and the intensity of that change, as indicated by spectral signal shifts captured by the satellite sensor. Changes are tracked at the pixel level, with each pixel representing an area about the size of a baseball infield.

The concept of sifting through change within individual years across a multi-decade dataset represents a seismic shift from the expectations embedded within previous wide-scale mapping efforts. Instead of comparing one date to another, the CCDC algorithm looks between dates and does the work of change detection automatically.

Landcover, Change Day and Change Magnitude products can all signal the impact of natural or man-made disasters, such as the tornadoes that tore through the Tuscaloosa, Alabama area in April of 2011. Purple streaks thread through the Landcover Change product, which correspond to the paths of the tornadoes, one of which was an EF5 with a width of 1.5 miles.

There are caveats to the Change Day product – it doesn’t purport to capture the exact day of change, for example, but rather to approximate it with uncertainties. Between two Landsat satellites, new imagery is gathered every eight days and estimates are made from those observations.

The LCMAP Change Day product was able to tag the spectral change for the Tuscaloosa tornadoes to a day in early May, aligning closely with the actual day of impact on April 27, 2011.

The Change Magnitude product also had the streaks, in varying shades of blue, purple, and pink that marked the intensity of change.

Timothy Larson, a contractor at EROS on the LCMAP production team, sought out the Tuscaloosa data to see how well the three products would capture a known event. The purple streaks are a sign that LCMAP can indeed do what it’s intended to do: Capture change as it happens and document it as part of a historical land cover record.

With LCMAP, the land cover impact of many of the most serious hurricanes, fires, tornadoes or hail storms since 1985 can be captured by shifting spectral signatures recorded by the sensors onboard Landsat, documented, classified, and made available for study.

Larson is currently working through the datasets and plans to pull out examples from hurricanes for future change stories.

“There have been so many hurricanes,” Larson said. “We could look at every one of them.”

The imagery from the Alabama tornadoes is compelling, but such examples don’t tell the full story of LCMAP’s value as a research tool. Tornadoes and other high-impact disasters are an obvious place to look for change, but impacted areas already tend to draw plenty of attention both in and outside of the scientific community.

Just as major home renovations require building permits and associated documentation, disaster events mark points in time for study and follow-up. LCMAP data can certainly contribute to the conversation, but such conversations are already flush with data points.

A real promise of LCMAP emerges in part through its ability to offer detail and insight through both the capture of long-term trends and the notation of subtle changes that are missing from the current land use products because they are only compiled once every several years.

Roger Auch, a research geographer on the LCMAP team, points to carbon accounting as a place where annual disturbances to vegetation is important to building quality models. If a hailstorm or drought does damage to crops, the amount of carbon captured is reduced during that growing season.

A spectral change captured by satellite data within that year, at 30-meter pixel resolution, Auch said, could show a subtle but meaningful difference.

“We have some stakeholders that want at least annual-based disturbances - they want to know how much carbon is lost,” Auch said. “Maybe it's still a carbon sink, but it's less of a carbon sink than it would have been if it hadn't been disturbed. I do think this allows us to find things that are a little bit more ephemeral.”

The Change Day and Change Magnitude products could also capture complexities in land change patterns. Forest losses caught by spectral shifts in reflectance could be a sign of planned logging or farmland conversions, but they could also be responses to other types of change on the landscape, Auch said.

A tornado that tears through acres of forest could leave some trees standing and others too damaged to recover. A pine beetle infestation could put large swaths of forest at risk. In scenarios like those, a loss of forest could be evidence of logging performed to spare usable timber or protect fire-vulnerable areas.

If LCMAP captures a slight change to forested land that aligns closely with a hurricane making landfall, then marks a shift six months later large enough to switch that land’s classification from tree cover to barren, Auch said, “that clear cut may not have come from saying 'hey, it's time to cut down the trees.' It may come from a salvage operation.”

Examples like this show the power of harnessing continuous data. Without this dense record, the context can be easily lost.

The details within LCMAP’s temporally-dense datasets can act as a jumping-off point for a wide range of inquiry. With insight on how and when land change has occurred in the past, how land managers have responded, and how those responses played out over time, what steps might they take in the future?

Exploring such questions through the lens of LCMAP data is at the heart of the initiative. As LCMAP Lead Jesslyn Brown explained to attendees of a November workshop at EROS, the ultimate goal is to give researchers, land managers and decision makers information that brings clarity to the study and management of the Nation’s land resources.

The data – representing the “M” in LCMAP – will inform land cover assessments and projections, as well as the research and development of innovative tools for the use of that data and of applications to meet the specific needs of stakeholders.

“Our work will contribute to understanding how past, present and future land change affects society and natural systems,” Brown said. “It’s not just about creating the land change data. That’s really the first step – and it’s been a pretty big step – but once we have that data, what do we do with it?” 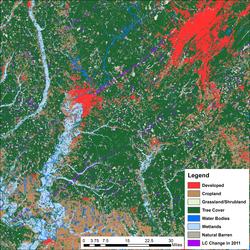 The USGS Land Change Monitoring, Assessment, and Projection initiative aims to identify where the landscape is changing and why.
By
Earth Resources Observation and Science (EROS) Center
link
April 5, 2019

The USGS Land Change Monitoring, Assessment, and Projection initiative aims to identify where the landscape is changing and why.
Learn More