The next full moon will come on September 2, 2020. And when you look up to see it, so will Landsat 8. As probably the most accurate Earth imaging satellite system, Landsat has multiple ways of calibrating data to ensure its accuracy and interoperability with other satellites. One of the strategies the calibration engineers use is lunar calibration.

In a recent Eyes on Earth podcast, Cody Anderson, Project Manager for the EROS Cal/Val Center of Excellence (ECCOE), discussed Landsat calibration, especially the once-a-month maneuver Landsat 8 has employed since it launched over 7 years ago.

Here are a few highlights from that conversation.

This super accurate record of earth imaging spans nearly 50 years and it’s global imagery. What is one of the main strategies that keeps Landsat data so accurate?

We look at all the old Landsats and we compare them to the newer ones. We do this kind of large cross calibration approach where we are looking at the best data we have from the newest Landsats. Landsat 8, which is our most recent one, has seven onboard calibrators, multiple lamps, solar diffusers, shutters, onboard black bodies. And then we use multiple vicarious techniques called Pseudo Invariant Calibration Sites, global land surveys for the geometric reference. We have been sending field teams out for many years with handheld spectrometers making measurements. Then we flow the data from the newer satellites all the way back to the older ones, so it’s really a continuous dataset from the first Landsat up to Landsat 8 and then the future Landsats that we are planning.

You mentioned a lot of methods of calibration. One term you used was Pseudo Invariant Calibration Sites. Landsat looks at different sites across the earth that are very stable, very dry locations, right?

Yes. Our favorite one is called Libya-4. It is out in the Libyan desert. Every time a Landsat satellite passed over that site, we would acquire an image. This is even back in the ‘80s and early ‘90s where we could not get all the data at EROS. We were limited on the number of acquisitions that we could take due to the onboard memory of the actual satellite. This is where the International Cooperator agreements came into place where we were actually downloading Landsat data to multiple other countries and institutions throughout the world. Most of the time that data would not actually come back to EROS. The data we always made sure to get was Libya-4. I am sure some time in the future people will be looking back at Landsat collections and realize that, “What was happening over this Libyan desert that we have 10 times more images of this Libyan desert than anywhere else in the world?” Well, it’s our favorite PICS site. That’s the reason.

At some point though, somebody probably said, “Hey, I know a place that doesn’t change. Has no vegetation, it doesn’t even have any atmosphere. Maybe we should image the moon.” How did that even come up?

The moon is a great one. No atmosphere is very key there. The surface doesn’t change. People have been looking at it for centuries. Lunar calibration really got started with what is called the ROLO Project, or the Robotic Lunar Observatory, which is down at USGS Flagstaff, Arizona. That started from a NASA grant back in 1995. The entire mission of that was to record many, many images of the moon, model out the moon’s response throughout the whole waxing and waning phases, the different crescent moons and the full moons. The moon doesn’t change, the surface. But the orbit of it, it wobbles a bit. They call it librations, where you are seeing different parts of the moon. There is actually a pretty involved model behind the lunar response.

Is Landsat 8 the first Landsat to do moon imaging?

So, Landsat 8 turns to look at the full moon once a month. Does it also howl and grow hair and big teeth and claws?

I don’t know that it is quite a werewolf, but I do know that the entire maneuver that we need to do in order to rotate the satellite to acquire an image does make the flight ops team irritable every now and again. Maybe they are wolves about once a month getting upset with us.

What is exactly involved when Landsat 8 does this turn to look at the moon?

It is not too difficult. It’s pretty easy. There is about a 70-page document and a couple of 10+ term equations that the NASA Jet Propulsion Laboratory puts out. Automatically, you run these equations and it cranks out the position of the moon. It’s really not that difficult. Just a couple long equations.

Just a couple long equations, easy enough. I can’t help but picture some guy sitting down here with a joystick and carefully moving the satellite. But that’s not how that works.

No, no joysticks involved.

How do those commands get up to the satellite?

The flight ops team, which is underneath the Landsat Mission Operations Project. Most of these team members actually sit out at NASA Goddard. The flight ops team would issue a command that says at a certain time you will move the satellite. You will pitch the satellite for a certain amount of time. You’ll stop that and then you’ll roll the satellite for another certain amount of time. Then, the moon should be there. We really don’t know until we get the final images down to the ground and can process them. We haven’t missed it yet. I guess we have a good track record.

How much fuel does it take for the satellite to do that maneuver?

It actually doesn’t take any fuel. For these spinning, pitching, rotating, yawing maneuvers that we do, they actually use something called a reaction wheel. These are wheels that are physically on the satellite and they are always spinning. That is how it maintains its stability and direction it is pointing. Then if you change the direction that these wheels are spinning, that will cause a rotation of the satellite. So, it is actually by these wheels that are always spinning and you turn one and that will make the satellite respond in kind.

Do we worry about losing images of the land while we do this lunar observation?

No, we don’t lose any land imagery. If you can kind of think of how the sun, the earth and the moon are all aligned. When we have a full moon, that is actually when the moon is behind the earth in reference to the sun. So as the sun, the earth and then the moon kind of in line, we are actually imaging the moon when we are on the dark side of the earth, on the ascending orbit from Landsat. So, we can take an entire swath of earth imagery when the earth is daylit. Then as the satellite passes onto the dark side where it would be dark, there is no light there, that’s when we can actually do the maneuver and look at the fully illuminated moon. Then, we complete the maneuver and move back before we would need to acquire earth imagery again.

Are those Landsat images of the moon publicly available?

They are not typically publicly available. We are not hiding them or anything. As I said, it is in focus but the pixels are quite large. It’s just not that clear, crisp, clean lunar images that we’ve seen. Right? Everyone likes that nice pretty picture of the moon. 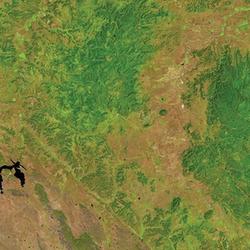 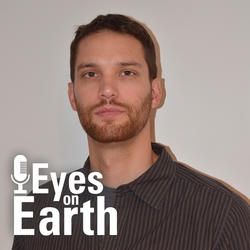 Eyes on Earth is a podcast on remote sensing, Earth observation, land change and science, brought to you by the USGS Earth Resources Observation and Science (EROS) Center. In this episode, we hear how calibration teams use the surface of the moon and unchanging landscapes to improve Landsat data.

Eyes on Earth is a podcast on remote sensing, Earth observation, land change and science, brought to you by the USGS Earth Resources Observation and Science (EROS) Center. In this episode, we hear how calibration teams use the surface of the moon and unchanging landscapes to improve Landsat data. 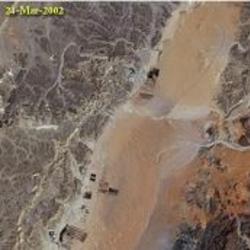 The Landsat satellites were designed to detect landscape changes over time. However, sometimes what Landsat needs to see on the Earth’s surface is no...

In a world where observing Earth’s landscapes from space has become more common for government agencies and commercial ventures, there is a question...