RESTON, Va.— A team of state and federal scientists have discovered an area in northern Maine that is high in critical mineral resources, highlighting for the first time the importance of this region to the U.S. mineral resource economy.

The team’s findings are described in a new publication by scientists from the University of Maine at Presque Isle, U.S. Geological Survey (USGS), and the Maine Department of Agriculture, Conservation and Forestry’s Maine Geological Survey (MGS).

The elements were found in rocks in the vicinity of Pennington Mountain, a remote peak in central Aroostook County, about 40 miles northwest of Presque Isle, Maine. The discovery included rare earth elements, niobium, and zirconium, which are important for electronics, defense, and manufacturing applications.

This research was conducted as part of the USGS’s Earth Mapping Resources Initiative project, a partnership between the USGS and state geological surveys to modernize our understanding of the nation’s fundamental geologic framework and mineral resources through new geologic maps, geophysical and topographic surveys, and geochemical sampling. Earth MRI aims to identify areas with potential for undiscovered critical mineral deposits that could reduce U.S. mineral import dependence, thereby strengthening national security, creating jobs within the private sector, and generating ancillary economic and social benefits.

Bipartisan Infrastructure Law funding has accelerated this new mapping in areas with potential for hosting critical mineral resources both still in the ground and occurring in mine wastes. Funding was also provided by the USGS National Cooperative Geologic Mapping Program through its STATEMAP project. While analyzing the survey data, USGS research geophysicist Anji Shah found an anomaly: a geological feature that looked similar to others that contain rare earth elements and other critical mineral resources.

“This is really exciting scientifically,” said Shah. “As we were examining the data, all of a sudden, this feature caught my eye. I knew immediately we had something special here.”

“The project has resulted in rewriting of the geologic and tectonic history of the region, and the Earth MRI airborne geophysical survey greatly helps the bedrock mapping and assessment of mineral potential,” said Chunzeng Wang, lead author of the paper and professor of earth and environmental sciences at the University of Maine at Presque Isle. “It is truly excellent teamwork. The level of support and cooperation by the USGS, the MGS, and my university is unprecedented.”

“It’s a perfect example of the science working just as intended and the importance of scientific collaboration. Having all of us involved meant as soon as we identified the feature, Professor Wang was onsite within a day to do the recon work,” said Maine Geological Survey scientist Amber Whittaker, project lead for the MGS. “It shows how much there is still to discover about Maine’s geology.”

Geological exploration would be required to know whether this discovery might be an economically significant deposit. “If mining is eventually considered, a rezoning application would need to be submitted to DACF’s Land Use Planning Commission,” said Maine Land Use Planning Commission Acting Director Stacie Beyer. “It would need to meet Maine’s stringent environmental standards, including at least two years of baseline environmental monitoring before a mining permit application could then be submitted to the Maine Department of Environmental Protection.”

“This discovery shows the importance of new evaluations for potential critical mineral resources based on integrated studies involving geophysics, geology, and geochemistry,” said USGS scientist emeritus John Slack of Farmington, Maine, who participated in the project and coauthored the new publication.

“Northern Maine was geologically ignored for many decades until recently, when MGS received funding to conduct a multi-year bedrock mapping project with the support of the USGS STATEMAP program,” said Wang. “The MGS geologic maps helped narrow down the locations where more information could make a difference.”

The geologic feature was revealed by surveys flown by aircraft in 2021. The flights collected geophysical data, such as variations in Earth’s magnetic field and natural low-level radiation. These variations are created by different rock types beneath the trees and up to several miles beneath the surface. Because each rock type has its own signature, like a fingerprint, the data can give a better idea of what lies beneath the ground surface.

Once USGS scientists noticed the unusual feature in the data, they sent the results to Wang, who quickly went to Pennington Mountain to collect rock samples and then sent them to a laboratory for geochemical analysis.

“I was astonished when seeing the analytical results that the rocks were so significantly enriched in rare earth elements and several trace metals,” Wang explained. “Northern Maine is full of amazing geologic wonders. You never know what is next to discover.”

Analyses of these samples show that they chemically match similar rocks in eastern Australia and central China that are known to be enriched in rare earth elements, niobium, and zirconium. Rare earth elements are important components in electronics like smartphones, as well as renewable-energy applications like wind energy and battery components. Niobium, meanwhile, is an essential element in steelmaking, and in superalloys used for things like jet engines. Zirconium is primarily used in ceramics, as well as some superalloys.

Mapping and other geological work is continuing in the Pennington Mountain area. Future research aims to identify the depth of the geologic deposit, as well as how it formed, and which specific minerals contain the rare earth elements identified to date. The publication also suggests that similar deposits may exist in other areas of northern Maine, and that scientists hope to apply the lessons learned in Maine elsewhere in the country and in the world. 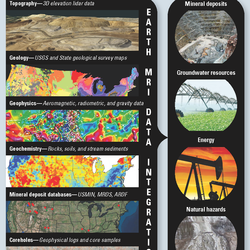 The goal of Earth MRI is to improve our knowledge of the geologic framework in the United States and to identify areas that may have the potential to contain undiscovered critical mineral resources. Enhancement of our domestic mineral supply will decrease the Nation’s reliance on foreign sources of minerals that are fundamental to our security and economy.
Learn More
link
May 12, 2021

Editor: In the public interest and in accordance with Federal Aviation Administration regulations, the...

A total of $118,479 will fund new research and preserve important data across the Pine Tree State