Powell quickly leveraged his 1869 fame to start planning the 1871 second trip. Art and science would be the justification for this second trip.

Powell’s 1871 expedition was better organized and better equipped. In contrast to the courageous yet rag tag crew that joined the first journey, the second journey was composed of carefully chosen artists, photographers, and scientists. The images of this journey we see today were composed by John Karl “Jack” Hillers (photographer), Francis Marion Bishop (topographer), Steven Vandiver Jones (topographer), E.O. Beaman (photographer), and Fredrich “Frank” Dellenbaugh (topographer/artist).  The science was conducted by Almon Harris Thompson (geographer), Frank Richardson (assistant geologist), and John Fletcher Steward (geologist). Dellenbaugh was assigned the Lead Artist role and the famed painter Thomas Moran, who was a late add-on, was given the roll of Guest Artist. At 17 years old when they launched, Dellenbaugh learned wet plate photography and sharpened his topography skills on the river. The more seasoned Moran spent very little time, if any, on the river. Powell requested that Moran take an overland route via horseback from Salt Lake City to the Virgin River and then up to the North Rim of the Grand Canyon, the hope being that Moran could create images of the Grand Canyon that would rival and compliment his famous painting The Grand Canyon of the Yellowstone. To accomplish this, Moran and Dellenbaugh worked with graphite, watercolors, and gouache in the field to capture the colors and shapes of the river and the fantastic land formations found throughout the basin.  Moran also spent a great deal of time working with young Jack Hillers, helping haul equipment and compose many of the photographs. He would later use these photographs in his studio to help him with the nuances and geological details of the canyon country.

Their goal on the second expedition was to gain a deeper understanding of the unique geology; map the geography; and capture images of the Green and Colorado rivers. The tales, science, and images produced by the explorers fed the imagination of a curious public in the East. The fantastic images created on the 1871 expedition played a huge role in selling the West and the concept of Manifest Destiny. Along with Powell’s popular (yet historically unreliable) journals, the photographs, drawings, etchings, and paintings produced helped turn the West from a blank spot on the map into an approachable and attractive space to settle. Together, the written words and images helped promote the West as a promised land to a country in the mire of the Reconstruction. Trains were in place; most native people were displaced onto Western reservations; and the seemingly unlimited natural resources were there for the taking.

Working on the shoulders of Powell and Moran gave me an understanding of how we got to 2019 and helps me think about the future of the West. My challenge was to find content in a landscape that is, for the most part, unspoiled, raw, and in a natural state. Of course, the numerous dams control the seasonal flows, so there is little wash-out happening in the canyons. The “leave no trace” ethic on the river corridor leaves us a landscape that feels to me like it is in a bubble, frozen in time. Most of the land along the river is the kind of protected land that I have spent my 30 years avoiding in my depictions of the West, my belief being that, Moran, Albert Bierstadt, Fredrick Church, and many others did an excellent job of depicting the pre-Manifest Destiny landscape (and natural resources) of North America. With that in mind, I committed my compositions to the less-protected lands. The interaction between our encroaching culture and the realities of nature is fascinating to me. I often set up and sketch on the outskirts of town, behind a truck stop, or on the side of the highway while travelers blow by on their way to embrace our pristine National Parks. The canyons offered me the chance to face the land in a way that is not all that different than what Powell and Moran experienced. Ironically, the pristine character of much of the landscape today reflects the heavy hand of culture maintaining the appearance of primitive to the benefit of all.

On a chilly evening in the Spring of 2016, I was honored when SCREE trip leader, Thomas Minckley, paid me a visit and asked me to serve as lead artist. I quickly committed and signed on as one of the three crew members to float the total distance from Green River, WY, to the Virgin River, NV. My role as lead artist had many facets. I was expected to produce art; educate myself; research the Colorado River Basin; select pertinent artists to join us on the river; and organize numerous art exhibits. Long before the launch, I was committed to spend any free time seeking out locations along the river to camp, draw, and explore this new subject. Also, I was motivated to look deeper into the field drawings of Thomas Moran, whose work has been an inspiration for my studio practice for over ten years. My research into the Moran archives of the Gilcrease Museum in Tulsa and Yellowstone National Park was a treat. Field drawing is a tough task. Even if an artist has all day in perfect conditions, it is a fool’s game to try to get it all rendered at once. In the field, Moran was a master of composition, line, and color.  I was hoping to gain an understanding of how he was so successful in his ability to create field drawings that hold visual economy yet feature finely-tuned specificity. I am still stumped, but will not forget my privileged days in the archives.

Our 71-day, 1000-mile Sesquicentennial Colorado River Exploring Expedition (SCREE) was composed more like Powell’s second trip down the Green and Colorado rivers. Scientists, artists, and writers worked together on the trip. SCREE was an outward-facing expedition. With that understanding, we were expected to produce and exhibit relevant work featured in an expanded art exhibit entitled ‘Contemporary Views of the Arid West: People, Places and Spaces.’  This “expanded art exhibit” was featured in museums in riverside communities during our voyage. Other than myself, the roster of SCREE artists included David Jones (sculpture), Bailey Russel (photography), Will Wilson (photography), and Erika Osborne (painting/drawing). They joined the expedition for shorter sections. Also, University of Wyoming geography graduate student, Ben Kraushaar spent much of his shore time behind a video camera documenting the experience. There were no expectations that SCREE artists would respond directly to the science being done on the expedition, which allowed for artists to create images from their personal experiences.  The idea was that the artists would make art in the field and that the scientists would collect data and discuss their research in an informal setting. If one practice influenced the other, it would happen in an organic way. When working in the field, artists were faced with the powerful beauty of the canyons while being aware of the many issues facing public land: water scarcity, Native American realities, and more. SCREE artists took a contemplative approach to the actualities of John Wesley Powell’s recommendations to Congress and the myths embedded in Manifest Destiny.

Thinking about the future is a difficult thing to do. Painting it is even harder. I am unsure about how my work will be received, and if I have any new content to add to the multi-layered conversation. At this point, I can humbly hope that my work can serve future artists. I hope it serves as a voice for the lesser-known public lands. I am hopeful that the inspiration that I have gleaned from Moran’s sketches can be carried through to the next generation of artists. Unlike the 19th century expeditions, SCREE artists had drones, helmet-mounted video cameras, digital cameras, and sound-recording devices. This left me wondering, will there even be a future artist that will choose to use graphite and watercolors? Now, I expect there will be. After all, I’m using materials that are not that different from the famed Barrier Canyon Style artists whose paintings are 10,000 years old and can be seen today on the canyon walls. I suppose future river voyagers will carry sketchbooks, journals, pencils, watercolors, harmonicas, and acoustic guitars. I believe these materials will continue to be attractive to artists that are committed to making direct marks of expression. I hope my work can play some defense for drawing and painting in a world that is becoming increasingly saturated with landscape images that are digitally manipulated into idyllic, screen-saver perfection. 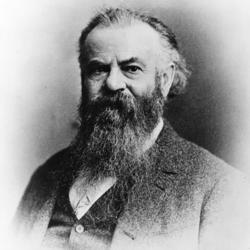 A Vision of the West from the 19th and 20th Century River Expeditions
Learn More
December 14, 2020

The 150th anniversary of the 1869 Powell expedition—USGS participation in the Sesquicentennial Colorado River Exploring Expedition and reflections from the ~1,000-mile journey down the Green and Colorado Rivers

In 1869, John Wesley Powell completed the first well-recorded scientific river journey to explore an extensive region of the Colorado River Basin. Powell later helped to establish the U.S. Geological Survey (USGS) and served as its second director (1881–94), cementing his position in the folklore of the Survey. In 2019, the USGS marked the 150th anniversary of Powell’s first expedition with a broa
By
Office of Science Quality and Integrity