In Blue Water: Tracking Animals in the Open Ocean

Late this spring, USGS biologists Morgan Gilmour and Josh Adams rode a boat across a sparkling blue tropical lagoon in search of seabirds.

This was no tropical vacation—Gilmour, Adams, and their colleagues were boating around Palmyra Atoll to attach tracking tags to seabirds, sharks, rays, tunas, and dolphins. For eight days, the research team worked hard deploy a total of 95 sophisticated tracking tags, which are now sending back data showing where these animals are traveling.

The goal of the project, a collaboration between the USGS,  The Nature Conservancy, NOAA, and other partners, is to learn how marine animals use the open ocean habitats around Palmyra. Open ocean, or “blue water,” is the largest and one of the least protected habitats on Earth.

“We want to know if those species are going to other islands, other atolls, other reef systems,” says Gilmour. “Are they primarily relying on Palmyra for their resources, and then occasionally going out there? Or are they regularly hitting up five different reefs within a month?”

These patterns matter when it comes to designing marine protected areas (MPAs), designated areas  where human activities are restricted to meet conservation goals.  A species that spends most of its time and gets most of its resources within the bounds of the designated area is likely well-protected; a species that spends a lot of time venturing outside of the boundaries may be more vulnerable to threats like overfishing, energy development, and other human activities.

In the United States, a 2021 Executive Order directed federal officials and the Department of Interior to protect 30% of US lands and ocean waters by 2030, echoing a 2016 call by the International Union for the Conservation of Nature to protect 30% of the ocean globally. Blue water MPAs can help the United States and other nations meet this goal. USGS scientists, together with partners, are studying their efficacy to provide science that will help guide the design and management of MPAs.

A Marine Protected Area Twice the Size of Texas

Palmyra Atoll  is  a National Wildlife Refuge made up of about 30 small islands surrounded by 15,000 acres of coral reefs. Palmyra is also pretty remote—it is about 1,000 miles south of Hawai‘i, just north of the equator. As a result, its reefs and waters are unusually clean and healthy, making it an ideal place to see how an ecosystem behaves when it’s relatively free of human disturbance. In addition to being a National Wildlife Refuge, it is also a part of the Pacific Remote Islands Marine National Monument, a massive marine protected area five times the size of all U.S. National Parks combined and nearly twice the size of the state of Texas. That protects a lot of open ocean, in addition to the islands and reefs.

When it comes to marine protected areas, however, there’s no one-size-fits all, even when the size of the protected area is really, really big. The animals of Palmyra Atoll move through the ocean differently, and the efficacy of Palmyra’s blue water marine protected area may vary among species. For example, sooty terns forage at the surface and are expected to range up to 1000 km (more than 600 miles) from the atoll during the breeding season, while melon-headed whales dive to depths of 400 m to forage on squid at night., Each species uses, and benefits from, the MPAs differently.

In a paper published this spring, the research team examined how the existing protected area boundaries around Palmyra compare with the known ranging capacities among nine marine species. They concluded that at Palmyra, the MPA may effectively protect three reef species (grey reef shark, green sea turtle, bottlenose dolphin), but other, more far-ranging species like yellowfin tuna, sooty tern, great frigatebird, and melon-headed whale may travel beyond protected waters.  This type of information is extremely valuable as it can help identify species that seem well-protected now given existing boundaries, and yet may face increased risks as their habitats shift under climate change.

Sharks, Dolphins, and Boobies, Oh My!

The tracking tags deployed this spring will build on these findings and help the research team understand complex marine animal movement patterns around Palmyra. The team is capturing movements deep and shallow, near the reef and far out in the open ocean—it’s a big job that requires a lot of teamwork to coordinate all the (literally) moving parts.

A typical day of tagging in Palmyra would start between 6:30 and 7:30 am. The research team split into two groups: a seabird team, led by Gilmour, and an offshore team led by Gilmour’s counterpart at The Nature Conservancy, Kydd Pollock, who tagged tunas, sharks, rays, and dolphins.

The seabird crew would boat from the research station across the lagoon to one of several islands making up the atoll. From the boat, they’d scan nests with binoculars, and when they spotted an easily accessible nest, they’d anchor the boat, load up their bucket of equipment, and wade to shore.

To attach a tag, the first step is safely capturing a bird, and that’s no easy task—it takes at least two, sometimes three people. Next, the team weighs the bird to make sure it is big enough to travel with its tag without compromising flight (after all, learning where the birds fly during their nesting period at Palmyra is the entire point!). Finally, the researchers tape a small tag to the bird’s tail feathers, take a few other measurements, and release the bird back to its nest.

Meanwhile, the offshore team would load into a bigger boat and head out into the open water outside the atoll. Though the offshore team’s aim was to tag fish and marine mammals, they’d also be looking for birds. Seabirds seek out the same prey that support the tuna, sharks, and dolphins.

Altogether, the team deployed 95 tags across 10 species. Because different types of tags work best for different species, they used 11 types of tags, each with their own benefits and quirks.

Some of the tags transmit location data to satellites in real-time. Some transmit archived GPS data to a local base station on Palmyra. Other types store the data on the tag, and the team must recapture the birds to get the tags and data. Still others, like the tags attached to the tunas, sharks, and rays, are programmed to detach, and float to the ocean surface after 6-12 months, and then transmit their data to satellites.

It’s a waiting game for some species, but for others, the preliminary data are already streaming in. Some of the tracks matched expectations, but there were surprises, too. Take the dolphins: most seemed to “do laps” around Palmyra, while one melon-headed whale headed farther afield, all the way to Kingman Reef.

“Everybody was pretty excited to see that,” says Gilmour.

The red-footed boobies seemed to congregate in an area southwest of the atoll. “There must be something good over there,” Gilmour says. Seabirds like the red-footed boobies forage offshore for flying fishes and squids, then return to land to nest and feed their young. Previous research has found that the seabirds’ poop provides required nutrients to support Palmyra’s tropical forests, showing that fish and forests are connected through the food web.

The Palmyra project is just one example of how USGS scientists are using satellite trackers to study marine wildlife.  Adams, who oversees the USGS Western Ecological Research Center Seabird Studies team working in Palmyra, is also tracking seabirds that live and breed along the Pacific Coast and in the Hawaiian Islands, as well as seabirds that range widely across the ocean, like albatrosses. While the Palmyra project is focused on MPAs, other similar projects are informing other aspects of marine planning. Seabird tracking in Hawai‘i and off the California coast informs planning for offshore wind energy. The studies of albatrosses and their relatives also address the impacts of fishing vessels and marine pollution and provide data for international management.

With the trackers deployed, new data points appear each day, and more will arrive in the coming months, revealing the paths of each tagged species. By better understanding animal movements, natural resource managers can more effectively evaluate how the marine planning and decision making can best protect these diverse animals and their habitats, now and into the future. 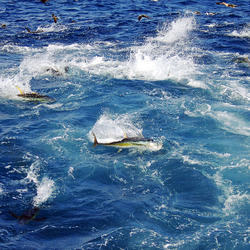 In collaboration with The Nature Conservancy, the Seabird Studies Team at the USGS Western Ecological Research Center will track the at-sea movements of eight marine animal species at Palmyra Atoll with the goal of understanding the impact of the marine protected areas on species and ecosystems. The project is supported in part by The Nature Conservancy and the team of collaborating researchers...
By
Western Ecological Research Center (WERC)
link
January 28, 2021

In collaboration with The Nature Conservancy, the Seabird Studies Team at the USGS Western Ecological Research Center will track the at-sea movements of eight marine animal species at Palmyra Atoll with the goal of understanding the impact of the marine protected areas on species and ecosystems. The project is supported in part by The Nature Conservancy and the team of collaborating researchers...
Learn More
link 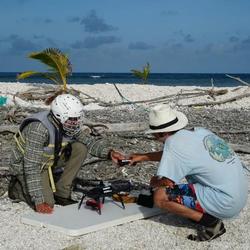 Lying 1000 miles south of Hawaii, Palmyra Atoll is a marine wilderness co-managed by the US Fish and Wildlife Service and The Nature Conservancy. Beach forests of Pisonia grandis and other vegetation communities provide habitat for thousands of nesting terns, boobies, and other birds. Introduced coconut (Cocos nucifera) groves and use of Palmyra as a World War II airfield left a legacy of invasive...
By
Columbia Environmental Research Center
link
June 21, 2018

Lying 1000 miles south of Hawaii, Palmyra Atoll is a marine wilderness co-managed by the US Fish and Wildlife Service and The Nature Conservancy. Beach forests of Pisonia grandis and other vegetation communities provide habitat for thousands of nesting terns, boobies, and other birds. Introduced coconut (Cocos nucifera) groves and use of Palmyra as a World War II airfield left a legacy of invasive...
Learn More
link 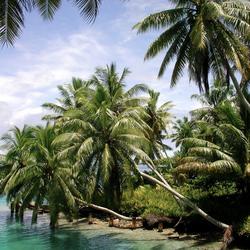 Palmyra Atoll is a low-lying coral atoll and National Wildlife Refuge located south/southwest of Hawaii near the equator in the central Pacific Ocean. USGS is a member of the Palmyra Atoll Research Consortium, which fosters collaborative multi- and inter-disciplinary studies by U.S. Department of the Interior agencies (USGS and U.S. Fish and Wildlife Service), academic institutions, and non...
By
Western Ecological Research Center (WERC)
link
March 28, 2017

Palmyra Atoll is a low-lying coral atoll and National Wildlife Refuge located south/southwest of Hawaii near the equator in the central Pacific Ocean. USGS is a member of the Palmyra Atoll Research Consortium, which fosters collaborative multi- and inter-disciplinary studies by U.S. Department of the Interior agencies (USGS and U.S. Fish and Wildlife Service), academic institutions, and non...
Learn More