Wave height could still be hazardous to nearshore communities.

ANCHORAGE, Alaska – Waves from a potential landslide into the Barry Arm of Prince William Sound could reach heights up to 7-feet just offshore Whittier, according to a new report by the U.S. Geological Survey. This “worst-case scenario” is much less severe than the preliminary 30-foot-high wave assessment previously issued by an interdisciplinary team of scientists in 2020.

The updated wave height estimates come after a months-long effort by state and federal scientists to investigate the Barry Arm landslide and assess its risk to those around the Prince William Sound. The newly reported values represent the most extreme of four of the report’s scenarios considering what would happen if the entire landslide fails catastrophically into the arm. The other three scenarios in the report resulted in smaller, but still potentially hazardous, wave heights.

The new USGS study draws upon two recent partner datasets that allowed researchers to better refine what might happen if the landslide were to enter the Barry Arm fjord. One of these was collected in the fall of 2020, when the National Oceanic and Atmospheric Administration mapped the seafloor near the landslide, generating high-resolution bathymetric data vital to modeling tsunami wave conditions. USGS models also relied upon recent lidar landscape data from the Alaska Division of Geological and Geophysical Surveys, which was used to estimate the landslide volumes applied in each of the scenarios.

“There were a lot of unknowns early on,” said Jonathan Godt, USGS Landslide Hazards Program coordinator. “But with the new landscape and seafloor data we now have a better idea what might happen if the unstable slope was to fail. This summer we’ll get an even better idea as field activities ramp up and we put eyes on the landslide up close.”

Residents, businesses, mariners and recreationists throughout Prince William Sound should be aware of the potential risk, follow the advice of emergency managers and have a plan in place if a tsunami occurs. Bi-weekly updates on the status of the Barry Arm landslide can be found on the DGGS website at https://dggs.alaska.gov/hazards/barry-arm-landslide.html.

For more details about “Preliminary assessment of the wave generating potential from landslides at Barry Arm, Prince William Sound, Alaska” read the full report or view the datasets. 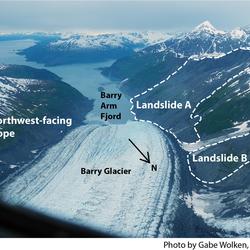 A large steep slope in the Barry Arm fjord 30 miles (50 kilometers) northeast of Whittier, Alaska has the potential to fall into the water and generate a tsunami that could have devastating local effects on those who live, work, and recreate in and around Whittier and in northern Prince William Sound.
By
Natural Hazards, Landslide Hazards
link
February 22, 2021

A large steep slope in the Barry Arm fjord 30 miles (50 kilometers) northeast of Whittier, Alaska has the potential to fall into the water and generate a tsunami that could have devastating local effects on those who live, work, and recreate in and around Whittier and in northern Prince William Sound.
Learn More
February 9, 2021

Map of landslide structures and kinematic elements at Barry Arm, Alaska in the summer of 2020

Two active landslides at and near the retreating front of Barry Glacier at the head of Barry Arm Fjord in southern Alaska (Figure 1) could generate tsunamis if they failed rapidly and entered the water of the fjord. Landslide A, at the front of the glacier, is the largest, with a total volume estimated at 455 M m3 (Dai et al, 2020). Historical photographs from Barry Arm indicate that Landslide A
By
Natural Hazards, Landslide Hazards, Geologic Hazards Science Center
November 20, 2020

Subaerial landslides at the head of Barry Arm Fjord in southern Alaska could generate tsunamis (if they rapidly failed into the Fjord) and are therefore a potential threat to people, marine interests, and infrastructure throughout the Prince William Sound region. Knowledge of ongoing landslide movement is essential to understanding the threat posed by the landslides. Because of the landslides' rem
By
Natural Hazards, Landslide Hazards, Geologic Hazards Science Center
October 29, 2020

Detection and assessment of a large and potentially‐tsunamigenic periglacial landslide in Barry Arm, Alaska

The retreat of glaciers in response to global warming has the potential to trigger landslides in glaciated regions around the globe. Landslides that enter fjords or lakes can cause tsunamis, which endanger people and infrastructure far from the landslide itself. Here we document the ongoing movement of an unstable slope (total volume of 455 million m3) in Barry Arm, a fjord in Prince William Sound
By
Natural Hazards, Landslide Hazards, Alaska Science Center
link
August 18, 2020

A large steep slope in the Barry Arm fjord 30 miles (50 kilometers) northeast of Whittier, Alaska has the potential to fall into the water and...