“Graphite has not been produced in the United States since the 1950s. This release provides an update on the Nation's graphite resources and past production,” said Jeff Mauk, USGS lead scientist for USMIN.

Graphite is one of 50 mineral commodities included in the whole-of-government list of critical minerals published by the USGS. In 2021, the United States relied on foreign sources for 100% of the 53,000 metric tons of graphite it used. Primary import sources were China, Mexico, and Canada.

This data release contains sites with more than 1,000 metric tons of contained graphite resource and/or past graphite production. This is approximately 3% of the average annual U.S. consumption of graphite between 2016 and 2020.

Graphite’s main uses are in high-temperature lubricants, brushes for electrical motors, friction materials and battery and fuel cells. Although most famous for its use in pencil lead, that amount is a comparatively small percentage of the total graphite used in the United States.

The largest known graphite deposit in the United States is the Graphite Creek deposit in Alaska where recent industry exploration has identified a measured and indicated resource of more than 10 million metric tons of ore with 7.8 to 8 percent graphite. The deposit is being evaluated to decide whether it can move forward to production.

“USGS is updating USMIN with data, including historical mining activities, for every critical mineral," said Mauk. "The most recent addition was gallium, an important component for laser diodes, light-emitting diodes (LEDs), photodetectors and solar cells.”

USMIN is a national-scale geospatial database that is the authoritative source for the locations of the most important current and historical mines, mineral deposits and mineral districts of the U.S. 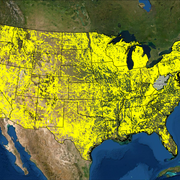 Our objective is to develop a national-scale, geospatial database that is the authoritative source of the most important mines, mineral deposits, and mineral districts of the United States.
Learn More
link
March 11, 2021

In the latest database update based on the Critical Minerals List, the USGS has added Gallium to USMIN.

The USGS has added the critical mineral commodity tantalum to USMIN.

The U.S. Geological Survey (USGS) has updated its USMIN Mineral Deposit Database (USMIN) for the mineral commodity niobium, one of 35 mineral...

The USGS has updated its USMIN Mineral Deposit Database for the mineral commodity tungsten, one of 35 minerals declared critical by the Department of...