Utilizing Tree Swallows as Indicators for Contaminants in the Great Lakes

This Story Maps accompanies 4 peer-reviewed publications to provide a convenient and useful tool to access the information contained within these four peer-reviewed publications.  The tree swallow data are easily visualized on a landscape scale, or more detail can be obtained by drilling down.  These data are being used by States and EPA in their Beneficial Use Impairment (BUI) assessments.

Great Lakes Restoration Initiative (GLRI) research using tree swallows as the model species began in 2010 at 10 AOCs and 2 non-AOCs, and was expanded in each to work on additional AOCs and non-AOCs until work had been done at a total of 27 AOCs and 10 non-AOCs.  Contaminant assessments, reproductive success, and biomarker analyses were conducted for 2 years at most AOCs, although additional data were collected at some more highly contaminated AOCs.  Approximately 20 nest boxes were placed in suitable habitat within the AOC and then monitored between early-May and July each year.  This is the time period that tree swallows are present and nesting is underway.  At some locations where dredging and other habitat improvements have been done, pre- and post-dredging data were collected to assess the effectiveness of those management actions.

Polychlorinated biphenyls (PCBs) were one of the predominant chemical classes that were identified as a chemical of concern within  many AOCs.  Since manufacture and usage of polychlorinated biphenyls (PCBs) were banned in 1979, exposure in biota have been declining across North America.  This work quantifies current levels of PCB exposure to understand whether risk to wildlife still remains.  Approximately 40% of AOCs had geometric mean concentrations of total PCBs were at or below background exposure (0.34 μg/g wet wt.) and 78% of AOCs had mean exposure less than the mean at the most contaminated non-AOC location (0.93μg/g).  Even at AOCs with higher exposures to PCBs, concentrations were 10 – 20 times below the lower limit for hatching effects (~20 μg/g wet wt. in eggs).

Dioxins and furans, some of the most toxic chemicals present in the environment.  Dioxins and furans tended to be unintentional by-products in various chemical processes, but none the less have become widespread in the environment.  All but two locations, one AOC and one non-AOC, had geometric mean concentrations of dioxin and furan toxic equivalents (TEQs) in eggs below background levels (87 pg/g dioxin/furan TEQs).  At those two locations the geometric mean exceeded the lower limit for hatching effects (181 pg/g dioxin/furan TEQs).  At 67% of AOCs, the total PAH concentrations in nestling diet samples were below the mean concentration for non-AOCs (132 ng/g wet wt).  Additionally, total PAHs from 76% sites were below the mean value for the most contaminated non-AOC site (532 ng/g).  Concentrations of PAHs in diet were sufficiently elevated at some AOCs to elicit a measurable physiological and reproductive response.

Finally, many of the legacy contaminants, such as organochlorine insecticides, which have been banned for many years are now at, or below, background or no-effect concentrations.

One way to assess possible effects of contaminant exposure is to measure biomarker responses.  Biomarkers, also called bioindicators, are commonly used to evaluate physiological and genetic responses in birds that have been exposed to environmental contaminants.  Nestling tree swallows were evaluated for numerous bioindicator responses including ethoxyresorufin-O-dealkylase (EROD) activity, chromosomal damage (DNA-CV), and five measures of oxidative stress.  Measuring biomarker responses are important because they signify, if significantly different from the normal rates, that exposure was sufficient to illicit a physiological response.  A physiological response, however, does not necessarily constitute an’ effect’.  Concentrations of polycyclic aromatic hydrocarbons (PAHs) and to a lesser degree total PCBs were the major contributors to significant differences between the lowest and highest EROD activities.  PAHs, dieldrin, and PCBs, in that order, were the major contributors to the differences in chromosomal damage, although none rose to the level of significance.  Finally PAHs followed by heptachlor and PCBs were the major contributor to significant differences between high and how TSH and  PBSH oxidative stress measures. 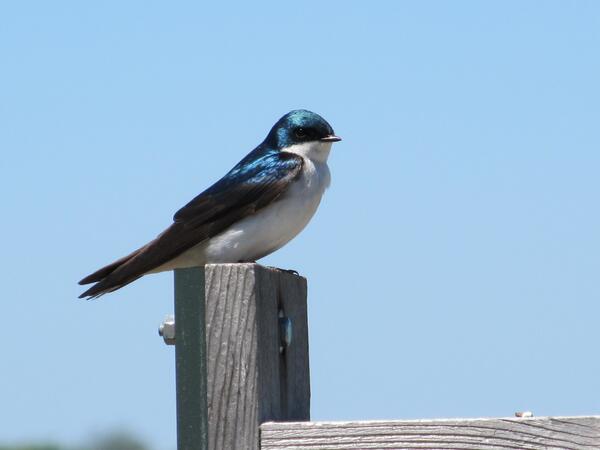 Tree swallow, Tachycineta bicolor, nestlings were collected from 60 sites in the Great Lakes, which included multiple sites within 27 Areas of Concern (AOCs) and six sites not listed as AOCs from 2010 to 2014. Nestlings, approximately 12 days-of-age, were evaluated for ethoxyresorufin-O-dealkylase (EROD) activity, chromosomal damage, and six measures of oxidative stress. Data on each of these biom
By
Ecosystems, Contaminant Biology, Upper Midwest Environmental Sciences Center
December 14, 2016

Contaminant exposure of tree swallows, Tachycineta bicolor, nesting in 27 Areas of Concern (AOCs) in the Great Lakes basin was assessed from 2010 to 2014 to assist managers and regulators in their assessments of Great Lakes AOCs. Contaminant concentrations in nestlings from AOCs were compared with those in nestlings from nearby non-AOC sites. Polychlorinated biphenyl (PCB) and polybrominated diphe
By
Ecosystems, National Wildlife Health Center, Upper Midwest Environmental Sciences Center
July 22, 2016

Tree swallows, Tachycineta bicolor, were sampled across the Great Lakes basin in 2010 through 2015 to provide a system-wide assessment of current exposure to organic contaminants. The results provide information identified as critical by regulators to assess the “bird or animal deformity or reproductive problems” beneficial use impairment. Eggs were collected from 69 sites across all 5 Great Lakes
By
Ecosystems, Contaminant Biology, Environmental Health Program, National Wildlife Health Center, Upper Midwest Environmental Sciences Center
March 13, 2018