Updates on white-nose syndrome surveillance and research from the USGS National Wildlife Health Center in Fall 2019.

The USGS National Wildlife Health Center continues to play a central role in surveillance for white-nose syndrome (WNS) and the causative fungus, Pseudogymnoascus destructans (Pd). Since 2008, NWHC has tested samples from over 13,000 bats and 5,300 environmental substrates nationwide for the presence of WNS or Pd. For the 2018/2019 surveillance season, NWHC evaluated samples collected from 2,633 bats and 967 environmental substrates in 27 states. In all, 2,537 live bats and 72 dead or euthanized bats were tested. WNS was confirmed or suspected in a total of 28 bats while Pd was detected in another 41 bats from a total of 15 sites in 11 states. Tested bats belonged to eight species, with tri-colored bats (Perimyotis subflavus) and little brown bats (Myotis lucifugus) comprising 80% of all positive detections this past season.

Additionally, Pd was identified in one or more environmental samples from three hibernacula in three states (NC, OK, and KS); two sites of which also had bats concurrently testing positive for Pd. Although environmental samples continue to comprise only a small fraction of new Pd detections, this surveillance season all environmental detections originated from environmental swabs rather than sediment samples, which differed from the pattern observed in previous years.

For the 2018/2019 surveillance season, WNS was confirmed for the first time in a western long-eared bat (Myotis evotis), increasing the total number of North American bat species confirmed with the disease to 12. Furthermore, WNS was suspected in a fringed myotis (Myotis thysanodes) that demonstrated characteristic fluorescence under long-wave ultraviolet light and tested positive for Pd by PCR.

Since its 2016 emergence in Washington state, WNS was detected for the first time east of the Cascade Mountains in Kittitas County. The fungus was also detected for the first time in North Dakota (Mercer County) on a single little brown bat captured on the landscape in late May with no signs of disease, and Pd was suspected on bats at two Myotis spp. summer roosts in northern California (Plumas County). Significant spread of Pd was also reported this past surveillance season in multiple counties in central and southern Texas. The total number of states with confirmed cases of WNS, 33, remains unchanged from last year, while the number of states reporting Pd in the absence of clinical disease is now five (CA, MS, ND, TX, and WY). Of note, an unclassified species of Pseudogymnoascus sp. (not Pd) was detected on a skin swab from a hibernating little brown bat observed with fungal growth on its skin at a Montana cave. The significance of this finding remains unclear since histopathology was not available.

The USGS National Wildlife Health Center in collaboration with the University of Wisconsin, Kansas State University, and an advisory team comprised of various Federal and State agency partners are leading efforts to develop a model-based, strategic Pd surveillance sampling design for the upcoming winter season. The benefits of a model-based approach include improving the efficiency of surveillance over random sampling by targeting high risk areas, making better use of limited resources while reducing the time to find new hotspots of Pd on the landscape as it spreads westward, and allowing for more accurate inferences to pathogen presence/absence by leveraging all available information on the growth and spread of Pd from on-going surveillance efforts to facilitate more impactful management actions at the regional or national scale.

Additionally, a weighted surveillance calculator tool is being developed similar to that used for chronic wasting disease surveillance in white-tailed deer that accounts for the differences in Pd detectability observed among sample types and time of collection. Managers will be able to input what sample types they intend to collect and determine the necessary number of each sampling combination in order to achieve the desired level of confidence for Pd detection within their state.

Evaluation of a New Sampling Method for Pd Surveillance

The USGS National Wildlife Health Center is evaluating the use of guano collected at above-ground summer roosts of susceptible bat species as another potential tool for managers in their quest to detect the spread of Pseudogymnoascus destructans (Pd). Currently, surveillance primarily involves collecting skin swabs or environmental substrate at underground sites during winter hibernation. However, there are regions where hibernacula are unknown or inaccessible, particularly in the western United States. Results of preliminary field and laboratory experiments indicated that analyzing pooled guano collected at summer roosts may be a promising alternative surveillance strategy for early detection of Pd as it spreads to new regions.

We conducted pilot field studies during summers 2018 and 2019 in states along the leading edge of the pathogen’s distribution to provide proof-of-concept for this sampling strategy. Sites that were within 200 km of the nearest Pd detection and that contained Myotis species were targeted. Partners were instructed to collect fresh guano after a four-week accumulation period starting in mid-May, shortly after bats started to arrive from hibernation, to optimize detection probability based on preliminary experiments. Although Pd was not detected at any of the field sites during summer 2018, several challenges were encountered that led us to repeat the field trials in 2019, with improvements to site selection criteria and sampling guidance. While analysis is still ongoing, we have been able to detect Pd in several of our summer study sites in 2019. Given the time and cost of processing samples, we are still evaluating the benefits of this sampling method for potential inclusion in national surveillance efforts.

White-nose syndrome (WNS) in bats is caused by the fungal pathogen Pseudogymnoascus destructans (Pd). Since its initial discovery the pathogen has spread rapidly and caused staggering population-level impacts on many species of hibernating North American bats. Managers depend on consistent laboratory results to make decisions, but currently diagnostic testing for Pd is conducted by multiple agencies and institutions that lack a shared governance for setting testing standards and overseeing reporting. Scientists at the USGS National Wildlife Health Center, in cooperation with the WNS National Response Team Diagnostic Working Group, the U.S. Fish and Wildlife Service (USFWS), and State and Federal resource managers, are building consensus around how Pd diagnostic tests should be conducted, and how results should be interpreted and communicated. To date, this effort has involved coordinating voluntary participation in assay performance testing, collating and analyzing the testing data, and facilitating Working Group conversations regarding common language for classifying Pd qPCR results that will be incorporated into a revised WNS case definition. Additional steps will further formalize a WNS Diagnostic Laboratory Network by initiating voluntary Pd qPCR proficiency testing (first round to take place in the Spring of 2020) and compiling newly agreed-upon testing and communication standards into a WNS Laboratory Best Practices Handbook that will be available publicly. Whether for people, domestic animals, or wildlife, confidence in diagnostic results is a cornerstone of disease management. We hope that this work will improve the confidence of management agencies in reported Pd diagnostics, while also serving as an example of national diagnostic coordination for other, non-reportable, wildlife diseases.

Development of Vaccine for White-nose Syndrome

USGS National Wildlife Health Center scientists are developing several topically applied vaccine candidates against the fungus, Pseudogymnoascus destructans (Pd), that causes white-nose syndrome. Several vaccine candidates have been tested to determine which provides the best protection to hibernating bats. Scientists have conducted animal trials in hibernating, captive little brown bats (Myotis lucifugus), to ensure that the vaccines are safe and effective. After careful review of potential environmental impacts, the U.S. Department of Agriculture Center for Veterinary Biologics recently approved the experimental vaccines for field testing in wild bats. Scientists will deliver the oral vaccines to bats residing in hibernacula known to harbor Pd and monitor survival during and after hibernation. Once developed, the goal is to use the vaccine to confer disease resistance and to safeguard vulnerable bat populations. 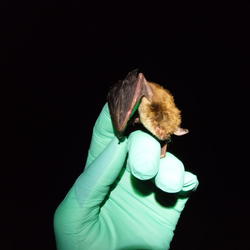 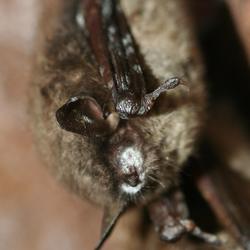 White-nose syndrome (WNS) is an emergent disease of hibernating bats that has spread from the northeastern across United States at an alarming rate.
By
Ecosystems, Biological Threats and Invasive Species Research Program, National Wildlife Health Center
link
February 1, 2018

White-nose syndrome (WNS) is an emergent disease of hibernating bats that has spread from the northeastern across United States at an alarming rate.
Learn More
August 30, 2019

A new study shows that vaccination may reduce the impact of white-nose syndrome in bats, marking a milestone in the international fight against one of...