Preliminary characterization of risk factors associated with Pd movement suggest that new detections are related to the distance to nearest known Pd-positive sites and only mildly associated with the size of a site’s hibernating bat population. We are also investigating use of community guano samples from summer roosts for Pd surveillance. This strategy has particularly utility for areas where bat hibernation sites are not known or are difficult to access.

In 2012 NWHC scientists collected swabs from bat wings, cave walls, and equipment used in and near study sites in Kentucky, Indiana, Ohio, Tennessee, and Virginia. They also collected guano from individual bats and sediment from the floor of underground summer roost sites. NWHC scientists found that bats occupying hibernation sites in summer can harbor Pd on their skin, and that Pd is more readily detectable in their guano. More findings are summarized in a USGS News Release: Deadly fungus affecting hibernating bats could spread during summer.

Despite active national surveillance efforts to detect the spread of WNS, the 2016 detection of WNS in Washington State illustrates the ongoing importance of investigating wildlife mortality events as part of a comprehensive wildlife disease surveillance strategy, and wildlife managers are encouraged to report unusual bat mortality or bats displaying clinical signs suggestive of WNS to the NWHC for further investigation. NWHC can also answer questions about designing WNS surveillance and response plans relevant to your state and help with testing samples collected as part of opportunistic or targeted surveillance efforts in accordance with the national Pd surveillance strategy.

If you are a private individual or entity with a question about white-nose syndrome in your area, please contact your state department of natural resources or state agency of game and fish. A list of State and Federal agencies can be found at fishwildlife.org.

If you are from a State, Federal, or Tribal agency, please see more information on reporting mortality events and submitting samples related to white-nose syndrome.  Tribal, State, and Federal agencies with questions about ongoing surveillance efforts, or who may wish to participate, should contact nwhc-epi@usgs.gov.

Below are photos related to white-nose syndrome surveillance.

More photos related to white-nose syndrome are available in the WNS Image Gallery. 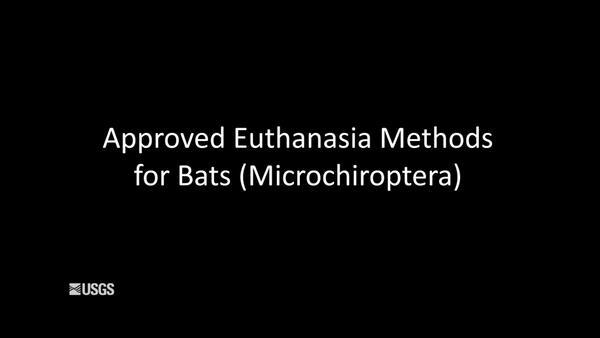 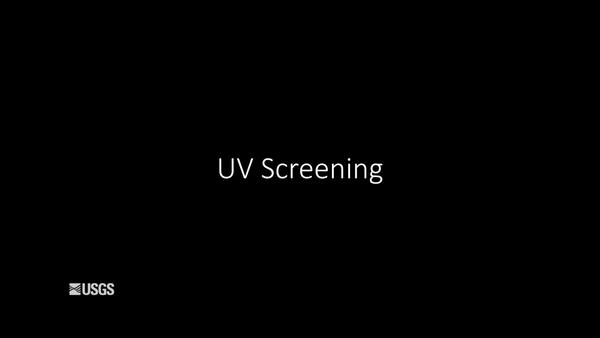 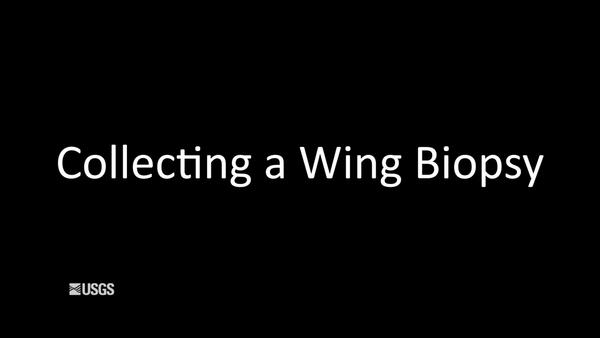 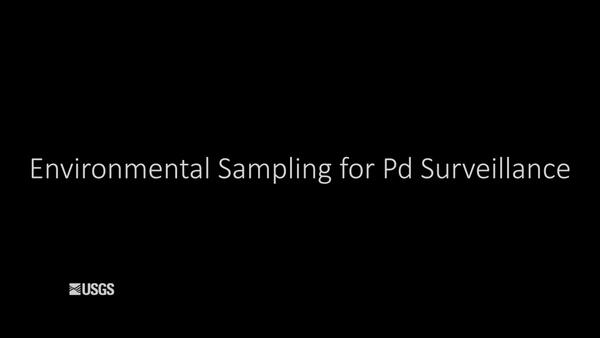 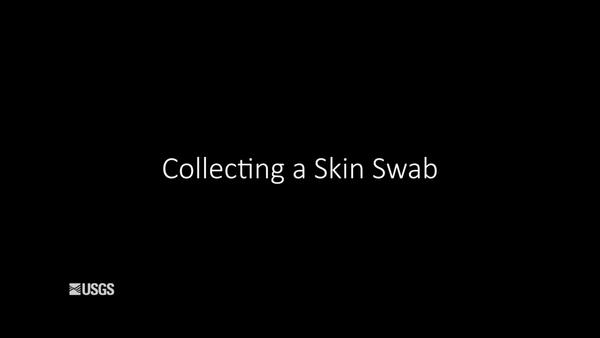 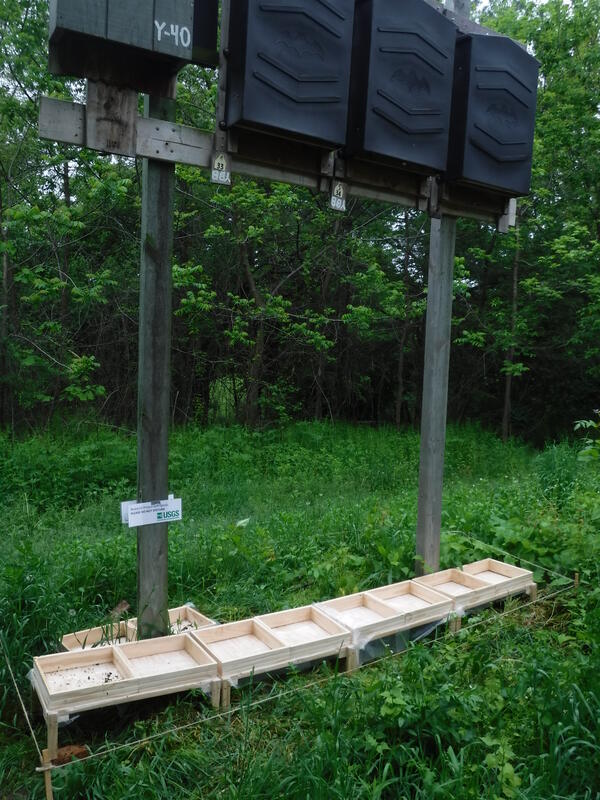 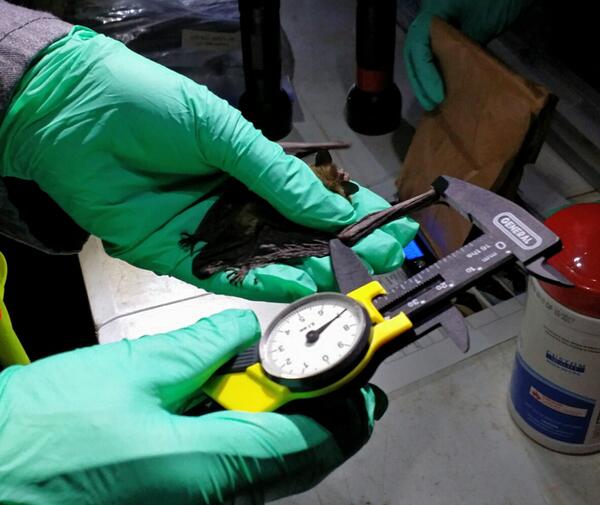 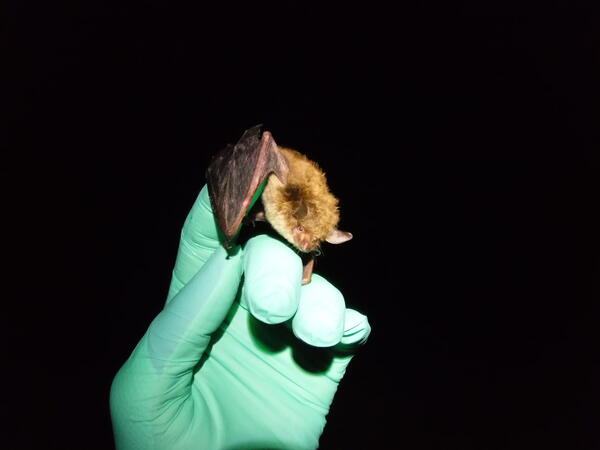 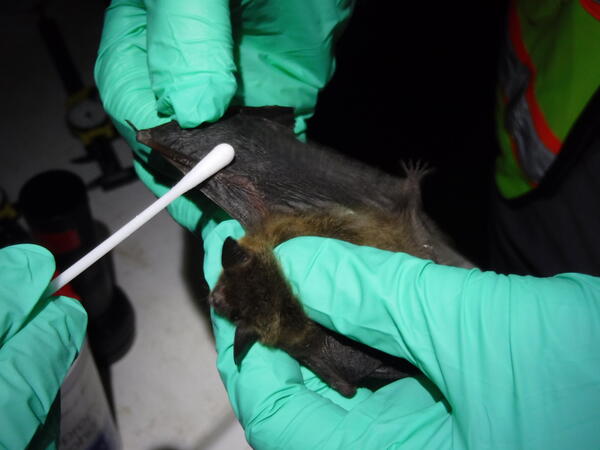 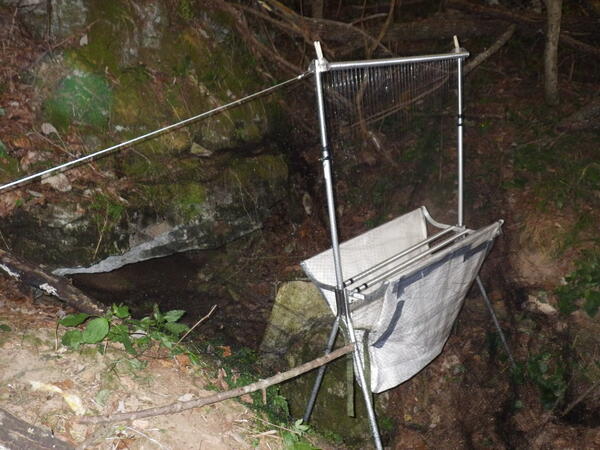 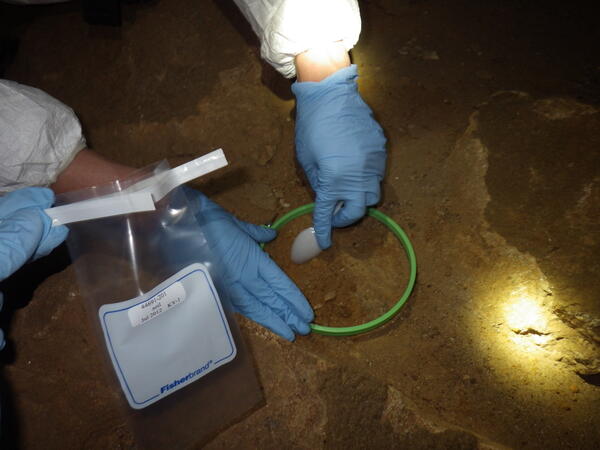 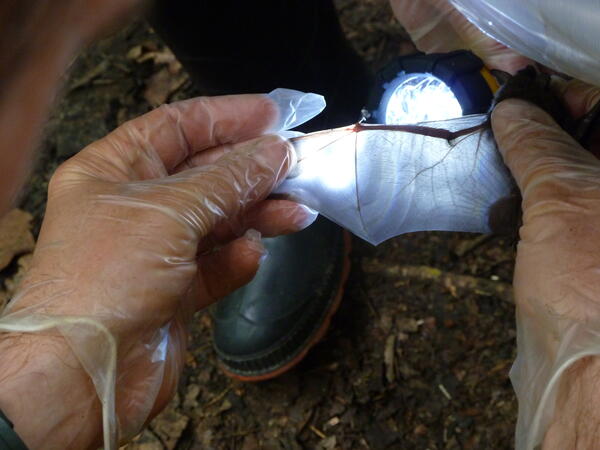 Below are publications about white-nose syndrome.

Determinants of Pseudogymnoascus destructans within bat hibernacula: Implications for surveillance and management of white-nose syndrome

Bats occupying hibernacula during summer are exposed to Pseudogymnoascus destructans (Pd), the causative agent of white-nose syndrome (WNS), and may contribute to its dispersal. Furthermore, equipment and clothing exposed to cave environments are a potential source for human-assisted spread of Pd. To explore dispersal hazards for Pd during the nonhibernal season, we tested samples that were collec
By
Ecosystems, National Wildlife Health Center
August 3, 2016

White-nose syndrome (WNS) is an emerging fungal disease of bats caused by Pseudogymnoascus destructans. Since it was first detected near Albany, NY, in 2006, the fungus has spread across eastern North America, killing unprecedented numbers of hibernating bats. The devastating impacts of WNS on Nearctic bat species are attributed to the likely introduction of P. destructans from Eurasia to naive ho
By
Ecosystems, National Wildlife Health Center
March 1, 2016

The continued spread of white-nose syndrome and its impacts on hibernating bat populations across North America has prompted nationwide surveillance efforts and the need for high-throughput, noninvasive diagnostic tools. Quantitative real-time polymerase chain reaction (qPCR) analysis has been increasingly used for detection of the causative fungus, Pseudogymnoascus destructans, in both bat- and e
By
Ecosystems, National Wildlife Health Center
October 24, 2012

A culture-based survey of fungi in soil from bat hibernacula in the eastern United States and its implications for detection of Geomyces destructans, the causal agent of bat white-nose syndrome

The recent emergence of white-nose syndrome (WNS), a fungal disease causing unprecedented mortality among hibernating bats of eastern North America, has revealed a knowledge gap regarding fungal communities associated with bats and their hibernacula. We used culture-based techniques to investigate the diversity of fungi in soil samples collected from 24 bat hibernacula in the eastern United States
By
Ecosystems, National Wildlife Health Center
September 13, 2012

The fungus Geomyces destructans is the causative agent of white-nose syndrome (WNS), a disease that has killed millions of North American hibernating bats. We describe a real-time TaqMan PCR test that detects DNA from G. destructans by targeting a portion of the multicopy intergenic spacer region of the rRNA gene complex. The test is highly sensitive, consistently detecting as little as 3.3 fg of
By
Ecosystems, National Wildlife Health Center
February 26, 2012

White-nose syndrome (WNS) is an emerging disease causing unprecedented morbidity and mortality among bats in eastern North America. The disease is characterized by cutaneous infection of hibernating bats by the psychrophilic fungus Geomyces destructans. Detection of G. destructans in environments occupied by bats will be critical for WNS surveillance, management and characterization of the fungal
By
Ecosystems, National Wildlife Health Center

Below are news stories about white-nose syndrome.

Updates on white-nose syndrome surveillance and research from the USGS National Wildlife Health Center in Fall 2019.

The cold-loving fungus (Pseudogymnoascus destructans, or Pd) that causes white-nose syndrome, a disease that has killed millions of North American...