A prime suspect has been identified as a probable cause of the "Sea Star Wasting Disease," a mysterious epidemic that has been killing these animals in droves along the U.S. and Canadian Pacific Coast. Researchers from Cornell University, the U.S. Geological Survey (USGS), and other institutions published their findings on this "sea star associated densovirus (SSaDV)" in the December 2014 issue of the Proceedings of the National Academy of Sciences (PNAS).

The sea star mortality was so sudden and unprecedented that biologists were unprepared and short on resources, says coauthor Kevin Lafferty, a USGS parasite specialist who led the statistical analysis for the new study. "Lots of people were scrambling to learn what was going on. Ian Hewson at Cornell started having interesting findings with densovirus, so he and Drew Harvell [Cornell] helped pull together a team of interested scientists to contribute to the effort."

Sea star die-offs have been observed in past decades, but none were at this geographic scale. Since June 2013, Sea Star Wasting Disease cases have been reported from Baja California all the way to southern Alaska. As many as 20 sea star species have been affected.

To pinpoint the suspected biological agent, Cornell researchers devised a laboratory experiment using sunflower sea stars (Pycnopodia helianthoides) that showed symptoms of Sea Star Wasting Disease. Tissue samples were removed from sick animals, minced and blended in seawater. This slurry was then passed through super-fine filters designed to remove debris and bacteria but allow smaller particles —including viruses—to pass through.

SSaDV, along with a sea urchin virus from Hawaii that Hewson's team recently identified, are the first-ever viruses identified in echinoderms. Intriguingly, populations of collector urchins (Tripneustes gratilla) in Hawaii have also had unusual mortality in the past year.

Researchers have detected genome sequences of SSaDV in sea star specimens from the 1940s, suggesting that the virus has been prevalent in the ecosystem all this time, adding to the mystery of the current epidemic. More research is needed to understand the disease ecology of this agent in its marine host and how the deaths of millions of sea stars will change their local food webs.

Harvell was supported by a National Science Foundation grant for a Research Coordination Network for the Ecology of Marine Infectious Disease, while Hewson received rapid response funds from Cornell University's Atkinson Center for a Sustainable Future. This research was funded by the USGS Ecosystems Mission Area’s Environmental Health Program (Contaminant Biology and Toxic Substances Hydrology) and Lafferty received fundng from the USGS Wildlife: Terrestrial and Endangered Resources Program. 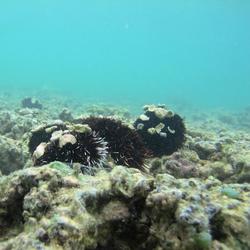 Scientists from the U.S. Geological Survey (USGS), University of Hawaii, the State of Hawaii Division of Aquatic Resources, and The Nature Conservancy are investigating unusual mortality of collector urchins (Tripneustes gratilla) that has been ongoing since February 2014. As grazers, urchins play a critical role in preventing overgrowth of algae on tropical coral reefs. Awareness of the linkage...
By
Ecosystems, Contaminant Biology, Environmental Health Program, Toxic Substances Hydrology
link
September 10, 2014

Scientists from the U.S. Geological Survey (USGS), University of Hawaii, the State of Hawaii Division of Aquatic Resources, and The Nature Conservancy are investigating unusual mortality of collector urchins (Tripneustes gratilla) that has been ongoing since February 2014. As grazers, urchins play a critical role in preventing overgrowth of algae on tropical coral reefs. Awareness of the linkage...
Learn More

Below are publications associated with this featured science activity.