In a series of studies from 2010 to 2018, U.S. Geological Survey (USGS) scientists detected low levels of legacy contaminants and pharmaceuticals in osprey (Pandion haliaetus) and their food chain within the Chesapeake and Delaware River estuaries. Osprey reproductive success increased during the same period and was determined to be adequate to sustain a stable population in both estuaries.

Two of our Nation’s largest estuaries—Delaware Bay and Chesapeake Bay—serve as important habitat for fish and bird populations for hunting and other recreational activities. Numerous species of birds depend on the estuaries, which are part of the Atlantic flyway and are critical staging sites for a large population of fish-eating birds.

The Delaware Bay and Chesapeake Bay Estuaries are areas of historical and current contamination from agriculture, industry, and domestic wastewater sources. During the mid- to late 1900s, osprey and other fish-eating birds suffered population declines related to eggshell thinning associated with exposure to dichlorodiphenyltrichloroethane (DDT) metabolites—primarily dichlorodiphenyldichloroethylene (p,p’-DDE), and to a lesser degree polychlorinated biphenyls.

During 2010–2018, USGS scientists and other collaborators used environmental sampling and modelling approaches to determine if legacy contaminants and more contemporary contaminants, such as active pharmaceutical ingredients, are in osprey and associated food webs. Scientists also used these approaches to determine if osprey reproductive success was stable compared to previous measurements in the 1970s through the early 2000s.

Scientists reported that concentrations of legacy contaminants in osprey were lower than values measured in the 1970s through early 2000s in both estuaries, with the exception of some historically contaminated areas.

Biomagnification factors from fish to osprey eggs for p,p’-DDE and total polychlorinated biphenyls were generally similar between the two estuaries. No relation was determined between legacy contaminants with egg hatching, eggs lost from nests, nestling loss, or fledging and nesting success. Osprey eggshell thickness recovered to pre-DDT era values and osprey reproductive success increased during that same period and was
determined to be adequate to sustain a stable population in both estuaries.

Questions remain about the transfer of pharmaceuticals and other contaminants through food webs from water and sediment to fish, other fish-eating birds, and humans that consume them. Future research could focus the scope of these studies on understanding geographic locations where pharmaceuticals and other contaminants may represent the greatest exposure
potential and the greatest health risks.

This research was funded by the USGS Contaminant Biology Program, the Delaware Department of Natural Resources and Environmental Control, the Chesapeake Bay Program, and by a grant to the Texas Sea Grant College Program from the National Sea Grant Office, National Oceanic and Atmospheric Administration. 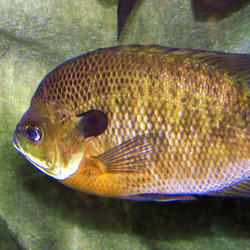 Selected Pharmaceuticals Not Likely to Persist in Wild Fish: Results of Uptake and Elimination Testing

Laboratory study shows that both uptake and elimination of selected pharmaceuticals within bluegill tissues is rapid indicating that persistence in bluegills in the environment is likely to be low except in those fish that reside downstream from a consistent, substantial, contaminant source.
By
Ecosystems, Contaminant Biology, Toxic Substances Hydrology, Environmental Health Program
link
May 30, 2018

Selected Pharmaceuticals Not Likely to Persist in Wild Fish: Results of Uptake and Elimination Testing

Laboratory study shows that both uptake and elimination of selected pharmaceuticals within bluegill tissues is rapid indicating that persistence in bluegills in the environment is likely to be low except in those fish that reside downstream from a consistent, substantial, contaminant source.
Learn More

Pharmaceuticals in water, fish and osprey nestlings in Delaware River and Bay

Exposure of wildlife to Active Pharmaceutical Ingredients (APIs) is likely to occur but studies of risk are limited. One exposure pathway that has received attention is trophic transfer of APIs in a water-fish-osprey food chain. Samples of water, fish plasma and osprey plasma were collected from Delaware River and Bay, and analyzed for 21 APIs. Only 2 of 21 analytes exceeded method detection limit
By
Ecosystems, Contaminant Biology, Eastern Ecological Science Center, Patuxent Wildlife Research Center
August 26, 2016

The osprey (Pandion haliaetus) is a well-known sentinel of environmental contamination, yet no studies have traced pharmaceuticals through the water–fish–osprey food web. A screening-level exposure assessment was used to evaluate the bioaccumulation potential of 113 pharmaceuticals and metabolites, and an artificial sweetener in this food web. Hypothetical concentrations in water reflecting “waste
By
Ecosystems, Contaminant Biology, Environmental Health Program, Eastern Ecological Science Center, Chesapeake Bay Activities, Patuxent Wildlife Research Center
June 1, 2015

The Chesapeake Bay osprey population has more than doubled in size since restrictions were placed on the production and use of DDT and other toxic organochlorine contaminants in the 1970s. Ospreys are now nesting in the most highly polluted portions of the Bay. In 2000 and 2001, contaminant exposure and reproduction were monitored in ospreys nesting in regions of concern, including Baltimore Harbo
By
Ecosystems, Eastern Ecological Science Center, Patuxent Wildlife Research Center, Chesapeake Bay Activities
June 16, 2010

Evaluation of osprey habitat suitability and interaction with contaminant exposure

Ospreys (Pandion haliaetus) have been the focus of conservation efforts since their dramatic population decline attributed to dichlorodiphenyltrichloroethane and related chemicals in the 1960s. Several recent studies of ospreys nesting in the United States have indicated improved reproduction. However, the density of breeding ospreys varies greatly among locations, with some areas seemingly habi
By
Ecosystems, Eastern Ecological Science Center, Patuxent Wildlife Research Center