Four papers by U.S. Geological Survey (USGS) scientists document tree swallow (Tachycineta bicolor) chemical exposure, physiological responses, and reproductive success in the Great Lakes region. These studies were designed to understand if there are health threats to swallows from contaminant exposure, and to provide resource managers with information about the actual as opposed to the perceived risks of exposure, which is needed to inform restoration efforts.

Contaminant (primarily polychlorinated biphenyls, polycyclic aromatic hydrocarbons, dioxins, and a variety of pesticides) occurrence in harbor and stream sediments in the industrialized portions the Great Lakes has been well documented. However, the link between the contaminants and health threats to individual organisms or entire populations is not well defined.

USGS Environmental Health Teams conducted research relevant to understand health threats to an indicator species (tree swallows—Tachycineta bicolor) in the Great Lakes Region of the United States. Tree swallows are an ideal test species because they nest throughout the region, feed locally on aerial stages of aquatic insects, and as a result have close ties to sediment contamination. This research was done in partnership with Great Lakes Restoration Initiative.

The Initiative began in 2010 with a renewed effort to assess and restore, where needed, contaminated harbors and rivers across the Great Lakes at 31 specific Areas of Concern (AOCs). AOCs, designated under the Canada Great Lakes Water Quality Agreement, include watersheds or portions of watersheds that exhibit conditions sufficient to cause any of 14 specific impairments of beneficial use. The ultimate goal is restoration of the AOCs to a level similar to surrounding non-AOCs so they can be delisted.

The results from a series of USGS studies during 2010-2014 are documented in four papers outlining contaminants in birds and their eggs, biomarkers of contaminant exposure (ethoxyresorufin-O-dealkylase (EROD) activity, chromosomal damage, and six measures of oxidative stress), and reproductive success. Results indicate that adverse effects were restricted to relatively few birds at a few sites in the Great Lakes region.

While this research was done at AOCs in the Great Lakes, the reproductive and physiological responses deduced from this study are applicable to other contaminated locations throughout the Nation.

This study is part of the science done by Environmental Health Mission Area Programs to provide answers to questions about the actual risk, not the perceived risk, of contaminants and pathogens in the environment.

This study was supported by the Great Lakes Restoration Initiative (GLRI) and the USGS Contaminant Biology Program.

Below is the science team associated with this work. 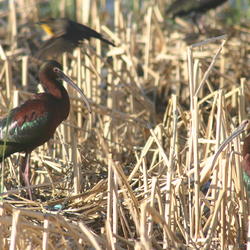 The Ecologically-Driven Exposure pathways team identifies internal and external pathways and processes that can alter exposure and toxicity of contaminants and pathogens to wildlife the environment. That information is used to distinguish actual health risks to fish and wildlife. If actual risks are identified this project will inform how to economically and effectively minimize risk by providing...
By
Ecosystems, Contaminant Biology, Environmental Health Program
link
July 12, 2021

The Ecologically-Driven Exposure pathways team identifies internal and external pathways and processes that can alter exposure and toxicity of contaminants and pathogens to wildlife the environment. That information is used to distinguish actual health risks to fish and wildlife. If actual risks are identified this project will inform how to economically and effectively minimize risk by providing...
Learn More

Tree swallows, Tachycineta bicolor, were sampled across the Great Lakes basin in 2010 through 2015 to provide a system-wide assessment of current exposure to organic contaminants. The results provide information identified as critical by regulators to assess the “bird or animal deformity or reproductive problems” beneficial use impairment. Eggs were collected from 69 sites across all 5 Great Lakes
By
Ecosystems, Contaminant Biology, Environmental Health Program, National Wildlife Health Center, Upper Midwest Environmental Sciences Center