Salt marshes are sites of silica (SiO2) cycling and export to adjacent coastal systems, where silica availability can exert an important control over coastal marine primary productivity. Mineral weathering and biologic fixation concentrate silica in these systems; however, the relative contributions of geologic versus biogenic silica dissolution to this export are not known. We collected water samples from the tidal creek of a relatively undisturbed New England (USA) salt marsh over 13 tidal cycles in spring, summer, and fall 2014–2016 to determine patterns of dissolved silica (DSi) concentration in the water entering and leaving the marsh. DSi concentrations in the tidal creek peaked in the summer and were at a minimum in the fall. Additionally, we analyzed DSi concentrations and Ge/Si ratios in marsh porewater and groundwater samples as a tracer of DSi origin. Ge/Si ratios in the porewater, subterranean estuary, and fresh groundwater averaged 6.3 ± 0.31 µmol/mol, which is consistent with production via silicate weathering rather than biogenic silica dissolution. These results highlight a previously unstudied role marsh sediment plays in coastal biogeochemistry by supplying DSi to coastal ecosystems. This marsh exported 1170 mmol DSi m−2 year−1, 85% of which originated from porewater exchange, with minor contributions from brackish groundwater discharge from the subterranean estuary. Examining these values in the context of the other known DSi inputs indicates that coastal marshes provide ~ 75% of the annual silica inputs into the adjacent estuary, Waquoit Bay. 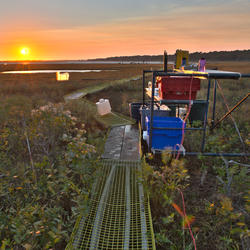 Coastal Environmental Geochemistry research at the Woods Hole Coastal and Marine Science Center spans multiple ecosystems and topics, including coastal wetlands, aquifers, and estuaries, with the goal of providing data and guidance to federal, state, local, and private land owners and managers on these vital ecosystems.
Learn More