The Channeled Scabland of eastern Washington State, USA, brought megafloods to the scientific forefront. A 30,000-km2 landscape of coulees and cataracts carved into the region’s loess-covered basalt attests to overwhelming volumes of energetic water. The scarred landscape, garnished by huge boulder bars and far-travelled ice-rafted erratics, spurred J Harlen Bretz’s vigorously disputed flood hypothesis in the 1920s. First known as the Spokane flood, it was rebranded the Missoula flood once understood that the water came from glacial Lake Missoula, formed when the Purcell Trench lobe of the last-glacial Cordilleran ice sheet dammed the Clark Fork valley in northwestern Idaho with ice a kilometer thick. Bretz’s flood evidence in the once-remote Channeled Scabland, widely seen and elaborated by the 1950s, eventually swayed consensus for cataclysmic flooding. Missoula flood questions then turned to some that continue today: how many? when? how big? what routes? what processes?

The Missoula floods passed through eastern Washington by a multitude of valleys, coulees and scabland tracts, some contemporaneously, some sequentially. Which routings and their timing depended on the positions of various lobes of the multi-pronged Cordilleran ice sheet and the erosional development of the channels themselves. The first floods mostly followed the big bend of Columbia valley looping through north-central Washington. But the south-advancing Okanogan ice lobe soon blocked that path, forming long-lasting glacial Lake Columbia in the impounded Columbia valley. Missoula floods into this lake were diverted south out of the Columbia valley and into eastern Washington coulees and scabland tracts. At least four floods entered Moses Coulee, but then as the Okanogan lobe advanced over and blocked the head of that coulee, more eastern paths took the water, including Grand Coulee and the Telford-Crab-Creek and Cheney-Palouse scabland tracts. Flood routing also depended on the erosion of the coulees. At some point, headward erosion of upper Grand Coulee lowered the divide saddle between the west-running Columbia valley and the deep and wide Grand Coulee heading southwest. Still uncertain is when this happened and the consequences with respect to the stage and extent of glacial Lake Columbia and to flood access to the other, higher, flood routes. Downstream, all flood routes converged onto Pasco Basin, flowed through Wallula Gap and the Columbia River Gorge into the Pacific Ocean, following submarine canyons and depositing sediment layers on abyssal plains.

Stratigraphic studies indicate dozens—likely more than a hundred—separate Missoula floods during the last glacial period. Over the length of the flood route, backwater areas and depositional basins preserve multiple flood beds, many of which are separated by signs of time, including volcanic ash layers and soil development in subaerial environments; and varve-like beds and pelagic mud layers in lacustrine and marine settings. Evidence also comes from the glacial Lake Missoula basin, where stratigraphy indicates dozens of filling and emptying cycles. Varve counts in conjunction of radiocarbon dating and paleomagnetic secular variation show the repeated filling-and-release cycles of glacial Lake Missoula had intervals possibly as long as 100 years early in the lake’s history but diminished to just one or two years for the last few floods. This behavior accords with jökulhlaup-style floods released by subglacial drainage from a self-dumping ice-dammed lake. But not yet clear is whether such a mechanism applies to all the floods or if some emptied more cataclysmically as hypothesized by some.

Radiocarbon dating of sparse organic materials remains key to defining flood chronology but has been lately bolstered by analyses of terrestrial cosmogenic nuclides and optically stimulated luminescence. Varve counts and paleomagnetic secular variation studies help to define durations and intervals represented by sequences of flood beds. The ~16 ka Mount St. Helens Set S tephra is commonly interbedded within flood deposits, enabling correlation of deposits among sites. Tephra from the 13.7–13.4 ka eruption of Glacier Peak overlies all glacial Lake Missoula and Missoula flood deposits, defining an end time. Overall conclusions are that glacial Lake Missoula was extant and producing floods for at least 3–4 ky during 20–14 ka. At least ~75 floods preceded Mount St Helens Set S, followed by 30 or more after the tephra fall. Most floods entered glacial Lake Columbia, impounded by the Okanogan lobe, for 2–5 ky between about 18.5 and 15 ka. Glacial Lake Columbia outlived Lake Missoula by >200–400 yr but may have been born later since at least one flood came down the Columbia valley before the Okanogan ice lobe blocked the Columbia valley at 18.5–18 ka. The maximum extent of the Okanogan and Purcell Trench lobes, many Missoula floods, substantial erosion of upper Grand Coulee, and the widespread tephra falls from Mount St. Helens eruptions all happened about 17–15 ka. People, in the area since 16.6–15.3 ka, almost certainly witnessed the last of the Missoula floods and later large floods from other ice-dammed lakes in the Columbia River basin.

Quantitative flow analyses give peak discharge estimates and support understanding of erosional and depositional processes. The first flow assessments were simple cross-section calculations but recent assessments employ two-dimensional hydrodynamic models. The general finding is that emplacement of the maximum stage evidence requires about 20 million m3/s near the Lake Missoula outlet and about 5–15 million m3/s through Wallula Gap and downstream in the Columbia River Gorge. These hydraulic analyses raise still-unresolved questions regarding canyon erosion and possible additional water sources.

The large Pleistocene Bonneville flood entered the Columbia River system from the southeast from pluvial Lake Bonneville, the Pleistocene predecessor to Great Salt Lake in the eastern Great Basin. During the last glacial, the lake basin filled, covering >50,000 km2 with 10,400 km3 of water before reaching its maximum possible stage governed by Red Rock Pass, the lowest divide separating the basin from the Snake River basin to the north. The overtopping lake rapidly incised 108–125 m into the Red Rock Pass outlet, spilling half of its total lake volume. G.K. Gilbert described the essential sequence in the 1870s, but the flood was mostly forgotten until the late 1950s when Harold Malde linked the spectacular scabland topography and bouldery “melon gravel” on the Snake River Plain to the Lake Bonneville overflow. The Bonneville flood appears to have been a singular event at about 18 ka. No evidence of multiple or pre-last-glacial spillovers has yet been found. Its total volume was about twice that of a maximum Lake Missoula flood yet its peak discharge was ~1 million m3/s, less than a tenth of the largest Missoula floods. Its comparatively simple flow path and much steadier flow make the Bonneville flood ideal for new studies of erosional and depositional processes.

At least two floods seem to have passed down the Columbia valley after the last of the Missoula floods, including a large flood about ~14 ka likely from cataclysmic demise of the thinning Okanogan ice lobe dam impounding glacial Lake Columbia. Floods from earlier glacial ages left scant yet clear evidence in the Channeled Scabland and Columbia valley. But their source, timing, and magnitudes are little understood. Some deposits are paleomagnetically reversed, thus older than ~800 ka. Last-glacial floods and perhaps older ones affected the Snake River Plain, some likely sourced in lakes dammed by alpine glaciers in central Idaho. 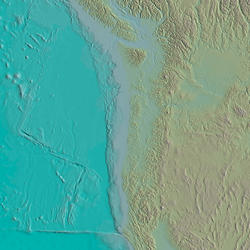 The Pacific Northwest is an area created by active and complex geological processes. On its path to the Pacific Ocean, the Columbia River slices through a chain of active volcanoes located along the western margin of the U.S. in Washington, Oregon, and northern California. These volcanoes rest above the active Cascadia subduction zone, which is the boundary where the oceanic tectonic plate dives...
By
National Cooperative Geologic Mapping Program, Earthquake Science Center, Geology, Minerals, Energy, and Geophysics Science Center, Oregon Water Science Center, Washington Water Science Center, Western Fisheries Research Center
link
March 30, 2021

The Pacific Northwest is an area created by active and complex geological processes. On its path to the Pacific Ocean, the Columbia River slices through a chain of active volcanoes located along the western margin of the U.S. in Washington, Oregon, and northern California. These volcanoes rest above the active Cascadia subduction zone, which is the boundary where the oceanic tectonic plate dives...
Learn More