Ranking Features Based on Magnitude of Change Active

Each of the polygons in the topographic change inventory has numerous attributes associated with it. These attributes allow a ranking of features based on the magnitude of change, as measured by polygon descriptors (area and volume) and changes in terrain parameters (elevation, relief, slope, aspect). The ability to do such a ranking points out one of the advantages of producing spatially explicit change maps from geospatial data over broad areas: the effects of changes at specific locations can be quantified. The examples given below are the largest changes as defined by several attributes.

The existence of these topographic change features is well documented and they are likely well known to communities in their vicinity, so their delineation is not new information. What is new information, perhaps, is their ranking compared to other similar features across the United States. Viewing of these examples is also useful for learning about the performance and results of the topographic change detection process developed and applied in this study.

The following figures present the individual topographic change polygons that are top ranked in terms of one or more parameters. Not surprisingly, each of these features is associated with large surface mining operations.

In the next five images, it is clear that some of the features represent an expansion of the mining activity that was already evident when the source data for the NED were collected. In these cases, the changes in elevation resulting from continued earth moving were enough to be detected as significant surface transformations, even when the area was already in a disturbed condition.

By assigning quantitative attributes to individual change features based on the elevation and difference datasets, comparisons can be made with other well-known features. The alteration to Mount St. Helens as a result of its 1980 eruption is often cited as an example of topographic change, a catastrophic natural transformation in this case. After the eruption, the USGS constructed a new DEM that, when paired with the DEM representing pre-eruption conditions, shows the value of multitemporal elevation data.

Geomorphic events with a magnitude like that of Mount St. Helens are rare, at least within a human lifetime, thus they attain much notoriety. As such, they are often used to give context to other similar phenomena. The total volume of material displaced as calculated in this study (4.33 x 1010 cubic meters) equates to more than 15 times the volume moved in the Mount St. Helens eruption. As a side note, even though the largest man-made geomorphic feature (Bingham Canyon mine) detected in this study equates to less than half the amount of material moved in the 1980 Mount St. Helens eruption, it contributes nearly 3 percent of the total volume of materials moved as calculated in this study. Given the fact that the Bingham Canyon mine is just one of 5,263 features in the topographic change inventory, that percentage is quite significant. 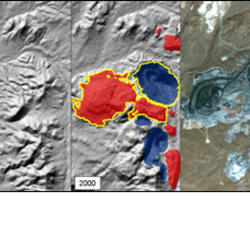 The USGS has developed a national inventory of significant topographic changes based on seamless multitemporal elevation data and land cover data. The National Elevation Dataset (NED) and the Shuttle Radar Topography Mission (SRTM) data form a unique pair of seamless elevation datasets that can be used to detect and analyze 20th century topographic surface changes in the United States.
Learn More
link

The USGS has developed a national inventory of significant topographic changes based on seamless multitemporal elevation data and land cover data. The National Elevation Dataset (NED) and the Shuttle Radar Topography Mission (SRTM) data form a unique pair of seamless elevation datasets that can be used to detect and analyze 20th century topographic surface changes in the United States.
Learn More