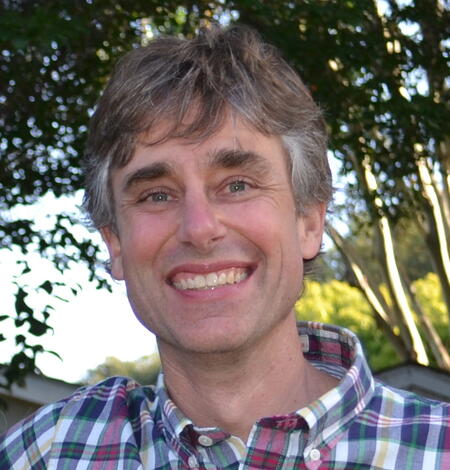 As Scientist-in-Charge of the California Volcano Observatory (CalVO), I lead the ~35 geologists, geophysicists and hydrologists that study and monitor volcanoes in California and other domestic and international volcanoes.  CalVO also maintains laboratories to study many aspects of volcanic behavior.  CalVO is located in Menlo Park and Moffett Field on the San Francisco Peninsula.

Eruptive history of Cascade and Aleutian Arc Volcanoes, an example from the Three Sisters

Despite being some of the best-studied volcanoes on earth, little was known about the inception ages and lifespans of Hawaiian volcanoes, largely because early-erupted samples are inaccessible and all samples are difficult to date accurately and precisely. The chemical progression from alkalic to tholeiitic and back to alkalic compositions is well-characterized, yet the timescales of this variation have been difficult to constrain. Even volume estimates vary significantly because a new edifice may develop on the flank of an older shield.  A collaborative agreement between USGS and the Japan Agency for Marine-Earth Science and Technology (JAMSTEC) provided submersible access to early-erupted materials and a unique opportunity to constrain inception ages and compositional evolution rates of the most productive volcanic center on earth.

We undertook to date submarine samples from the south flank of Kilauea, Mahukona and Hilo Ridge to develop a basic framework for the time-volume development of Hawaiian volcanoes. Lavas from an intact section of weakly alkalic basalts on submarine flank of Kilauea and strongly alkalic blocks from debris flows beneath Kilauea are indistinguishable at 147±14 ka and older strongly alkalic samples range from 212±38 ka to 280±20 ka (Calvert and Lanphere, 2006).  This finding shows that Kilauea is a relatively young volcano and the voluminous younger, tholeiitic lavas were erupted at higher rates than generally assumed.  This work refutes previous studies dating the tholeiitic lavas at 500 ka along the active rift zone and in drill core. Weakly-alkalic rocks from Hilo Ridge yielded 1150±20 ka ages, far too old to belong to their assumed source, Mauna Kea.  Hilo Ridge instead belongs to Kohala volcano, which is now estimated to have erupted from 1,200 to 280 ka (Lipman and Calvert, 2011).  Mauna Kea had been reported to be more voluminous than other centers on Hawaii, however, this result requires that the submarine Hilo Ridge belongs to Kohala, not Mauna Kea, reducing the estimated eruptive volume of Mauna Kea by nearly 50% (42 to 22 km3) a

Trachyandesite of Kennedy Table, its vent complex, and post−9.3 Ma uplift of the central Sierra Nevada

Tectonic interpretation of the central Sierra Nevada—whether the crest of the Sierra Nevada (California, USA) was uplifted in the late Cenozoic or whether the range has undergone continuous down-wearing since the Late Cretaceous—is controversial, since there is no obvious tectonic explanation for renewed uplift. The strongest direct evidence for late Cenozoic uplift of the central Sierra Nevada co
By
Volcano Hazards, Volcano Science Center
August 19, 2020

The 40Ar/39Ar dating method is among the most versatile of geochronometers, having the potential to date a broad variety of K-bearing materials spanning from the time of Earth’s formation into the historical realm. Measurements using modern noble-gas mass spectrometers are now producing 40Ar/39Ar dates with analytical uncertainties of ∼0.1%, thereby providing precise time constraints for a wide ra
By
Volcano Hazards, Volcano Science Center, Geology, Geophysics, and Geochemistry Science Center, Geology, Minerals, Energy, and Geophysics Science Center
October 19, 2019

Strike-slip faults commonly include extensional and contractional bends and stepovers, whereas rotational stepovers are less common. The Volcanic Tableland, Black Mountain, and River Spring areas (California and Nevada, USA) (hereafter referred to as the VBR region) straddle the transition from the dominantly NW-striking dextral faults that define the northwestern part of the eastern California sh
By
Volcano Hazards, Volcano Science Center
October 19, 2019

The age and style of opening of the Havre Trough back-arc system is uncertain due to a lack of geochronologic constraints for the region. 40Ar/39Ar dating of 19 volcanic rocks from across the southern Havre Trough and Kermadec Arc was conducted in three laboratories to provide age constraints on the system. The results are integrated and interpreted as suggesting that this subduction system is you
By
Volcano Hazards, Volcano Science Center
October 19, 2019

Monogenetic volcanoes, distributed over large areas, contribute to the growth of monogenetic volcanic fields (MVFs) over thousands to millions of years of activity. It is now accepted that MVFs are also temporally clustered. To reduce uncertainties inherent to this episodic character, it is critical to combine multi-disciplinary studies to improve our knowledge of the temporal evolution of MVFs. T
By
Volcano Hazards, Volcano Science Center
May 21, 2019

Radiometric ages of volcanic rocks on the fort rock dome and in the aquarius mountains, Yavapai and Mohave Counties, Arizona

The Fort Rock dome, in Yavapai County, Ariz., is a roughly circular geologic structure in plan view, 2.5 km in diameter, that is similar in many ways to an impact crater; however, it is a structural dome caused by a potassic mafic intrusion at depth, and the crater-like depression in its center is erosional in origin. The Aquarius Mountains, west of the Fort Rock dome, in Mohave County, contain a
By
Natural Hazards, Earthquake Hazards, Earthquake Science Center
April 26, 2019

Age of the dacite of Sunset Amphitheater, a voluminous Pleistocene tephra from Mount Rainier (USA), and implications for Cascade glacial stratigraphy

Frequency of volcanic eruptions in the Mammoth Lakes Sierra

Geologists recognize lavas and ash deposits from about 60 past eruptions in the area around Mammoth Mountain and Devils Postpile, California. This raises the unanswerable question, “When will it erupt again?” An alternative, answerable, and informative question is, “How often has it erupted?”In the Mammoth Lakes Sierra, geologists have mapped in great detail all the lavas and ash deposits produced
By
Volcano Hazards, Volcano Science Center
August 2, 2018

Timescales of magmatic differentiation from alkali basalt to trachyte within the Harrat Rahat volcanic field, Kingdom of Saudi Arabia

A fundamental goal of igneous petrology is to quantify the duration of time required to produce evolved magmas following influx of basalt into the crust. However, in many cases, complex field relations and/or the presence of a long-lived magmatic system make it difficult to assess how basaltic inputs relate to more evolved magmas, therefore, precluding calculation of meaningful timescales. Here, w
By
Volcano Hazards, Volcano Science Center
February 9, 2018

In the northwestern Lake Tahoe Basin, Pleistocene basaltic and trachyandesitic lavas form a small volcanic field comprising ∼1 km3 of lava that erupted from seven vents. Most of these lavas erupted subaerially and produced lava flows. However, where they flowed into an early Lake Tahoe (Proto-Tahoe), they produced deltas consisting of hydrovolcanic breccias as well as pillow lavas draped downslope
By
Volcano Hazards, Volcano Science Center
link
November 4, 2019