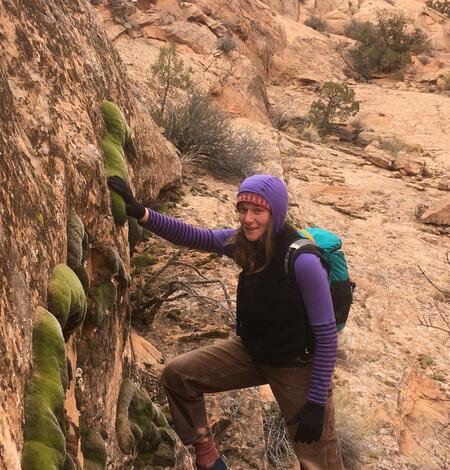 Cara was introduced to scientific research as an undergraduate in Geology at the College of Charleston. She lead topographic surveys along barrier islands of the eastern US coastline to examine connections between beach erosion and coastal development. While earning her masters at the University of Colorado at Boulder, Cara was introducted to biogeochemistry and learned how to use stable carbon isotope ratios to investigate how climate and topography influence soil carbon cycling for paleoclimate and paleo-vegetation reconstructions. Cara has worked with multiple federal agencies and federally funded projects including the Ohio Environmental Protection Agency, South Carolina Department of Natural Resources, and the Niwot Ridge Long Term Ecological Research site. Cara and USGS scientist Sasha Reed work together closely on a range of projects, including those that improve our understanding of carbon cycling in western drylands, of the challenges and management options associated with invasive species, of fire effects on desert plants and soils, and of how drought and disturbance interact to regulate plant productivity, biocrust community composition, and soil stability. Most recently, she has been exploring carbon dioxide exchange in epilithic lichen and mosses.

Masters of Science in Environmental Studies, the University of Colorado at Boulder (August 2015-December 2017)

Global concerns for desertification have focused on the slow recovery of extensive and expanding drylands following disturbance, which may be exacerbated by climate change. Biological soil crusts (biocrusts) are photosynthetic soil communities found in drylands worldwide, which are central to the stability and resilience of dryland ecosystems, but vulnerable to global change. Here we use multiple
By
Ecosystems, Southwest Biological Science Center
December 14, 2021

These data were compiled to examine how climate change affects biocrust recovery from both physical and climate-induced disturbance. Objective(s) of our study were to uncover the trajectory of biological soil crust communities and soil stability following distrubance and under warming. These data represent biological soil crust surveys under 5 treatments at three sites. These data were collected a
By
Southwest Biological Science Center