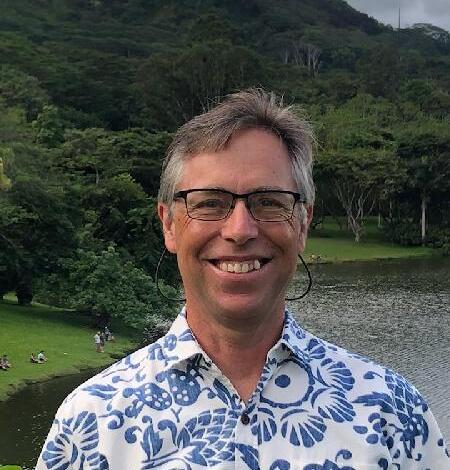 John Hoffmann is the Director of the Pacific Islands Water Science Center in Honolulu, Hawaiʻi.

John Hoffmann joined the USGS in 1984 as a geologist at the Hawaiian Volcano Observatory to help monitor Kīlauea Volcano on Hawaiʻi Island. Following graduate school in Honolulu, John joined the Pacific Islands Water Science Center in 1988, where he worked on groundwater issues in Hawaiʻi and Micronesia. By 1995, John transferred to the USGS Arizona Water Science Center where he served many roles, including six years as Center Director. From 2013 to 2020 John held several positions with the USGS Water Mission Area in Reston, Virginia. His interests are in groundwater availability, groundwater/surface-water interaction, and the application of geophysical methods for hydrological studies. John earned a Bachelor’s degree in Geology from Michigan Technological University and a Master’s degree in Geology and Geophysics from the University of Hawaiʻi at Mānoa.

A large fraction of ground water stored in the alluvial aquifers in the Southwest is recharged by water that percolates through ephemeral stream-channel deposits. The amount of water currently recharging many of these aquifers is insufficient to meet current and future demands. Improving the understanding of streambed infiltration and the subsequent redistribution of water within the unsaturated z
By
Water Resources, Arizona Water Science Center
May 1, 2008

Ground-water recharge in the arid and semiarid southwestern United States

The upper and middle Verde River watersheds in central Arizona are primarily in Yavapai County, which in 1999 was determined to be the fastest growing rural county in the United States; by 2050 the population is projected to more than double its current size (132,000 in 2000). This study combines climatic, surface-water, ground-water, water-chemistry, and geologic data to describe the hydrogeologi
By
Water Resources, Arizona Water Science Center
January 23, 2006

Geologic, hydrologic, and chemical data from the C aquifer near Leupp, Arizona

Stream temperature has long been recognized as an important water quality parameter. Temperature plays a key role in the health of a stream’s aquatic life, both in the water column and in the benthic habitat of streambed sediments. Many fish are sensitive to temperature. For example, anadromous salmon require specific temperature ranges to successfully develop, migrate, and spawn [see Halupka and
By
Water Resources, Ecosystems, Toxic Substances Hydrology, Environmental Health Program
April 1, 2002

Characteristics of the stream-channel and basin-fill deposits beneath a 12-mile reach of Rillito Creek, Pima County, Arizona, were obtained to describe the geohydrologic system. The findings presented here are part of a larger project to improve the understanding of recharge processes beneath ephemeral streams. The stream-channel deposits, which range in thickness from 15 to 40 feet, generally ar
December 1, 2001

Increased agricultural and recreational activities and recent growth of population centers within the Verde River basin have led to concerns about the quality and quantity of water flowing onto the Fort McDowell Indian Reservation. The purpose of this study was to determine the quality and quantity of water in the Verde River and in the shallow stream-channel deposits in the vicinity of the northe
September 1, 2001

Grande Wash is a tributary of the Verde River and drains an area of 13 square miles within the McDowell Mountains and the Town of Fountain Hills in Central Arizona. The wash enters the Fort McDowell Indian Reservation at the eastern boundary of Fountain Hills and is incised in coarse-grained alluvium that is contiguous with the alluvial aquifer along the Verde River. The aquifer is used by the For
September 1, 2000

The Navajo Nation and Hopi Tribe of the Black Mesa area, Arizona, depend on ground water from the N aquifer to meet most tribal and industrial needs. Increasing use of this aquifer is creating concerns about possible adverse effects of increased ground-water withdrawals on the water resources of the region. A thorough understanding of the N aquifer is necessary to assess the aquifer's response to
By
Arizona Water Science Center