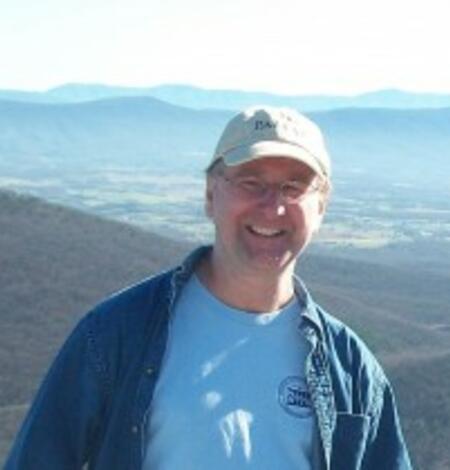 After being the recent Acting Director position for the Office of Science Quality and Integrity (OSQI), Randall C. Orndorff will be returning to his position as a research geologist for the Florence Bascom Geoscience Center.

Randall is a geologic mapper and karst specialist for the Florence Bascom Geoscience Center in Reston, VA.  His current projects include geologic mapping a karst research in the Shenandoah Valley of Virginia, Greenbrier Valley of West Virginia, and the souther Lake Champlain region of New York and Vermont.  As the Acting Director for the Office of Science Quality and Integrity from May 2016 to January 2017, Randall was tasked with monitoring and enhancing the integrity, quality, and health of United States Geological Survey science through executive oversight and development of strong practices, policy, and supporting programs listed below. Prior to Acting Director of OSQI, Randall was the Director of the Eastern Geology and Paleoclimate Science Center (2010-2016). In this role, he was responsible for overseeing geologic mapping and paleoclimate studies in the eastern United States as well as karst, landslide, and earthquake hazards.  From 2002 to 2010, he was Associate Program Coordinator for the National Cooperative Geologic Mapping Program. With more than 30 years at the USGS as a scientist, program coordinator, and science center director, he has brought a wealth of knowledge to his leadership roles. 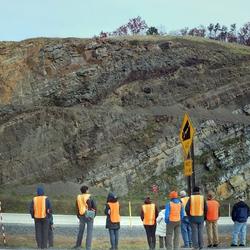 The Appalachian Basin Geologic Mapping Project performs geologic mapping at local and regional scales, and geologic research in The Valley and Ridge and Appalachian Plateaus physiographic provinces. These provinces include parts of 11 states and mainly borders the Blue Ridge / Piedmont and North Interior Lowlands Provinces. Two states have Valley and Ridge geology only (GA, NJ), two have...
Learn More
February 5, 2015

This map covers the drainage basins of the upper Current River and the Eleven Point River in the Ozark Plateaus physiographic province of southeastern Missouri. The two surface drainage basins are contiguous in their headwaters regions, but are separated in their lower reaches by the lower Black River basin in the southeast corner of the map area. Numerous dye-trace studies demonstrate that in the
By
Florence Bascom Geoscience Center
July 7, 2013

Geologic Map of the Round Spring Quadrangle, Shannon County, Missouri

The Round Spring 7.5-minute quadrangle is located in Shannon County, south-central Missouri on the Salem Plateau of the Ozark Plateaus physiographic province. As much as 1,350 feet (ft) of flat-lying to gently dipping Upper Cambrian and Lower Ordovician rocks, mostly dolomite, overlie Mesoproterozoic volcanic rocks. The bedrock is overlain by unconsolidated residuum, colluvium, terrace deposits, a
April 15, 2008

The Frederick 30? ? 60? quadrangle lies within the Potomac River watershed of the Chesapeake Bay drainage basin. The map area covers parts of Montgomery, Howard, Carroll, Frederick, and Washington Counties in Maryland; Loudoun, Clarke, and Fairfax Counties in Virginia; and Jefferson and Berkeley Counties in West Virginia. Many geologic features (such as faults and folds) are named for geographic f
August 31, 2004

The bedrock exposed in the Fremont Quadrangle, Missouri, comprises Early Ordovician aged dolomite, sandstone, and chert. The sedimentary rocks are nearly flat-lying except where they are adjacent to faults. The carbonate rocks are karstified and the area contains numerous sinkholes, springs, caves, and losing-streams. This map is one of several being produced under the U.S. Geological Survey N
February 28, 2003

The bedrock exposed in the Stegall Mountain Quadrangle, Missouri, comprises Mesoproterozoic aged volcanic rocks overlain by Late Cambrian and Early Ordovician aged dolomite, sandstone, and chert. The sedimentary rocks are nearly flat-lying except where they drape around knobs of the volcanic rocks or where they are adjacent to faults. The carbonates are karstified and the area contains numero
Filter Total Items: 35
October 1, 2020

Jack Burton Epstein, a career geologist with the U.S. Geological Survey (USGS) passed away in May 2020 at his home in Great Falls, Virginia. His career and contributions to the USGS spanned more than 60 years from his time as a summer field assistant while attending college, through 40 years as a research geologist, and more than 15 years as an emeritus scientist. Jack was born December 27, 1935
By
Florence Bascom Geoscience Center
October 1, 2019

The Value of Data – The Qatar Geologic Mapping Project

The State of Qatar is in a period of rapid development, modernization, and population growth. One of the most important factors influencing the long-term success and sustainability of future development is a comprehensive understanding of the region’s geologic regime, geotechnical conditions, natural resources, and environmental constraints. To obtain this understanding, the Ministry of Municipal
By
Florence Bascom Geoscience Center
September 2, 2018

This map of the Timberville 7.5-minute quadrangle in Rockingham and Shenandoah counties, Virginia shows the distribution of Paleozoic-age sedimentary rocks in map and cross-section. Surficial deposits including alluvium and colluvium are also shown. The characteristics of each map unit are described and a brief report discusses the stratigraphy, structure and mineral resources of the area.
By
Florence Bascom Geoscience Center
April 3, 2017

The geology of the Ozark National Scenic Riverways (ONSR) in southern Missouri has been mapped at 1:24,000 scale. This endeavor was achieved through the combined efforts of U.S. Geological Survey and Missouri Geological Survey individual quadrangle mapping and additional fieldwork by the authors of this report. Geologic data covering the area of the ONSR and a 1-mile (1.6-kilometer) buffer zone su
By
Florence Bascom Geoscience Center
December 31, 2015

Karst of the Mid-Atlantic region in Maryland, West Virginia, and Virginia

The Mid-Atlantic region hosts some of the most mature karst landscapes in North America, developed in highly deformed rocks within the Piedmont and Valley and Ridge physiographic provinces. This guide describes a three-day excursion to examine karst development in various carbonate rocks by following Interstate 70 west from Baltimore across the eastern Piedmont, across the Frederick Valley, and in
By
Florence Bascom Geoscience Center
December 31, 2015

Structural geology of the Valley and Ridge and Plateaus provinces

The Valley and Ridge physiographic province comprises the area between the Blue Ridge province on the east and the Appalachian Plateau province on the west. The province consists of Paleozoic carbonate and clastic rocks that were folded and thrust faulted during the Alleghanian orogeny. The Appalachian Plateau province consists of mostly flat lying to gently dipping upper Paleozoic rocks, with the
By
Florence Bascom Geoscience Center
December 31, 2015

The ONSR is a karst park, containing many springs and caves. The “jewels” of the park are large springs, several of first magnitude, that contribute significantly to the flow and water quality of the Current River and its tributaries. Completion of 1:24,000-scale geologic mapping of the park and surrounding river basin, along with synthesis of published hydrologic data, allows us to examine the sp
By
Florence Bascom Geoscience Center
June 30, 2015

NACSN, note 67--Application for revision of Articles 36 and 37, Lithodemic units of the North American stratigraphic code

Currently the North American Stratigraphic Code, (NACSN 2005, Article 37) sets restrictions on the use of the term “complex” for lithodemic units. With exceptions for “volcanic complex” and “structural complex,” a complex must consist of more than one genetic class of rock (i.e., sedimentary, igneous or metamorphic). Thus, the use of the term “complex” to describe masses of intrusive rocks is not
By
Florence Bascom Geoscience Center
April 30, 2015

The lower Paleozoic rocks to be examined on this trip through the central Appalachians represent an extreme range of depositional environments. The lithofacies we will examine range from pelagic radiolarian chert and interbedded mudstone that originated on the deep floor of the Iapetus Ocean, through mud cracked supratidal dolomitic laminites that formed during episodes of emergence of the long-li
By
Florence Bascom Geoscience Center
link
October 16, 2020

Recently, the Florence Bascom Geoscience Center, USGS lost Jack Epstein, a colleague, mentor, and friend. Here is a fitting tribute and memorial to...