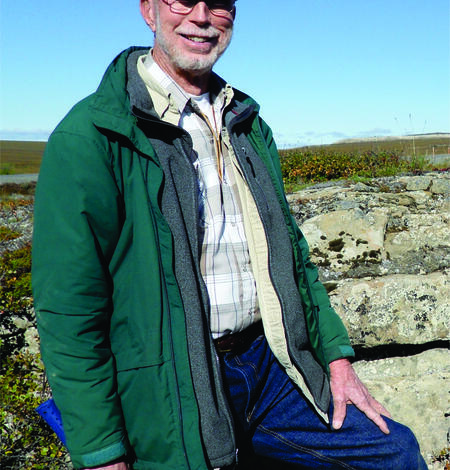 Dr. Warren J. Nokleberg is a Scientist Emeritus in the Geology, Minerals, Energy, and Geophysics Science Center. After coming to the USGS in 1966, His research currently focuses on compiling and synthesizing a digital earth science atlas of Sierra Nevada, CA. He recently co-edited and published an e-book about the Dynamic Geology of the Northern Cordillera and Adjacent Marine Areas.

After starting graduate school in 1965, his major research emphases have been on the mineral deposits, metallogenesis, bedrock geology, and tectonics of the central Sierra Nevada, California, the Stillwater Igneous Complex, Montana, the Eastern Alaska Range, Alaska, the Trans-Alaska Crustal Transect (TACT) in Eastern Alaska, the Circum-North Pacific (Russian Far East, Alaska, and the Canadian Cordillera), and Northeast Asia. For these projects, he has led and coordinated large and complex teams of national and international geologists to compile, synthesize, interpret, and publish large and complex interpretative articles on regional geology, tectonics, and metallogenesis, regional geologic maps, mineral resource maps, mineral deposit databases, and spatial (GIS) databases.

He has authored or co-authored over 260 scientific papers. In 2002, he was awarded Meritorous Service Award of the Department of Interior for exceptional scientific research and leadership in Alaska and the Circum-North Pacific for the U.S. Geological Survey.

This map portrays the geodynamics of Northeast Asia at a scale of 1:5,000,000 using the concepts of plate tectonics and analysis of terranes and overlap assemblages. The map is the result of a detailed compilation and synthesis at 5 million scale and is part of a major international collaborative study of the mineral resources, metallogenesis, and tectonics of northeast Asia conducted from 1997 th
By
Energy and Minerals, Energy Resources Program, Mineral Resources Program, National Laboratories Program, Science and Decisions Center, Groundwater and Streamflow Information Program, Geology, Minerals, Energy, and Geophysics Science Center
April 30, 2014

Geologic mapping of the Hines Creek Fault and the adjacent Trident Glacier and McGinnis Glacier Faults to the north in the eastern Alaska Range, Alaska, reveals that these faults were active during the Cenozoic. Previously, the Hines Creek Fault, which is considered to be part of the strike-slip Denali Fault system (Ridgway and others, 2002; Nokleberg and Richter, 2007), was interpreted to have be
By
Energy and Minerals, Energy Resources Program, Groundwater and Streamflow Information Program, Mineral Resources Program, National Laboratories Program, Science and Decisions Center, Alaska Science Center, Geology, Minerals, Energy, and Geophysics Science Center
May 31, 2002

Geologic map of the Stillwater Complex, Montana: a digital database

This report provides a digital version of the Geologic map of the Stillwater Complex, Montana by Page and Nokleberg (1974). Paper copies of the four geologic map sheets from the original report were scanned and initially attributed by Optronics Specialty Co., Inc. (Northridge, CA) and remitted to the U.S. Geological Survey for further attribution and publication of the geospatial digital files.
May 31, 2002

One of the most spectacular physiographic images of the conterminous United States, and the first to have been produced digitally, is that by Thelin and Pike (USGS I-2206, 1991). The image is remarkable for its crispness of detail and for the natural appearance of the artificial land surface. Our goal has been to produce a shaded-relief image of Alaska that has the same look and feel as the Thelin
By
Alaska Science Center
December 31, 1993

Geologic map of the Valdez A-4, B-3, B-4, C-3, C-4, and D-4 quadrangles, northern Chugach Mountains and southern Copper River basin, Alaska

Exploratory geochemical sampling was done in 1979, 1980, and 1981. The collection of composite samples of stream sediment or glacial debris was emphasized the first 2 years; the last year was spent collecting mineralized stream pebbles, float, and outcrop samples. The stream-sediment and heavy- mineral-concentrate samples were collected at 795 sites on tributary streams having drainage basins rang
December 31, 1993

This article describes the regional effects of Cenozoic subduction along the outboard margin of the Northern Cordillera (Alaska, USA, and Western Canada), and thereby acquaints the reader with several chapters of the e-book Dynamic Geology of the Northern Cordillera (Alaska, Western Canada, and Adjacent Marine Areas). This article and the e-book are written for earth-science students and teachers.
By
Geology, Minerals, Energy, and Geophysics Science Center
November 30, 2017

This chapter describes the exploration, development, and geologic setting of petroleum resources (including tar sands), coal resources (including coalbed methane), and geothermal energy resources of the Northern Cordillera.For petroleum resources, the chapter describes: (1) the history of petroleum development and production, first for Alaska and then for the Canadian Cordillera; and (2) generaliz
By
Energy and Minerals, Energy Resources Program, Mineral Resources Program, National Laboratories Program, Science and Decisions Center, Geology, Minerals, Energy, and Geophysics Science Center
November 30, 2017

How the solid earth works

This chapter describes the regional geology and tectonic origins of the major geologic units for the Northern Cordillera. The goals of the chapter are to: (1) provide a summary and regional overview of this vast region that contains a complicated geologic history; and (2) describe the major geologic units and tectonic events that cover a broad geologic time span from the Proterozoic to the Holocen
By
Energy and Minerals, Energy Resources Program, Mineral Resources Program, National Laboratories Program, Science and Decisions Center, Geology, Minerals, Energy, and Geophysics Science Center
October 31, 2017

Marine geology and tectonics--What is under all that water?

The Geologic Road Guides for the Southern Canadian Cordillera provide a layperson’s understanding of the major geologic units and their tectonic origins along portions of two sets of major highways corridors, herein termed the Southern Road Guide and the Northern Road Guide. The two routes are shown on the Southern Canadian Cordillera Geologic Map. The first page of each Road Guide is this map tha
By
Energy and Minerals, Energy Resources Program, Mineral Resources Program, National Laboratories Program, Science and Decisions Center, Geology, Minerals, Energy, and Geophysics Science Center
December 31, 2016

The middle Paleozoic through Present tectonic evolution of the Northern Cordillera is portrayed in a series of 15 Tectonic Model figures. These figures depict the successive stages of formation and accretion of orogenic collages along the western margin of the North American Plate (craton and craton margin) and adjacent marine areas. The orogenic collages are composed of terranes and overlap assem
By
Energy and Minerals, Energy Resources Program, Mineral Resources Program, National Laboratories Program, Science and Decisions Center, Geology, Minerals, Energy, and Geophysics Science Center