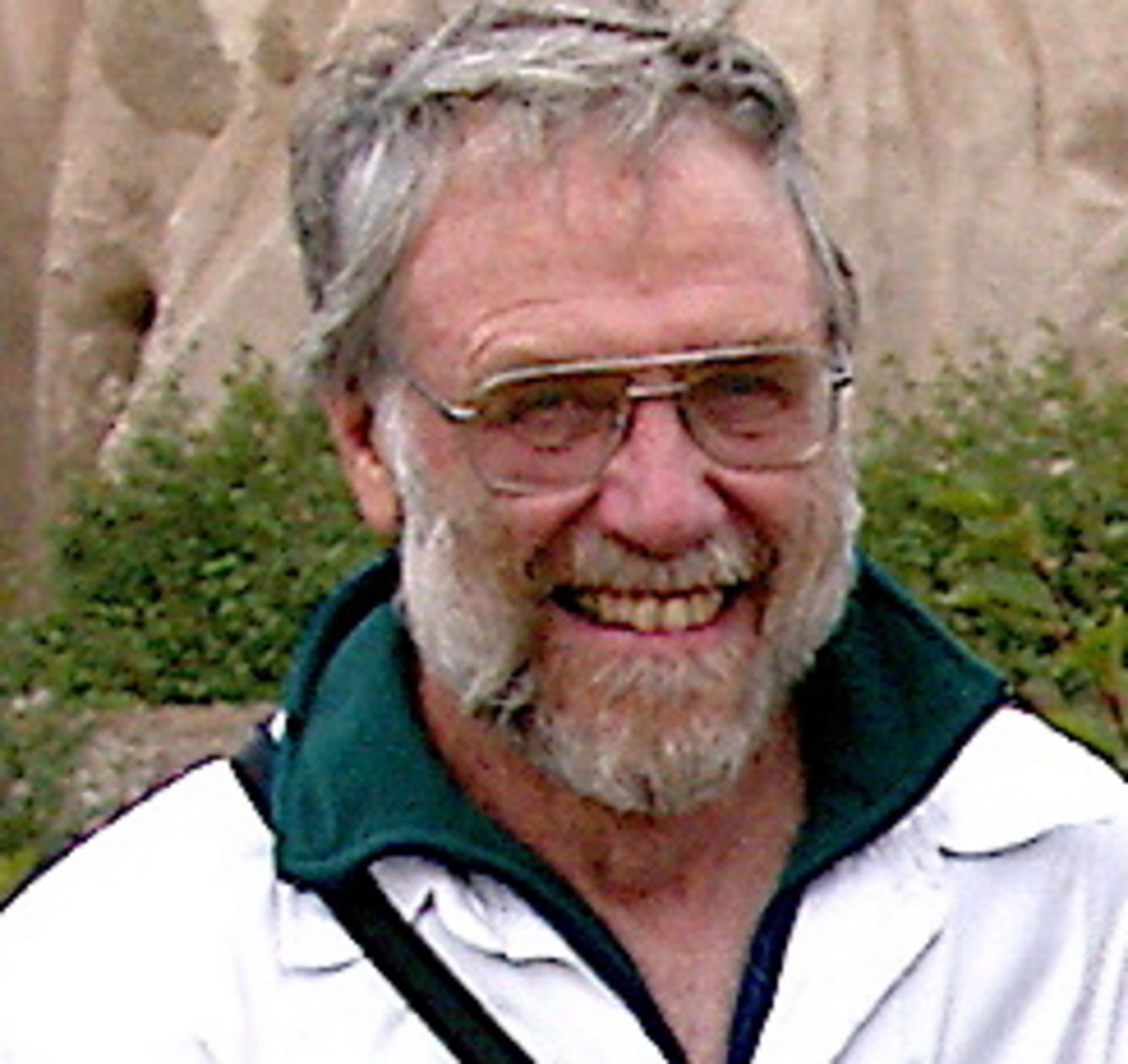 My eclectic and evolving USGS career began in 1977 when I was 39.  I’m a field-intensive continental geologist interested in magmatism, geomorphology, tectonics, and deep-time (not real-time) geologic history.  I’ve emphasized on-foot authentic geologic mapping of blank spots on the map, largely in wilderness or otherwise uninhabited areas.

My early work attracted AGU’s Bowen Award for chemical petrology (magmatic zonation of the Bishop Tuff and Novarupta 1912, isotope evolution of caldera cycles at Yellowstone, advancing the model of fundamentally basaltic transcrustal magmatism [JGR 1981]; and I was excused the wild-goose chase of Soret effects in magma chambers). IAVCEI later gave me the Thorarinsson Medal in Volcanology, recognizing numerous papers on the Katmai region, the Cascades, the Chilean Andes, my deep-crustal MASH model of arc magmatism, and the granitic Mush model of rhyolite melt extraction. GSA recently gave me (and Judy Fierstein) the 2019 Florence Bascom Geologic Mapping Award, which celebrated what I love doing best (geologic maps of Mount Adams, Mount Baker, Three Sisters, Katmai, Simcoe Mountains, Pantelleria, Quizapu–Descabezado, Mammoth Mountain, Laguna del Maule, and Long Valley caldera. Early-on, I set aside my loner tendency (imprudent in remote areas) and teamed up with Judy Fierstein, an intrepid and indefatigable field partner of 41 years. Honi soit qui mal y pense. We survived or dodged many and varied risks together. The renowned Argon Geochronology Lab at Menlo Park (directed by Brent Dalrymple, Marv Lanphere, and Andy Calvert) has been an essential support of much of our work. My career owes much to many USGS colleagues, most of all to Patrick Muffler, Bob Christiansen, Paul Bateman, and Charlie Bacon.

Before USGS, I grew up bi-coastally in Dedham MA and Mill Valley CA. My first paper & pencil map was of Muddy River and the Fenway at age 8, and I have been a Red Sox fan ever since. I was a US Army private 1958–9 and Top Eight Phi Beta Kappa in my Harvard Class of 1960–61. I won Harvard’s Detur Award in the Humanities in 1958 and was a medalist (29th) in the 1960 Boston Marathon. My undergrad advisor, trilobite authority Harry Blackmore Whittington, offered me a thesis project on the Burgess Shale (perhaps a wonderful life but a career indoors, rejected); Harry chose better with Simon Conway Morris. As a Harvard Travelling Fellow, I went around the world alone 1961–62, ending up with two months training immersion at Percy Cerutty’s running camp in Victoria. Drove my VW van to Panama and back in 1963, meeting the Sandinista leadership in Estelí and Managua. After two years of Harvard grad school in International Affairs, I withdrew, alienated by bitterness over the Vietnam War and its Harvard faculty proponents. I was next a NPS Naturalist (John Muir style) at Death Valley, Muir Woods, Glacier Bay, Olympic, and Grand Canyon (1966–70). At Berkeley grad school in Geology, I was motivated by Ian Carmichael, Clyde Wahrhaftig, Mitch Reynolds, Herb Shaw, and Charlie Bacon. An all-nighter with Dallas Peck at the bar of a Baja rancheria sealed my USGS commitment. In 2021, I’m still “running” an hour every day, mapping, writing, and restraining my socio-political exasperation.

Trachyandesite of Kennedy Table, its vent complex, and post−9.3 Ma uplift of the central Sierra Nevada

Tectonic interpretation of the central Sierra Nevada—whether the crest of the Sierra Nevada (California, USA) was uplifted in the late Cenozoic or whether the range has undergone continuous down-wearing since the Late Cretaceous—is controversial, since there is no obvious tectonic explanation for renewed uplift. The strongest direct evidence for late Cenozoic uplift of the central Sierra Nevada co
By
Volcano Hazards, Volcano Science Center
February 24, 2021

In Mono Basin, California, USA, a near-circular ring fracture 12 km in diameter was proposed by R.W. Kistler in 1966 to have originated as the protoclastic margin of the Cretaceous Aeolian Buttes pluton, to have been reactivated in the middle Pleistocene, and to have influenced the arcuate trend of the chain of 30 young (62−0.7 ka) rhyolite domes called the Mono Craters. In view of the frequency a
By
Volcano Hazards, Volcano Science Center
September 26, 2018

Frequency of volcanic eruptions in the Mammoth Lakes Sierra

Geologists recognize lavas and ash deposits from about 60 past eruptions in the area around Mammoth Mountain and Devils Postpile, California. This raises the unanswerable question, “When will it erupt again?” An alternative, answerable, and informative question is, “How often has it erupted?”In the Mammoth Lakes Sierra, geologists have mapped in great detail all the lavas and ash deposits produced
By
Volcano Hazards, Volcano Science Center
March 31, 2018

Several cubic kilometers of Paleozoic graphite-bearing argillitic country rocks are present as lithic fragments in Bishop Tuff ignimbrite and fallout. The lithics were entrained by the 650 km3 of rhyolite magma that vented during the 5- to 6-day-long, caldera-forming eruption at Long Valley, California. The caldera is floored by a 350 km2 roof plate that collapsed during the eruption and consists
By
Volcano Hazards, Volcano Science Center
July 25, 2017

This guide to the geology of Long Valley Caldera is presented in four parts: (1) An overview of the volcanic geology; (2) a chronological summary of the principal geologic events; (3) a road log with directions and descriptions for 38 field-trip stops; and (4) a summary of the geophysical unrest since 1978 and discussion of its causes. The sequence of stops is arranged as a four-day excursion for
By
Volcano Hazards, Volcano Science Center
December 15, 2016

Owens River Gorge, today rimmed exclusively in 767-ka Bishop Tuff, was first cut during the Neogene through a ridge of Triassic granodiorite to a depth as great as its present-day floor and was then filled to its rim by a small basaltic shield at 3.3 Ma. The gorge-filling basalt, 200 m thick, blocked a 5-km-long reach of the upper gorge, diverting the Owens River southward around the shield into R
By
Volcano Hazards, Volcano Science Center
September 30, 2016

The June 6, 1912 eruption of more than 13 km3 of dense rock equivalent (DRE) magma at Novarupta vent, Alaska was the largest of the 20th century. It ejected >7 km3 of rhyolite, ~1.3 km3 of andesite and ~4.6 km3 of dacite. Early ideas about the origin of pyroclastic flows and magmatic differentiation (e.g., compositional zonation of reservoirs) were shaped by this eruption. Despite being well studi
By
Volcano Hazards, Volcano Science Center
July 12, 2016

Eruptive history of Mammoth Mountain and its mafic periphery, California

This report and accompanying geologic map portray the eruptive history of Mammoth Mountain and a surrounding array of contemporaneous volcanic units that erupted in its near periphery. The moderately alkaline Mammoth eruptive suite, basaltic to rhyodacitic, represents a discrete new magmatic system, less than 250,000 years old, that followed decline of the subalkaline rhyolitic system active benea
By
Volcano Hazards, Volcano Science Center
September 1, 2015

Despite claims to the contrary, the compositions of magnetite and ilmenite in the Bishop Tuff correctly record the changing conditions of T and fO2 in the magma reservoir. In relatively reduced (∆NNO < 1) siliceous magmas (e.g., Bishop Tuff, Taupo units), Ti behaves compatibly (DTi ≈ 2-3.5), leading to a decrease in TiO2 activity in the melt with cooling and fractionation. In contrast, FeTi-oxides
By
Volcano Hazards, Volcano Science Center
September 1, 2015

Explosive eruptions of large-volume rhyolitic magma systems are common in the geologic record and pose a major potential threat to society. Unlike other natural hazards, such as earthquakes and tsunamis, a large rhyolitic volcano may provide warning signs long before a caldera-forming eruption occurs. Yet, these signs—and what they imply about magma-crust dynamics—are not well known. This is becau
By
Volcano Hazards, Volcano Science Center
December 31, 2013

Mountainous parts of the Yakama Nation lands in south-central Washington are mostly covered by basaltic lava flows and cinder cones that make up the Simcoe Mountains volcanic field. The accompanying geologic map of the central part of the volcanic field has been produced by the U.S. Geological Survey (USGS) on behalf of the Water Resources Program of the Yakama Nation. The volcanic terrain stretch
By
Volcano Hazards, Volcano Science Center
June 30, 2004

Geologic map of the Mount Baker 30- by 60 minute quadrangle, Washington

One of the dominating peaks of the Pacific Northwest, Mount Adams, stands astride the Cascade crest, towering 3 km above the surrounding valleys. The icecapped 3742-m (12,276') stratovolcano has for centuries been called Pah-to by the region's indigenous people, who hold the mountain sacred as a symbol of continuity and a source of prosperity and inspiration. Comparable reverence helped secure inc
By
Natural Hazards, Volcano Hazards, Volcano Science Center
November 30, 2004