The U.S. Army at Fort Irwin National Training Center (NTC) obtains all of its potable water supply from Irwin, Langford, and Bicycle Basins within the base boundaries. Groundwater pumping, since as early as 1941, has resulted in water-level declines in all of these basins and the disposal of treated wastewater in the Irwin Basin has resulted in elevated nitrate concentrations in some wells in Irwin Basin.

Land-surface deformation, consisting of an earth fissure and sink-like depressions, occurred in 2005 on the Bicycle Lake (dry) playa in the southern part of the Bicycle Basin. Earth fissures are a major concern to the NTC because aircraft runways constructed on the playa are used for transporting troops and supplies.

In 1992, the U.S. Geological Survey (USGS) entered into an agreement with the NTC to evaluate the long-term availability and quality of groundwater in the Irwin, Langford, and Bicycle Basins. The objectives of the study were to describe the geohydrologic and geochemical frameworks of these basins; develop groundwater flow models to help refine the understanding of the geohydrology; and evaluate the long-term availability and quality of groundwater at the base. The evaluations of Irwin and Langford Basins have been completed, and the evaluation of Bicycle Basin is scheduled to be completed in 2011. In 2008, the USGS began a study to evaluate the location, extent, and magnitude of land-surface deformation on the Bicycle Lake playa in Bicycle Basin. Monitoring of the Bicycle Lake playa is ongoing.

The NTC is planning to expand the area of the base in the near future. The base expansion will involve training additional troops, which will increase the water demand at the base. In addition, the U.S. Army Corps of Engineers has selected the NTC for the construction of the largest solar power plant proposed to date within the Department of Defense. Treated wastewater will be used as the cooling water for the solar power plant. Currently the treated wastewater is a major source of recharge to the Irwin Basin (Densmore and Londquist, 1997). To effectively plan for the base expansion and the solar plant, there will be a need to update and utilize the groundwater-flow models developed for the Irwin, Langford, and Bicycle Basins to evaluate the effect of future recharge and pumping on the available water resources at the base. In addition, groundwater basins that have not been previously studied on the base need to be evaluated to determine their potential for providing additional water supply.

The objectives of this study are to evaluate the current and long-term availability of groundwater resources at the NTC. The study will involve (1) collecting and compiling existing hydrologic data for the entire NTC; (2) updating the groundwater-flow models for Irwin, Langford, and Bicycle Basins to 2010 conditions; (3) collecting new hydrologic data to improve the understanding of groundwater availability at the base with special emphasis on groundwater basins not previously investigated by the USGS (Superior Basin, Coyote Basin, “Central Corridor” area, Goldstone Basin, Leach Basin, Red Pass Basin, Nelson Basin, and Drinkwater Basin); (4) evaluating the cause of land-surface deformation on the Bicycle Lake playa and its impact on water supply from Bicycle Basin; and (5) utilizing the updated Irwin, Langford, and Bicycle Basin models and hydrologic information collected from the groundwater basins not previously studied to evaluate the long-term availability of water at the NTC. The proposed study will be completed in a phased approach depending on the availability of funding.

The study approach involves evaluating the water resources at each of the major groundwater basins overlain by the NTC. Previous studies have investigated in detail the groundwater resources of the Irwin, Langford, and Bicycle Basins; therefore, work on these basins will involve updating the existing data and models developed for the basins and collecting new data where the previous studies indicated data gaps. Few data are available in the previously unstudied basins; therefore, the investigations of these basins will involve the collection of geophysical data to characterize the size and shape of the basins, well drilling to characterize the aquifer properties and water quality, and preliminary groundwater models to evaluate the long-term availability of groundwater. The order of investigation will be determined by the NTC.

The U.S. Army Fort Irwin National Training Center (NTC), approximately 35 mi north-northeast of Barstow, California, covers approximately 1,177 square miles, and is comprised of ten groundwater basins, three of which have been subdivided into subbasins on the basis of additional hydrologic testing. Since the early 1990s, the U.S. Geological Survey (USGS) has been studying water resources issues at
By
California Water Science Center, Geology, Geophysics, and Geochemistry Science Center 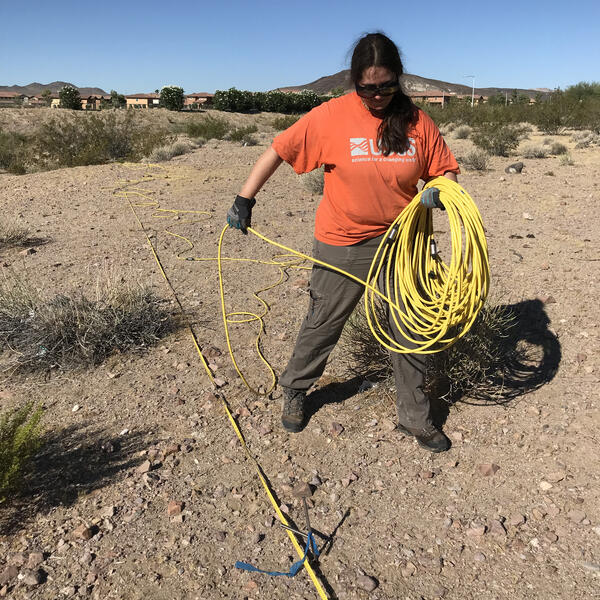 In view of the U.S. Army’s historical reliance and plans to increase demands on groundwater to supply its operations at Fort Irwin National Training Center (NTC), California, coupled with the continuing water-level declines in some developed groundwater basins as a result of pumping, the U.S. Geological Survey (USGS), in cooperation with the U.S. Army, evaluated the water resources, including wate
By
Water Resources, California Water Science Center
June 5, 2019

Groundwater has been pumped in the Bicycle Basin at Fort Irwin National Training Center since the 1960s, and the amount pumped has generally increased since the 1990s. After a large crack (approximately 0.5-kilometer long) formed at the surface of Bicycle Lake playa during 2005–06 in the area used as an aircraft runway, a monitoring study was initiated by the U.S. Geological Survey, in cooperation
By
Water Resources, California Water Science Center
December 13, 2018

Geologic and geophysical investigations in the vicinity of Fort Irwin National Training Center, California, have been completed in support of groundwater investigations, and are presented in eight chapters of this report. A generalized surficial geologic map along with field and borehole investigations conducted during 2010–11 provide a lithostratigraphic and structural framework for the area duri
By
Geology, Minerals, Energy, and Geophysics Science Center
December 13, 2018

Between 2010 and 2012, a total of 79 time-domain electromagnetic (TEM) soundings were collected in 12 groundwater basins in the U.S. Army Fort Irwin National Training Center (NTC) study area to help improve the understanding of the hydrogeology of the NTC. The TEM data are discussed in this chapter in the context of geologic observations of the study area, the details of which are provided in the
By
Energy and Minerals, Energy Resources Program, Mineral Resources Program, National Laboratories Program, Science and Decisions Center, Groundwater and Streamflow Information Program, Geology, Minerals, Energy, and Geophysics Science Center
July 19, 2018

Groundwater pumping from Bicycle Groundwater Basin (referred to as Bicycle Basin) in the Fort Irwin National Training Center, California, began in 1967. From 1967 to December 2010, about 46,000 acre-feet of water had been pumped from the basin and transported to the Irwin Basin. During this time, not only did water levels in the basin decline by as much as 100 feet, the quality of the groundwater
By
Water Resources, California Water Science Center
December 1, 2017

In support of a hydrogeologic study of the groundwater resources on Fort Irwin, we have combined new gravity data with preexisting measurements to produce an isostatic residual gravity map, which we then separated into two components reflecting (1) the density distribution in the pre-Cenozoic basement complex and (2) the distribution of low-density Cenozoic volcanic and sedimentary deposits that l
By
Energy and Minerals, Energy Resources Program, Mineral Resources Program, National Laboratories Program, Science and Decisions Center, Groundwater and Streamflow Information Program, Geology, Minerals, Energy, and Geophysics Science Center
December 2, 2014

The geology and landscape of the Fort Irwin area, typical of many parts of the Mojave Desert, consist of rugged mountains separated by broad alluviated valleys that form the main coarse-resolution features of the geologic map. Crystalline and sedimentary rocks, Mesozoic and older in age, form most of the mountains with lesser accumulations of Miocene sedimentary and volcanic rocks. In detail, the
By
Energy and Minerals, Energy Resources Program, Mineral Resources Program, National Laboratories Program, Science and Decisions Center, Groundwater and Streamflow Information Program, Geosciences and Environmental Change Science Center, Geology, Minerals, Energy, and Geophysics Science Center
December 2, 2014

Introduction to the geologic and geophysical studies of Fort Irwin, California

Geologic and geophysical investigations in the vicinity of Fort Irwin National Training Center, California, have been completed in support of groundwater investigations, and are presented in eight chapters of this report. A generalized surficial geologic map along with field and borehole investigations conducted during 2010–11 provide a lithostratigraphic and structural framework for the area duri
By
Energy and Minerals, Energy Resources Program, Mineral Resources Program, National Laboratories Program, Science and Decisions Center, Groundwater and Streamflow Information Program, Geology, Minerals, Energy, and Geophysics Science Center