This study is part of ongoing research in Iowa to investigate the availability (quantity and quality) of water in alluvial aquifers that are used for agricultural, domestic, municipal, and industrial supplies. Previous research included modeling and delineation of ground water flow in the Mississippi River, Des Moines River, iowa, and Cedar River alluvial aquifers. The water quality of these and other alluvial aquifers in Iowa also have been studied. 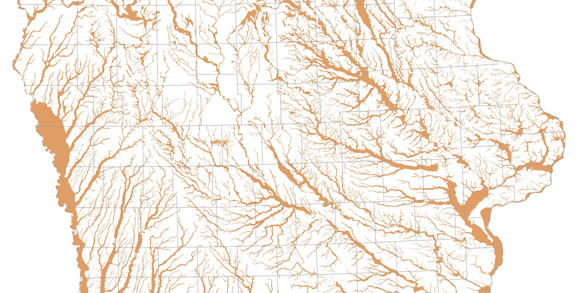 The Mississippi River Alluvial aquifer in Muscatine County Iowa is heavily used as a source of industrial, municipal, and agricultural supply. Norton and others (1912) first described the installation of alluvial wells for the city of Muscatine. Hydrologic properties and chemical characteristics of the aquifer were described by Hansen and Steinhilber (1977). A steady-state, ground-water model indicated that drawdown in the lower alluvium caused by the pumping centers in Iowa extends beneath the Muscatine Slough in the northwest part of the study area and beneath the Mississippi River in the central and northern parts of the area (Lucey and others, 1995) . The primary sources of ground water in the alluvium are recharge from precipitation, leakage from the Mississippi River, and infiltration of upland runoff. The bedrock is not a major contributor of ground water to the alluvium. Hypothetical model pumping scenarios indicates that pumping causes simulated drawdown that varies from about 10 ft to greater than 50 ft relative to 1993
conditions (Lucey, 1997). Increased pumping could affect long-term water quality and hydrology in the Muscatine area (Lucey, 1997). The Lucey and others (1995) model was modified to delineate sources of water to the Mississippi River alluvial aquifer near Muscatine, IA (Savoca and others, 2002) . The model indicated that primary sources of inflow to the aquifer are recharge through infiltration of precipitation and upland runoff (53 percent) and Mississippi River leakage (41 percent) and that the average traveltime of water from recharge to discharge at the municipal well fields was 13.6 years.

The flow system of the Mississippi River Alluvial Aquifer near Burlington, IA was modeled to identify sources of water and to assess effects of additional hypothetical withdrawls (Boyd, 2001). The primary sources of ground water to the alluvium were recharge from precipitation, subsurface flow from Flint River streamchannel deposits adjacent to the alluvium, and Mississippi River leakage.

NAWQA water quality (Savoca and others, 2000) WRI 99-4246 GW in agricultural and urban areas of alluvial aquifer. The greatest concentrations of nitrate and herbicides were found in the shallowest parts of the Iowa River alluvial aquifer (Detroy and Kuzniar, 1988: Kalkhoff and others, 1992). Median nitrate concentrations ranged from 16 mg/l near the top to less than 0.10 mg/L near the bottom of a 10 foot thick small headwaters stream alluvial aquifer (Kalkhoff and Schaap, 1996) in northeast Iowa. Movement of
contaminants from land surface was dependent on precipitation with nitrate and pesticides being detected in the in the aquifer within six weeks of chemical application (Detroy and Kuzniar, 1988).

The detection rate and concentration of metolachlor and atrazine in alluvial aquifers were consistent with their patterns of chemical use and/or application rates (Kolpin and others, 1997a). Herbicide compounds were detected in the alluvial aquifer more often than any other aquifer used for municipal water supply in Iowa (Kolpin and others, 1997b).

Effects of land use and hydrogeology on the water quality of alluvial aquifers in eastern Iowa and southern Minnesota, 1997

Ground-water samples were collected from monitoring wells at 31 agricultural and 30 urban sites in the Eastern Iowa Basins study unit during June–August 1997 to evaluate the effects of land use and hydrogeology on the water quality of alluvial aquifers. Ground-water samples were analyzed for common ions, nutrients, dissolved organic carbon, tritium, radon-222, pesticides and pesticide metabolites,
By
Water Resources, Central Midwest Water Science Center
April 30, 1998

Evaluation of drawdown and sources of water in the Mississippi River alluvium caused by hypothetical pumping, Muscatine, Iowa

A study was conducted to evaluate drawdown and volumetric changes in sources of water in the Mississippi River alluvium caused by hypothetical pumping. A steady-state, ground-water flow model was constructed for a previous study to simulate February 1993 hydrologic conditions, which were assumed to be an acceptable estimate of the ground-water system at equilibrium. The flow model was modified for
By
Water Resources, Central Midwest Water Science Center
December 31, 1996

Temporal trends of selected agricultural chemicals in Iowa's groundwater, 1982-1995: Are things getting better?

Herbicide compounds were prevalent in ground water across Iowa, being detected in 70% of the 106 municipal wells sampled during the summer of 1995. Herbicide degradation products were three of the four most frequently detected compounds for this study. The degradation product alachlor ethanesulfonic acid was the most frequently detected compound (65.1%), followed by atrazine (40.6%), and the degra
By
Water Resources, Ecosystems, Toxic Substances Hydrology, Environmental Health Program, Kansas Water Science Center, Central Midwest Water Science Center
August 31, 1996

Agricultural chemicals in ground and surface water in a small watershed in Clayton County, Iowa, 1988-91

An investigation was conducted from October 1988 through September 1991 to (1) describe the quality of water in shallow, unconsolidated materials in the 1.09-square-mile Deer Creek watershed in Clayton County, Iowa, and to (2) define the quantity and seasonal distribution of selected agricultural chemicals in water from this watershed. Surficial unconsolidated aquifer materials that discharge wate
By
Water Resources, Central Midwest Water Science Center
April 30, 1996

Hydrogeology and water quality of the Mississippi River alluvium near Muscatine, Iowa, June 1992 through June 1994

Occurrence and distribution of nitrate and herbicides in the Iowa River alluvial aquifer, Iowa; May 1984 to November 1985

From May 1984 to November 1985, the U.S. Geological Survey, in cooperation with the University of Iowa Hygienic Laboratory and the Iowa Department of Natural Resources, Geological Survey Bureau, investigated nitrate and herbicides in the Iowa River alluvial aquifer. The occurrence and distribution of nitrate and selected herbicides were determined in the Iowa River alluvial aquifer, a sand and gra
By
Water Resources, Central Midwest Water Science Center
December 31, 1993

Mississippi River alluvium in the Muscatine, Iowa, area provides large quantities of good quality ground water for municipal, industrial, and agricultural supplies. Three municipal well fields for the City of Muscatine produce a total of about 27 million gallons per day from the alluvium. A previously published steady-state ground-water flow model was modified, and results from the model were used
By
Water Resources, Central Midwest Water Science Center
December 1, 1992

Herbicide and nitrate variation in alluvium underlying a cornfield at a site in Iowa County, Iowa

A hydrologic investigation to determine vertical and seasonal variation of atrazine, alachlor, cyanazine, and nitrate at one location and to relate the variation to ground-water movement in the Iowa River alluvium was conducted in Iowa County, Iowa, from March 1986 to December 1987. Water samples were collected at discrete intervals through the alluvial sequence from the soil zone to the base of t
By
Water Resources, Central Midwest Water Science Center