The USGS implemented the National Water-Quality Assessment (NAWQA) Program in 1991 to support national, regional, and local information needs and decisions related to water-quality management and policy. Shaped by and coordinated with ongoing efforts of other Federal, State, and local agencies, the NAWQA Program is designed to answer: What is the condition of our Nation’s streams and ground water? How are the conditions changing over time? How do natural features and human activities affect the quality of streams and groundwater, and where are those effects most pronounced? By combining information on water chemistry, physical characteristics, stream habitat, and aquatic life, the NAWQA Program aims to provide science-based insights for current and emerging water issues and priorities.

The Upper Colorado River Basin is one of 51 water-quality assessments initiated since 1991, when the U.S. Congress appropriated funds for the USGS to begin the NAWQA Program.

USGS Circular 1214 summarizes major findings about water quality in the Upper Colorado River Basin that emerged from an assessment conducted between 1996 and 1998.

The Upper Colorado River Basin in Colorado and Utah has a drainage area of about 17,800 square miles, all except 100 mi² of this area is in Colorado (Driver, 1994). The Colorado River and its tributaries originate in the mountains of central Colorado and flow about 230 mi southwest into Utah.   The Continental Divide marks the eastern and southern boundary of the basin, with altitudes over 14,000 ft. Topography in the western part of the basin generally consists of high plateaus bordered by steep cliffs along the valleys, and the lowest altitude (4,300 ft) is near the Colorado-Utah border. The basin is divided almost equally into two physiographic provinces: the Southern Rocky Mountains in the eastern part and the Colorado Plateau in the western part (Hunt, 1974). The geology varies substantially and consists of crystalline rocks of Precambrian age, stratified sedimentary rocks, and alluvial deposits.

Because of large changes in altitude, the climate in the basin varies substantially from alpine conditions in the east to semiarid in the west. Mean annual temperatures range from as low as 32.8° F in Gunnison County near the Continental Divide to as high as 54.1° F near Grand Junction, Colo. (Benci and McKee, 1977).

Precipitation in the basin ranges from more than 40 in./yr in the eastern mountainous regions to less than 10 in./yr in the lower altitude western regions. Mountain areas receive most of their precipitation during the winter months when accumulation of snow can exceed on average 100 in. per season. The Grand Junction area receives the largest amount of precipitation during the month of August as a result of weather patterns that produce late-afternoon thunderstorms (Chaney and others, 1987).

The 1990 population in the largely rural Upper Colorado River Basin was approximately 234,000, less than 10 percent of the total population of the State of Colorado (Bureau of Census, 1990). The largest population center is Grand Junction (30,209), which is located at the confluence of the Colorado and Gunnison Rivers. The larger cities in the basin are located predominantly near agricultural lands or in mountain recreational communities. Population of many counties in the basin increased about 5 percent from 1990 to 1992. Eagle and Summit Counties had the largest increases, of about 12 and 13 percent, respectively.

Land designated for use as either rangeland or forest is the largest land use, accounting for about 85 percent of the basin. Large parts of the study unit are set aside for recreational use, including all or parts of 4 National Park Service areas, 5 National Forests and numerous wilderness areas, 11 State parks, numerous State Wildlife Management areas, and 17 ski areas. Tourism and recreational activities are a major industry in the study unit past and present. Mining activities past and present are an important land use and have included the extraction of metals and energy fuels. Urban land is one of the smaller land uses in the mostly rural basin. Agriculture is the traditional land use in the study unit in counties such as Delta, Garfield, Gunnison, Mesa, and Montrose. Little crop production is possible without irrigation because of the semiarid climate.

The NAWQA Program was not intended to assess the quality of the Nation’s drinking water, such as by monitoring water from household taps. Rather, the assessments focus on the quality of the resource itself, thereby complementing many ongoing Federal, State, and local drinking-water monitoring programs. The comparisons made in this study to drinking-water standards and guidelines are only in the context of the available untreated resource.

Water-quality conditions in the Upper Colorado River Basin are a result of both natural and human factors.

USGS Circular 1214 summarizes major findings about water quality in the Upper Colorado River Basin that emerged from an assessment conducted between 1996 and 1998. 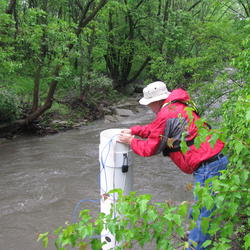 Our surface water, groundwater, and aquatic ecosystems are priceless resources, used by people across the Nation for drinking, irrigation, industry, and recreation. The National Water-Quality Assessment (NAWQA) Project is a leading source of scientific data and knowledge for development of science-based policies and management strategies to improve and protect our water resources.
By
Water Resources, National Water Quality Program, Oregon Water Science Center
link
March 3, 2019

Our surface water, groundwater, and aquatic ecosystems are priceless resources, used by people across the Nation for drinking, irrigation, industry, and recreation. The National Water-Quality Assessment (NAWQA) Project is a leading source of scientific data and knowledge for development of science-based policies and management strategies to improve and protect our water resources.
Learn More

Water-quality samples were collected in the summer of 1997 from 45 sites (43 wells and 2 springs) in selected alluvial aquifers throughout the Southern Rocky Mountains physiographic province of the Upper Colorado River Basin study unit as part of the U.S. Geological Survey National Water-Quality Assessment Program. The objective of this study was to assess the water-quality conditions in selected
December 31, 2000

Water-quality and biological community characterization at selected sites on the Eagle River, Colorado, September 1997 and February 1998

Two sampling trips were undertaken in 1994 to determine the distribution of trace elements in the Upper Rio Grande and several of its tributaries. Water discharges decreased in the main stem of the Rio Grande from June to September, whereas dissolved concentrations of trace elements generally increased. This is attributed to dilution of base flow from snowmelt runoff in the June samples. Of the th
By
Ecosystems, Toxic Substances Hydrology, Environmental Health Program
December 31, 2000

Trace elements were analyzed in streambed-sediment samples collected from 16 sites and in fish-liver samples collected from 14 sites in the Upper Colorado River Basin in Colorado as part of the National Water-Quality Assessment program. Sites sampled represented agricultural, mining, mixed, and urban/recreation land uses and background conditions. The results for 15 trace elements in streambed-sed
By
Colorado Water Science Center
January 31, 1999

Water-quality characteristics of the Slate and East Rivers, Colorado, during the winter recreational season, December 1996

Periods of population influxes during winter recreation occur simultaneously with periods of extreme low flow in many Rocky Mountain areas. The ability of streams to assimilate additional nutrient loading is reduced by the low-flow conditions. Low-flow water-quality characteristics of the Slate and East Rivers, which drain the Crested Butte area, were investigated in December 1996. Six sites were
By
Colorado Water Science Center
December 31, 1998

Streambed-sediment samples were collected in the Southern Rocky Mountains physiographic province in the Upper Colorado River Basin in Colorado to characterize the occurrence and distribution of trace elements in mined and nonmined areas of the basin. During October 1995 and September 1996, streambed sediment was collected at 37 sites, and the samples were analyzed for trace elements. The ranges in
August 31, 1998

As part of the Rio Grande Valley National Water-Quality Assessment Program, samples were collected at 34 sites in the upper Rio Grande Basin in Colorado and New Mexico during June and September 1994. The focus of the sampling was on trace-element concentrations in the water column, suspended sediment, and bed material. Water-column samples were analyzed for major constituent, nutrient,
By
New Mexico Water Science Center
May 31, 1998

The Upper Colorado River Basin (UCOL) is one of 59 National Water-Quality Assessment (NAWQA) study units designed to assess the status and trends of the Nation?s water quality (Leahy and others, 1990). The UCOL study unit began operation in 1994, and surface-water-quality data collection at a network of 14 sites began in October 1995 (Apodaca and others, 1996; Spahr and others, 1996). Gore Creek,
By
Colorado Water Science Center