Early development is a sensitive window for estrogenic endocrine disruption in largemouth bass. Atrazine treatments caused changes to gene expression patterns that were both similar to estrogen and distinct from estrogen.

Endocrine disrupting contaminants are chemicals that can interact with hormone systems, either mimicking or disrupting the activity of natural hormones. These chemicals can interfere with growth, development, and reproduction in fish and wildlife. The Chesapeake Bay Watershed is one region where signs of exposure to these chemicals have been observed. A high proportion of male bass in this area have “intersex” gonads, meaning they have eggs (typically only found in female ovaries) in their testes.

There are numerous chemicals present in watersheds like the Chesapeake Bay. One common example is the pesticide atrazine. The concentration of atrazine in Chesapeake Bay water is correlated with increased intersex among male bass. Atrazine has been shown by many researchers to act like a female hormone (estrogen) in fish. Water concentrations of atrazine, like other agricultural chemicals, are typically highest during the spring when they are applied to crops. Spring rains also wash the pesticides into nearby waterways. Fish also reproduce during the spring, leading to particular concern about chemical exposures to fish during early development.

To learn more about how atrazine might cause intersex in fish, we ran the experiment described here. We tested the idea that atrazine acts like a female hormone in juvenile largemouth bass in the laboratory. To do this, we exposed largemouth bass to a range of doses of atrazine (Figure 1). We also exposed fish to ethinylestradiol (EE2), a strong estrogen (female hormone) that we used as a positive control. The positive control shows how the fish react to a known feminizing chemical. Then we compared the effects of atrazine to the positive control to know if the atrazine was also feminizing the fish. The largemouth bass were exposed to these treatments from just after hatching until the beginning of sexual development. At the conclusion of the exposure, we measured effects on gene expression and gonad development.

We found that gene expression changes in gonad tissue supported the idea that atrazine induces some estrogen-like responses in the developing gonad. However, atrazine-specific and estrogen-specific responses were also observed when comparing the groups of fish (Figure 2). Interestingly, both the atrazine and estrogen most strongly affected the groups of genes that contribute to making and transporting proteins. As expected, many genes were expressed differently in male fish compared to female fish.

Return to Biochemistry and Physiology 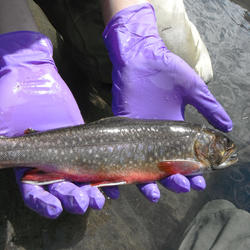 The Fishing and Hunting integrated science team focuses on contaminant and pathogen exposures in the environment that could impact the presence and vitality of fish and wildlife populations that drive commercial, recreational and subsistence activities such as hunting and fishing. If actual risks are identified this project will inform how to economically and effectively minimize risk by providing...
By
Ecosystems, Environmental Health, Contaminant Biology, Environmental Health Program, Toxic Substances Hydrology
link
August 23, 2018

The Fishing and Hunting integrated science team focuses on contaminant and pathogen exposures in the environment that could impact the presence and vitality of fish and wildlife populations that drive commercial, recreational and subsistence activities such as hunting and fishing. If actual risks are identified this project will inform how to economically and effectively minimize risk by providing...
Learn More
September 25, 2020