At more than five feet tall with brilliant white plumage, black primary feathers, a red cap, and yellow eyes, the highly endangered Whooping Crane (Grus americana) is one of the most spectacular birds native to North America. In 1942 there were fewer than 20 birds in the flock that migrates from Wood Buffalo National Park in Canada to Aransas National Wildlife Refuge in Texas. An additional six cranes were alive in Louisiana, bringing the total global population to only 22 individuals. The non-migratory Louisiana flock died out a few years later; hence all Whooping Cranes now alive derive from a core flock of only 16 birds. Whooping Cranes were likely uncommon even before hunting and habitat loss reduced them to dangerously low numbers. The vanishingly small population of 16 in 1942 represents an extreme genetic and demographic bottleneck that few species survive.

Biologists at the USGS Patuxent Wildlife Research Center began what is now the largest Whooping Crane captive breeding program from 12 eggs collected from the wild in 1967. The Patuxent flock now has over 60 adult Whooping Cranes, including 29 pairs, who lay an average of 40 eggs each breeding season.

Why is the Whooping Crane Endangered?

While several factors have contributed to the current status of Whooping Cranes, the primary reasons are habitat loss and past rampant, unregulated hunting for their meat and feathers.

Whooping Cranes live in wetlands and the success of Whooping Crane populations depend on the health of wetland ecosystems.  Over time, wetlands across North America have been drained for agriculture and damaged through development, oil and gas exploration, and the construction of intercoastal waterways.

Whooping Cranes have also been hunted, both for their meat and plumage.  The long, beautiful feathers were fashionable adornments to hats and clothing. Humans have also robbed crane nests because collectors pay high prices for rare eggs.  And while shooting the endangered cranes is now against the law, the bodies of Whooping Cranes are occasionally discovered after being shot.

Since humans contributed to the decline of the Whooping Crane, many people now feel that we have a moral duty to help this magnificent bird. Our natural heritage of biological diversity - all of the species of plants and animals - is a precious resource.  Our future quality of life depends on how we take care of our natural inheritance.

History of the Patuxent Breeding Program

Historically, the Whooper's breeding range stretched from Alberta, Canada to the southern end of Lake Michigan. The wintering grounds included parts of northern Mexico, the Texas Gulf coast, and parts of the Atlantic coast. There were groups of non-migratory whoopers that lived in Louisiana, and possibly some other areas in the southeastern United States. There was a sharp decline of the population of whoopers starting in the 1800s due to man-made changes of habitat, hunting, and feather and egg collecting.

In 1937, fewer than 20 birds remained, all in a population that wintered in Texas. The Aransas National Wildlife Refuge was established in that year to protect the Whooping Crane and its habitat.  By 1941, biologists at zoos tried to breed Whooping Cranes in captivity.  In 1966, biologists at the Patuxent Wildlife Research Center began a captive breeding program from 12 eggs collected from the wild in an effort to increase flock numbers.

Along with the collected eggs, Canus, a young Whooping Crane, named as a symbol of cooperation between Canada and the United States, was a long-time participant in both the Fish and Wildlife Service’s (FWS) and the USGS efforts to preserve and restore wild Whooping Crane populations in North America.  Canus was rescued from the wild with a fractured wing in 1964 when there were just 42 Whooping Cranes left in world.  After a period of time in Colorado, Canus was shipped to Maryland in 1966 to become the first Whooping Crane in the endangered species recovery program at Patuxent.  He sired a large portion of the Whooping Cranes in captivity and is the progenitor of many that have been released in the wild. The first Whooping Crane to fledge in the US in 60 years, is a descendent of Canus. 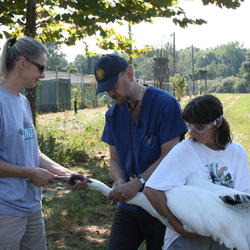 The Challenge: In eastern North America there is a viral disease called Eastern Equine Encephalitis, or EEE. This virus is transmitted among native bird species by the mosquito, Culiseta melanura, but does not cause disease in these passerine species. However, the virus is capable of causing severe disease or death in horses, some game bird species, humans and whooping cranes. In the fall of 1984...
By
Ecosystems, Species Management Research Program, Eastern Ecological Science Center
link
March 13, 2018

The Challenge: In eastern North America there is a viral disease called Eastern Equine Encephalitis, or EEE. This virus is transmitted among native bird species by the mosquito, Culiseta melanura, but does not cause disease in these passerine species. However, the virus is capable of causing severe disease or death in horses, some game bird species, humans and whooping cranes. In the fall of 1984...
Learn More
link 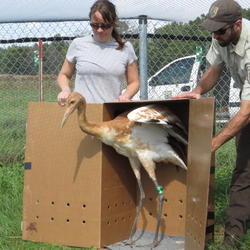 The Challenge: Whooping cranes have been successfully introduced using costume rearing techniques in either a direct autumn release or in an ultralight led migration from Wisconsin to Florida. In Florida, we have also released parent-reared whooping cranes. Not much is known about the learning that takes place in this K-selected species over the almost one year that the young whooping crane colt...
By
Ecosystems, Species Management Research Program, Eastern Ecological Science Center
link
December 19, 2016

The Challenge: Whooping cranes have been successfully introduced using costume rearing techniques in either a direct autumn release or in an ultralight led migration from Wisconsin to Florida. In Florida, we have also released parent-reared whooping cranes. Not much is known about the learning that takes place in this K-selected species over the almost one year that the young whooping crane colt...
Learn More 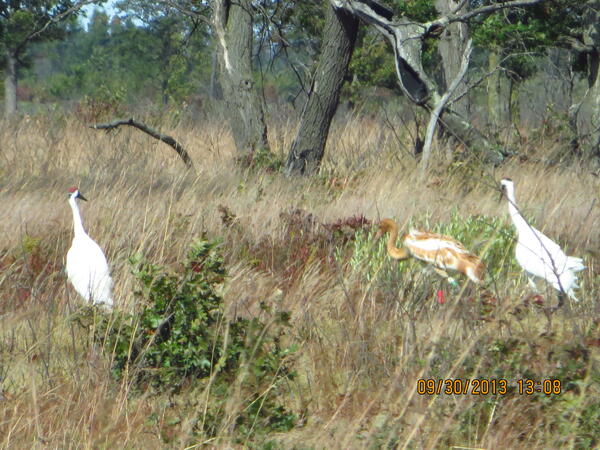 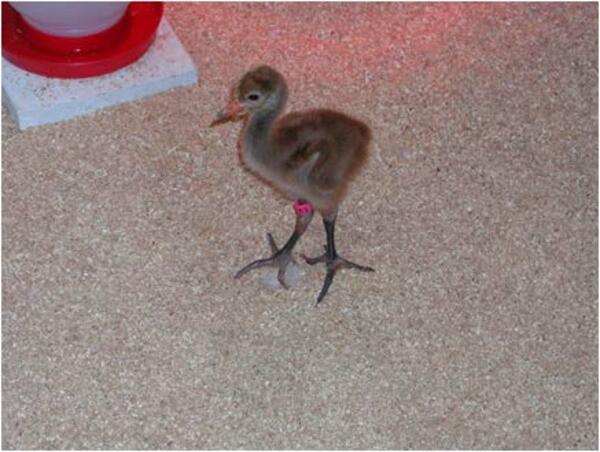 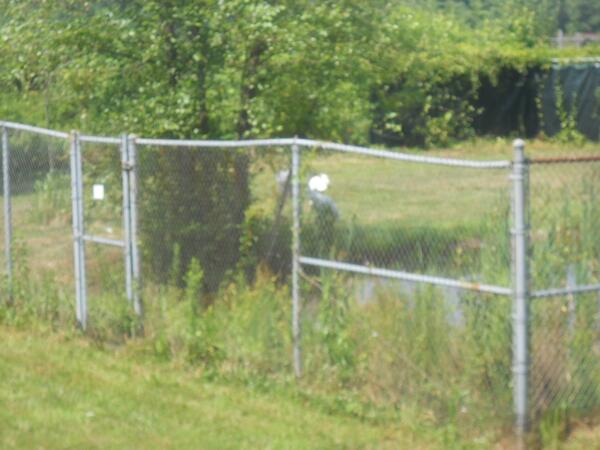 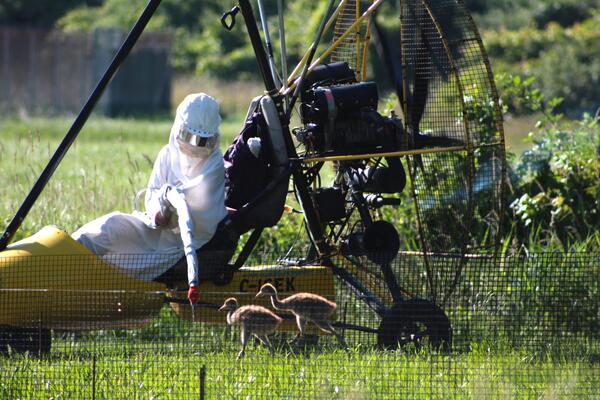 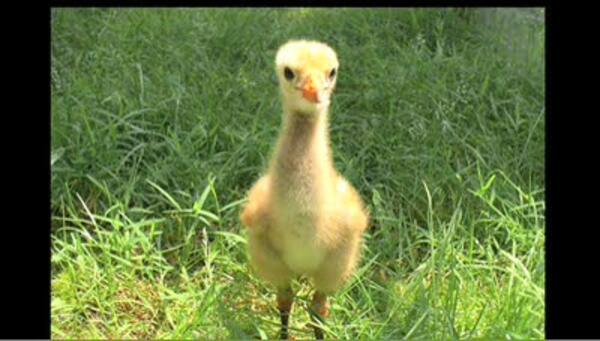 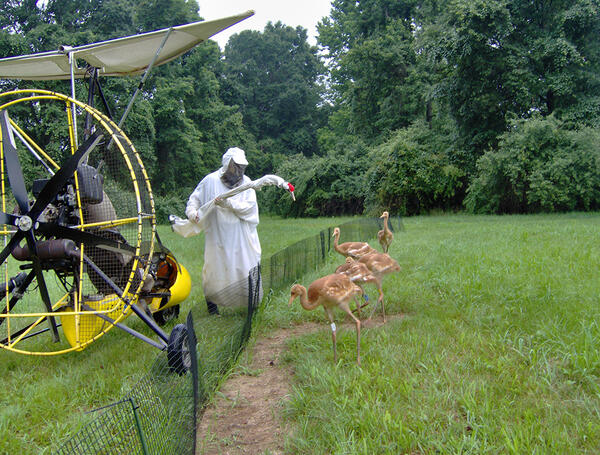 Anthropogenic changes in climate and land use are driving changes in migration patterns of birds worldwide. Spatial changes in migration have been related to long-term temperature trends, but the intrinsic mechanisms by which migratory species adapt to environmental change remain largely unexplored. We show that, for a long-lived social species, older birds with more experience are critical for in
By
Ecosystems, Eastern Ecological Science Center, Patuxent Wildlife Research Center
August 4, 2016

Adaptive management for improving species conservation across the captive-wild spectrum

Conservation of endangered species increasingly envisages complex strategies that integrate captive and wild management actions. Management decisions in this context must be made in the face of uncertainty, often with limited capacity to collect information. Adaptive management (AM) combines management and monitoring, with the aim of updating knowledge and improving decision-making over time. We p
By
Ecosystems, Eastern Ecological Science Center, Patuxent Wildlife Research Center
May 2, 2016

Time within reproductive season, but not age or inbreeding coefficient, influences seminal and sperm quality in the whooping crane (Grus americana)

All living whooping cranes (Grus americana) are descended from 16 or fewer birds that remained alive in the early 1940s, a bottleneck that puts the species at potential risk for inbreeding depression. Although AI is commonly used in the management of the captive population of this species, little is known about seminal traits or factors affecting sperm quality in the whooping crane. In the present
By
Ecosystems, Eastern Ecological Science Center, Patuxent Wildlife Research Center
September 29, 2014

Vision has been investigated in many species of birds, but few studies have considered the visual systems of large birds and the particular implications of large eyes and long-life spans on visual system capabilities. To address these issues we investigated the visual system of the whooping crane Grus americana (Gruiformes, Gruidae), which is one of only two North American crane species. It is a l
By
Ecosystems, Eastern Ecological Science Center, Patuxent Wildlife Research Center
June 4, 2014

Demography of a reintroduced population: moving toward management models for an endangered species, the whooping crane

The reintroduction of threatened and endangered species is now a common method for reestablishing populations. Typically, a fundamental objective of reintroduction is to establish a self-sustaining population. Estimation of demographic parameters in reintroduced populations is critical, as these estimates serve multiple purposes. First, they support evaluation of progress toward the fundamental ob
By
Ecosystems, Eastern Ecological Science Center, Patuxent Wildlife Research Center
November 1, 2013

Nest success is a critical determinant of the dynamics of avian populations, and nest survival modeling has played a key role in advancing avian ecology and management. Beginning with the development of daily nest survival models, and proceeding through subsequent extensions, the capacity for modeling the effects of hypothesized factors on nest survival has expanded greatly. We extend nest surviva
By
Ecosystems, Eastern Ecological Science Center, Patuxent Wildlife Research Center
September 3, 2013

Successful bird migration can depend on individual learning, social learning, and innate navigation programs. Using 8 years of data on migrating whooping cranes, we were able to partition genetic and socially learned aspects of migration. Specifically, we analyzed data from a reintroduced population wherein all birds were captive bred and artificially trained by ultralight aircraft on their first
By
Ecosystems, Eastern Ecological Science Center, Patuxent Wildlife Research Center
August 7, 2013

A matter of tradeoffs: reintroduction as a multiple objective decision

Worldwide, approximately 168 bird species are captive-bred for reintroduction into the wild. Programs tend to be initiated for species with a high level of endangerment. Depressed hatching success can be a problem for such programs and has been linked to artificial incubation. The need for artificial incubation is driven by the practice of multiclutching to increase egg production or by uncertaint
By
Ecosystems, Eastern Ecological Science Center, Patuxent Wildlife Research Center
June 19, 2012

The release of animals to reestablish an extirpated population is a decision problem that is often attended by considerable uncertainty about the probability of success. Annual releases of captive-reared juvenile Whooping Cranes (Grus americana) were begun in 1993 in central Florida, USA, to establish a breeding, non-migratory population. Over a 12-year period, 286 birds were released, but by 2004
By
Ecosystems, Eastern Ecological Science Center, Patuxent Wildlife Research Center

This week marks a significant milestone in the conservation and recovery of the endangered whooping crane. On March 11 and 13, the U.S. Geological...

Bird migration patterns are changing rapidly worldwide due to climate and land use changes, and in the case of the endangered whooping crane, its age...

Four whooping crane chicks raised in captivity began their integration into the wild Saturday as part of the continuing effort to increase the wild...