"The Team enabled the establishment and continuation of a worldwide ‘gold standard’ for image quality and coverage that has come to epitomize the Landsat satellites.”

The Landsat 5 Flight Operations Team earned the 2020 Group Pecora Award. A true workhorse, Landsat 5 collected data for more than half of the Landsat Program’s 50 years, from shortly after its launch in 1984 until just after the launch of Landsat 8 in 2013.

The Pecora Awards, sponsored by the Department of the Interior and NASA, are presented annually to individuals or teams who have used remote sensing to make outstanding contributions toward understanding the Earth, educating budding scientists, informing decision makers or supporting disaster response.

The citation St. Germain read also recognized a couple of Landsat 5’s noteworthy views, including being the first satellite to image the Chernobyl nuclear accident and to detail the extent of tropical deforestation.

“Throughout its life, the satellite and payloads battled numerous anomalies, which put the mission at risk.  However, the Team found novel, creative approaches to resolve the issues, allowing Landsat 5 to continue operations into its third decade,” St. Germain continued. “In doing so, the Team enabled the establishment and continuation of a worldwide ‘gold standard’ for image quality and coverage that has come to epitomize the Landsat satellites.”

Steven Covington, systems director with The Aerospace Corporation at Goddard Space Flight Center and a Principal Systems Engineer for the USGS National Land Imaging Program, accepted the award on behalf of the Landsat 5 Flight Operations Team.

Covington started off recognizing the importance of the people who had designed, built, launched and operated the satellite, and then he shared his memories of the beginning and end of Landsat 5’s operating life.

“In 1984, March 1st, I was a young engineer—12 years old, I think—at EROS (USGS Earth Resources Observation and Science Center) watching the launch of Landsat 5. And 29 years, 3 months, 5 days later, I was surrounded by good friends of the Flight Operations Team, the men and women who made that mission fly through bad batteries, two bad solar array drives, bad communications systems, bad gyros—all those different things that were overcome by the ingenuity of the team and brought back to life so the mission could continue operation and collecting that data through that last decade. Those people all surrounded me while we pushed the button that turned off the satellite on June 5th, 2013,” Covington said.

“The amazing thing that really makes it an interesting and important award for those of us on the team is the importance that Landsat 5 really was to the world. … Of the just a little bit over 10 million scenes in the Landsat archive, almost 4 million of them come from Landsat 5. Consider that. We’re on Landsat 9 right now, and yet 40 percent of the images in the archive come from Landsat 5 alone.” 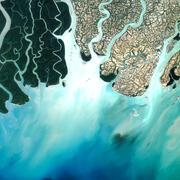 Images of Earth are so common these days that it’s easy to forget that these illuminating visuals are actually grounded in remote sensing data that relies on advanced technology.