Barred owls (Strix varia) have expanded their geographic range from eastern to western North America, and their newly expanded range now completely overlaps that of the federally threatened northern spotted owl (S. occidentalis caurina; Gutiérrez et al. 2007, Livezey 2009, USFWS 2013). Evidence from long-term demographic studies indicates that the presence of barred owls has contributed significantly to declines in spotted owl populations over the past two decades (Anthony et al. 2010, Forsman et al. 2011, Dugger et al. 2015). Interspecific competition with an increasing number of barred owls that establish and defend their territories in habitats occupied by spotted owls may explain why populations of spotted owls have continued to decline even though considerable amounts of forested habitat has been conserved throughout the subspecies’ range. Previous research by USGS (Wiens et al. 2014) showed that the presence of barred owls can alter the behavior and fitness potential of spotted owls, as shown by changes in movements, habitat use, and reproductive output of spotted owls exposed to varied levels of spatial overlap with recently established barred owls.

The goal of the study is to test the research hypothesis that the population rate of change of spotted owls, or one of the demographic components driving population change (survival, reproduction, recruitment, site occupancy dynamics), is negatively influenced by the presence of barred owls. The removal study will be conducted over at least four years to allow sufficient time for populations of both species to respond to experimental treatments (USFWS 2013). Specific objectives of this study are to:

The study will be spatially replicated on up to four study areas distributed over the range of the northern spotted owl, including one in Washington (Cle Elum), two in Oregon (Coast Ranges, Union/Myrtle/Klamath), and one in northern California (Hoopa/Willow Creek). These areas were selected based on many considerations, including availability of pre-treatment demographic information on spotted owls, land ownership, and the need to identify the effect of barred owls on spotted owls across the broad range of forest conditions occupied by both owl species (USFWS 2013).

With the exception of the Union/Myrtle treatment areas in southwestern Oregon, all experimental study areas are part of a long-term demographic monitoring program for northern spotted owls established under the Northwest Forest Plan (Lint et al. 1999, Davis et al. 2011). All study areas, including Union/Myrtle, contain greater than 20 years of mark-recapture data on spotted owls and between 55 and 198 historical spotted owl sites each (total number of historical spotted owl sites = 471). The study areas are comprised of mostly federal lands, but some field work may occur on adjacent private lands with the permission of the landowner because of the mixed composition of land ownership in some areas. Including a mixture of ownership is important in order to understand the effects of experimental barred owl removal across the wide range of barred owl densities and forest habitat conditions that occur within the range of the spotted owl. The study areas vary in climate, vegetation composition, and topography, but all are dominated by conifer or mixed conifer-hardwood forests (Dugger et al. 2015).

The study uses a before-after, control-impact experimental design, where barred owls will be removed from treatment areas that have been monitored for both species prior to the treatments, to compare with data after barred owl removals begin to see if there is a positive response in populations of spotted owls in the treatment areas. To designate treatment and control areas, we identified continuous blocks in each area with similar conditions with respect to: 1) number of historical spotted owl territories needed in each control and treatment area (n=50) to reliably detect changes in population trends and site-occupancy dynamics (Johnson et al. 2008, USFWS 2013), and 2) forest structural conditions within owl sites, based on previous research suggesting that the presence of barred owls may interact with forest structural characteristics around nesting areas to affect site-occupancy dynamics of spotted owls (Dugger et al. 2011, Sovern et al. 2014).

Species-specific surveys of spotted owls and barred owls will be conducted on control and treatment portions of each study area during the breeding season (1 Mar – 31 Aug). For spotted owls, surveys and demographic monitoring will continue to be conducted by biologists and agencies already responsible for the long-term demographic monitoring of northern spotted owls under the Northwest Forest Plan (Lint et al. 1999, Davis et al. 2011). Survey and monitoring of spotted owls will be based on historically occupied breeding territories that have been consistently monitored since 1990 so that results from the experiment are consistent with previous analyses of population demography and occupancy dynamics of spotted owls ((Anthony et al. 2006, Forsman et al. 2011, Dugger et al. 2015).

Barred owls will be surveyed on treatment and control portions of all study areas to locate barred owls for removals and document pre- and post-treatment changes in the site-specific probability of occupancy, extinction, and colonization. Our study will use a survey protocol specifically developed for barred owls (USFWS 2013) in combination with the general occupancy survey design developed by Wiens et al. (2011) to track annual changes in site occupancy dynamics and areas used by barred owls on control and treatment areas.

Following USFWS (2013) and Diller et al. (2014), this study will primarily use lethal removal methods for barred owls, but non-lethal removals will also be used in cases where previous arrangements have been made to relocate live captures. Lethal removal of barred owls detected in treatment areas during breeding season surveys will be accomplished using a 12- or 20-guage shotgun with non-toxic bird shot. For non-lethal removals, barred owls will be captured with baited Dho-gaza nets, baited mist nets, snare poles, noose poles, pan traps, or by hand (Clark, 1981; Forsman, 1983). Our protocol for removals prohibits collection of nesting barred owls with dependent young (USFWS 2013). As a consequence, removals will generally occur during the nonbreeding season (Sep – Mar), especially during fall and winter months after young have gained independence from adults and dispersed from their natal areas. We anticipate frequent colonization of barred owls into areas where barred owls have been removed (Yackulic et al. 2014, Diller et al. 2014). Once a pair of barred owls is removed from a site, we will attempt to conduct regular follow-up visits to determine re-colonization rates of treatment areas by barred owls following removals. Appropriate federal and state permits for removals were obtained prior to any removal activities. All carcasses of barred owls removed from experimental treatment areas will be collected, measured, and preserved as museum specimens for many future scientific studies. 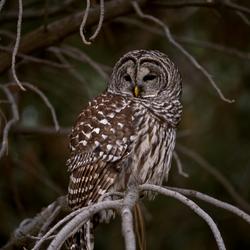 As an apex predator and fiercely territorial invader, barred owls at high densities have the potential to affect a variety of native wildlife through competition, niche displacement, and predation. Such impacts may be especially problematic for conservation of the federally threatened northern spotted owl, whose populations have continued to decline despite widespread protection of old forest...
By
Forest and Rangeland Ecosystem Science Center
link
November 14, 2017

As an apex predator and fiercely territorial invader, barred owls at high densities have the potential to affect a variety of native wildlife through competition, niche displacement, and predation. Such impacts may be especially problematic for conservation of the federally threatened northern spotted owl, whose populations have continued to decline despite widespread protection of old forest...
Learn More

Populations of Northern Spotted Owls (Strix occidentalis caurina; herineafter referred to as Spotted Owl) have declined throughout the subspecies’ geographic range. Evidence indicates that competition with invading Barred Owls (S. varia) has contributed significantly to those declines. A pilot study in California showed that removal of Barred Owls coupled with conservation of suitable habitat cond
By
Ecosystems, Wildlife Program, Forest and Rangeland Ecosystem Science Center
May 20, 2018

Evidence indicates that competition with invasive barred owls (Strix varia) is causing rapid declines in populations of northern spotted owls (S. occidentalis caurina), and that the long-term persistence of spotted owls may be in question without additional management intervention. A pilot study in California showed that removal of barred owls in combination with habitat conservation may be able t
By
Ecosystems, Wildlife Program, Forest and Rangeland Ecosystem Science Center
March 14, 2016

Evidence indicates that competition with newly established barred owls (Strix varia) is causing rapid declines in populations of northern spotted owls (Strix occidentalis caurina), and that the longterm persistence of spotted owls may be in question without additional management intervention. A pilot study in California showed that lethal removal of barred owls in combination with habitat conserva
By
Ecosystems, Wildlife Program, Forest and Rangeland Ecosystem Science Center