This project helped to streamline the workflow from geophysical data acquisition to data distribution, and additionally provided user support for integration and interpretation of these complex data sets. There were four main objectives: 1) contracting geophysical surveys, 2) converting data from analog to digital format, 3) archiving, retrieving, and integrating geophysical data, and 4) outreach.

Why did USGS update their geophysical data sets?

Since the 1940s, the USGS has spent millions of dollars conducting airborne geophysical surveys. This trend continues as the USGS contracts commercial vendors to acquire new geophysical data sets that support research within the Mineral Resource Program and other USGS Programs. These government-funded data sets are valuable products that the USGS provides to both internal and external users.

What did USGS do to these data sets?

This Project helped to streamline the workflow from data acquisition to data distribution, and additionally provided user support for integration and interpretation of these complex data sets.

There were four main objectives:

Contracting Geophysical Surveys: The collection of airborne geophysical data is mostly contracted to commercial vendors. As such, the Federal Government requires that the contracts are overseen by a Contracting Officer’s Representative. The Project supported this role and worked with USGS scientists and the Office of Acquisition and Grants to ensure that all legal obligations were met. The Contracting Officer’s Representative maintains a catalog describing each survey.

Converting Data from Analog to Digital Format: Many vintage USGS airborne survey data sets were only available as scanned contour maps. These data could be easily integrated within geographic information systems (GIS). However, the contour lines needed to be digitized and attributed allowing the data to be fully leveraged and manipulated within modern geophysical data processing software packages. This project performed the digitization task for known data gaps across the U.S. and for specified areas defined by other Mineral Resource Program projects.

Archiving, Retrieving, and Integrating Geophysical Data: USGS spatial data delivery has been rapidly evolving over the last several years. Traditionally, airborne geophysical survey data were released through USGS publications; however, increased cost and time for generating these reports have made this form of data distribution less optimal. The Project developed alternative pathways for data distribution that aligns with USGS Data Management Policy.

The Project made the data archive publicly available through the Mineral Resources On-Line Spatial Data website. These data can now be found through map interfaces and by state/county, and there are also national-scale compilations that include magnetics, radiometrics, and gravity.

Outreach: We addressed geophysical data questions from the public, as well as USGS scientists. The questions covered airborne and ground-based geophysical surveys with methods that include: magnetics, gravimetrics, radiometrics, and resistivity. The solutions sometimes involved data integration and manipulation that demonstrated the utility of these data sets when exploring for mineral deposits. 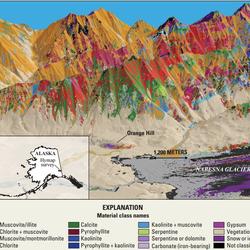 Aeromagnetic data helped us to understand the 3D distribution of plutonic rocks near the Pebble porphyry copper deposit in southwestern Alaska, USA. Magnetic susceptibility measurements showed that rocks in the Pebble district are more magnetic than rocks of comparable compositions in the Pike Creek–Stuyahok Hills volcano-plutonic complex. The reduced-to-pole transformation of the aeromagnetic dat
By
Geology, Minerals, Energy, and Geophysics Science Center, Geology, Geophysics, and Geochemistry Science Center
October 31, 2009

Aeromagnetic and Aeroradiometric Data for the Conterminous United States and Alaska from the National Uranium Resource Evaluation (NURE) Program of the U.S. Department of Energy

The National Uranium Resource Evaluation (NURE) program was initiated in 1973 with a primary goal of identifying uranium resources in the United States. The airborne program's main purpose was to collect radiometric data of the conterminous United States and Alaska. Magnetic data were also collected. After the program ended, most of the data were given to the U.S. Geological Survey (USGS). All