Denali National Park (DENA) is a major draw for tourism and recreation and a major economic engine for central Alaska. However, the geologic forces that created the steep landscape of DENA also make it prone to geologic hazards (geohazards) like landslides, debris flows, and earthquakes. DENA has only one major road, called the ‘Park Road’, that serves nearly all of its infrastructure.

Since 2017 the National Park Service (NPS) and the USGS National Cooperative Geologic Mapping Program have partnered to produce a new high-resolution geologic map of the Park Road corridor to identify and address ongoing geohazards. This map is foremost helping to guide a new route for the Park Road around an area of landslide-prone slopes, where ongoing slumping is costing NPS millions of dollars in annual maintenance costs. Beyond this area, the map serves as a park resource to assess geohazard risk in future infrastructure and management decisions. Geologic mapping is also fueling new research in understanding the geologic and tectonic history of DENA, while training a new generation of geologic mappers through the USGS EDMAP program.

DENA is home to iconic and breathtaking landscapes surrounding the tallest mountain range in North America. It has about 6 million acres of wild land that provides opportunities for recreation, subsistence hunting and gathering, preservation of cultural resources, and scientific research. According to NPS statistics, in 2017, DENA received more than 600,000 visitors, resulting in $632 million in visitor spending in the park and nearby communities; 8,150 jobs; and $924 million in general economic output.

The 92-mile Park Road (fig. 1) is mostly gravel; only 16 percent is paved. It is the only access for most DENA infrastructure, including visitor centers, staff facilities, campgrounds, and businesses. The success of DENA as a visitor destination, an economic engine, and a safe environment for visitors, residents, and staff relies on the resilience of the Park Road, making it a major transportation lifeline for the region.

The Park Road crosses a steep, constantly changing landscape, shaped by the rapid uplift of the Earth’s crust along the central part of the Alaska Range, by glacier and meltwater erosion, and by permafrost heaving. The combination of high relief, fractured bedrock, and severe climate creates large areas of shifting ground and unstable slopes. Geohazards (fig. 2) cause significant damage to the Park Road every year, requiring periodic closure, and costing millions of dollars in repair and maintenance.  In addition, DENA is situated along major fault system, and experiences numerous earthquakes every year.  Most are too weak to be felt, but a 7.9 magnitude earthquake shook the region in 2002, and at least one major landslide, which formed Bergh Lake along the Park Road corridor, was caused by seismic shaking in 1953 (Capps, D.M., Rosenberg, R., Collins, A., Anderson, D.A., Hooper, S., Rogers, H., Collins, B., and Bilderback, E., 2017, Geohazards risk assessment of the Denali National Park Road, in Proceedings North American Symposium on Landslides, Roanoke, Va., Association of Environmental & Engineering Geologists).

The central portion of the Park Road crosses steep topography in the Polychrome Overlook area. This section is the most immediate infrastructure concern because it crosses active several landslides (fig. 2,3). Maintaining the current road course (2020) is costly and poses a high risk to DENA staff and visitors. However, closing the road to vehicle traffic would greatly restrict visitor access, and negatively affect tour businesses operating within the park.

Thus, NPS is considering options for rerouting the road, either to the north or southeast of its current path (fig. 3A). New surficial geologic mapping in this region will help identify potential geohazards and define geologic substrates in the areas of rerouting (fig. 3B). This will help road engineers ensure safe, cost-efficient, and resilient road infrastructure can be built and maintained for the long term.

The USGS and the NPS are collaborating with colleagues at Purdue University to date glacial sediments using cosmogenic nuclide exposure methods. Multiple generations of Pleistocene glaciers have crossed the Sanctuary River valley south of the Park Road. The glacial sediments left behind are all crosscut by active faults (fig. 4). In general, the oldest sediments show the most surface offset along faults, whereas modern streams show the least. Dating of the glacial deposits therefore constrains (1) the history and timing of glaciation in the central Alaska Range, and (2) rates of fault slip and paleoseismicity (earthquake timing) posing earthquake hazards to NPS infrastructure. This scientific research contributes to both geohazard assessment and furthering understanding of the geologic history of Denali National Park. 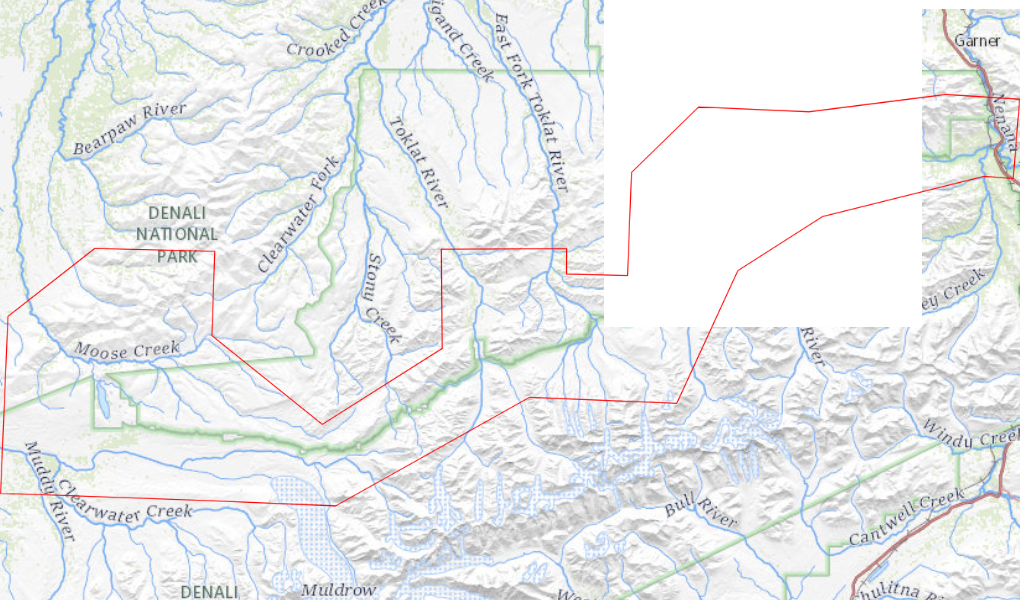 Denali National Park (DENA) is home to iconic and breathtaking landscapes surrounding the tallest mountain range in North America, the Alaska Range. The park, which covers 6 million acres, is a major draw for tourism and recreation, making it an important economic engine for central Alaska. However, the geologic forces that created the beautiful, steep landscape of DENA also make it prone to geolo
By
Geosciences and Environmental Change Science Center

This work is jointly supported by the FEDMAP and EDMAP sections of the USGS National Cooperative Geologic Mapping Program, the USGS Natural Resource Preservation Program and the Denali National Park and Preserve. Our work has been in collaboration with Marc Caffee (PRIME Lab), Ken Ridgway (Purdue University), Brent Goehring (Tulane University), Sar